A novel of tremendous imagination, Neil Smith's Boo tells the story of Oliver "Boo" Dalrymple, who arrives in heaven after dying of an apparent heart defect in front of his locker. But Boo's afterlife – his nickname forced upon him for his ghost-white complexion and appearance – is unlike any documented thus far.

For starters, "Town," as Heaven is referred to, is bracketed off by age and nationality, making this particular environment the domain of 13-year-old Americans. (There are murmurs of a Canadian version to the north, a Mexican one to the south and a Chinese one nearby). "Forget the brooks, mountains, waterfalls, and forests," Oliver writes. "To get a good picture of Town, imagine instead a vast housing project." As Oliver, a junior researcher and evangelist of the scientific method, goes about discovering his new home – with its imperfect plumbing, lobster towels and hand-me-down clothes – another boy from his childhood arrives, bearing startling news about the circumstances of their deaths. A school shooting, a revolver, a scream in the hallways. Thinking the shooter – "Gunboy" – may be hiding in plain sight, Oliver and his new friends set out to track him down and their discoveries unveil themselves at a fantastic pace.

Simply put, Boo is a beautiful book. It not only features a captivating plot of adventure and mystery, but allows Oliver to explore the world that Smith has established for him with an intimacy and authenticity that is both rare and deserving of celebration. Much of this has to do with Smith's ability to divorce his setting from pre-existing imagery of the transcendental. Early on, Smith has Oliver rename "the god of our heaven" as "Zig." The move, which at first seems satirical, takes on a particular purpose after time; allowing Smith to collapse his readers' preconceived notions of the divine and bring some of these back when he sees fit. (Finicky territory, considering the whole afterlife thing. Boo's subject matter does have enough to perhaps draw the ire from zealots calling for its banishment). By reinventing the conditions of a setting that already seems so familiar, Smith achieves a provocative tension that even the best fiction writers strive for: He has created a world left totally open to imagination, but still susceptible to certain rules. And it is in this environment in which Oliver – socially awkward, kind of annoying and yet absolutely endearing – truly comes into his own.

It isn't all pretty, however. Smith can occasionally press a bit too firmly on Oliver's voice, offering what can seem like forced injections of quirkiness through an aside or off-handed remark, often at the expense of pace. The book is also riddled with literary references, some of which seem more relevant than others. In some moments, Smith goes to great pains to stress his themes, probably so his younger readers can feel that they are seeing everything unfold. But for a novel that so adequately captures the emotional and intellectual complexities apparent in young adults, it seems peculiar that Smith does not expect the same of his readers.

Such lapses can be disappointing, but they in no way unsettle the successes of the novel. When Smith allows his narrator to inhabit his surroundings, the results are harmonious. With Oliver's maturation, Boo proves to be less instructive about the afterlife than the one before it. Smith clearly intends his work to be not only highly readable but discussed, with issues of race, class, disability, mental health, violence and bullying addressed throughout. (One such example comes by way of Oliver's relationship with his parents, which is beautifully acknowledged but not cascaded.) There is a sadness lingering behind the pages of this book and a sensitivity that is easy to attempt but harder to capture. With Boo, Neil Smith has written something valuable and important for both young readers and older ones. We should thank Zig.

Nicholas Cameron is a journalist and writer from Toronto.

Book Review
Three fiction debuts worth a read
May 15, 2015 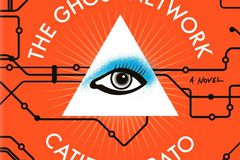 Book Review
The Globe 100: The best books of 2014
November 21, 2014
Follow us on Twitter @globebooks Opens in a new window
Report an error Editorial code of conduct
Due to technical reasons, we have temporarily removed commenting from our articles. We hope to have this fixed soon. Thank you for your patience. If you are looking to give feedback on our new site, please send it along to feedback@globeandmail.com. If you want to write a letter to the editor, please forward to letters@globeandmail.com.
Comments