For All the Men (and Some of the Women) I've Known

There is a word that appears at the end of Dock Day, one of the stories in Clea Young's impressive new collection, that neatly sums up the tenor and theme of the book. The word is "treason."

The stories in Teardown are not political in any conventional sense of the word – they are not focused on governmental machinations or the internecine warfare among powerful officeholders. Although there are power struggles aplenty in these pages, along with betrayal, suspicion, backstabbing and revenge, these themes are removed from palace halls and located instead in the more universal arena of domestic relationships and friendships. This does not represent a diminution – quite the contrary. By embedding her themes in readily recognizable situations, Young discovers a means to make them all the more resonant. The toothless old saw has it that the personal is political; the stories in Teardown are illustrative of the truth that undergirds the cliché.

Not that Young is indextrous or heavy-handed in this regard; one of the signal aspects of her writing is the lightness with which it unfurls its thematic subtext. Young's stories display a surface insouciance that is somewhat deceptive: The individual pieces are so entertaining, their execution so apparently effortless, that it is only in retrospect that they seem to accrue a deeper, more profound meaning.

Take that word – treason – from Dock Day. The context is a group of children who have been playing by the water while their parents sit on a nearby dock sipping drinks and discussing their aging bodies and subtle sexual jealousies. When the eldest child, who has appointed himself king, decides that his queen – the only girl in the group – has committed treason, he gives her a choice of eating so-called "death berries" (actually elderberries) he has picked from the adjacent foliage, or exiling herself by walking off until she is out of sight.

This brief story – told mostly in dialogue and clocking in at just under seven pages – is typical of the author's approach in Teardown. Young sets up an ironic counterpoint between the adults' conversation and the children's game, which is underscored when two of the parents commandeer a canoe and head out on the water; the woman's tossed-off comment – "I feel like the queen of this place" – making explicit the connection between the twin story strands.

Dock Day is brief and teasingly elliptical, which is a feature common to many of the other pieces in the book. Young's preference in these stories is for endings that open outward in an implicative manner, rather than offering any kind of definitive closure. Even stories that do end on a more solid note of resolution refuse to follow the expected trajectory. In Juvenile, the protagonist – a passenger on a B.C. ferry who has just spotted an ex-boyfriend and subsequently committed an act of petty thievery – rejects an offer of assistance in favour of a disavowal that shores up, in her own mind at least, her stubborn independence and self-sufficiency.

Other stories are more insistent on maintaining elements of mystery or uncertainty. The extent to which Patrice, a server in the standout entry Lamb, is willing to go to take revenge on her sexist boss is left ambiguous, and her relationship with her less worldly colleague, who narrates the story in the first person, is fraught with shifting aspects of dominance and power. The lack of a backstory for Patrice can be seen, in an unsympathetic reading, as a flaw, until one realizes that it is the less flamboyant narrator to whom we are meant to be paying attention; her final epiphany (which Young withholds until the story's very last sentence) provides the moment that renders the fiction ultimately satisfying.

Melanie is typical of the protagonists in Botha's stories, all of whom appear to be a version of the same person: needy, romantic, reckless and repeatedly drawn to the wrong kind of partner. Botha's characters freely indulge in sex and drugs and copious amounts of alcohol in their quest to find succour or peace, though it becomes readily apparent that what they are most intent on discovering – and what proves most elusive – is some sort of authentic connection with another human being.

"I like romance," says the protagonist of Valentine's Day. "I'm just afraid of being hurt." This is perhaps a mission statement for Botha's book and its cast of stumbling, searching, frequently self-deluded characters. The author is undeniably familiar with modern urban ennui, and the stories in her collection have an admirable directness and grit, at least on the surface. Underlying this surface tension, however, is a streak of yearning for romantic happiness that would not be out of place in any Disney fairy tale.

This is perhaps the most difficult aspect of the book to grapple with. The vision of romantic bliss that these characters carry across the 18 stories is undeniably pure and untainted – and finally impervious to the depredations of the world that they find themselves thrust into – but clings closely to a traditional notion of happiness as vested in an idealized version of domesticity that is probably unattainable. Botha is clear-eyed in illustrating the ways her protagonists' devotion to their vision of romantic purity is either subverted or results in the unintended consequence of alienating the very object of their longing. But the repetitive nature of these interactions – in conjunction with prose that too often resorts to obviousness or cliché on a line-by-line basis ("She felt the blood rush to her temples"; "My instincts felt like a blunt knife") – can itself have an alienating effect over the long haul.

Taken together, these two books offer forthright perspectives on modern relationships, although the tonal sameness and occasional technical infelicities that infect Botha's book are absent from Young's more accomplished work. 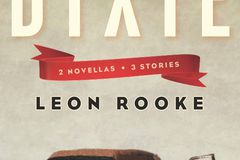