Here's a cruel joke: The next time someone asks you for a book recommendation, suggest Stephen King. If the person isn't a reader of scary stories, it'll seem like a threat: The brow will crinkle in panic; the eyes will scan frantically for an escape route. King's name alone wields an incantatory power, as though it might conjure the man himself from the shadows, staggering at you in a zombie pose with a signed copy of It.

King occupies a uniquely iconic status that few of his contemporaries, horror novelists or otherwise, have achieved – not just the voice, but also the face, of our nightmares. As a kid, I found it to be a monstrous face (David Koresh crossed with Jim Carrey's Fire Marshall Bill, as per my referents at the time), glowering grimly from his book jackets. I've long thought that when people remark that a serial killer didn't look the part, they mean that he didn't look enough like Stephen King.

As a human being, of course, King has a very different reputation – kind, generous, even lighthearted – and in recent years, especially in his short fiction, he's expanded his repertoire well beyond fright tales. Even so, that old creepmaster persona looms large. The cover of The Bazaar of Bad Dreams, his sixth collection of stories, offers both a challenge and an invitation: "Step inside my mind … if you dare," it beckons, with all the malignant hospitality of Dracula welcoming you to his castle.

It's a bit of a misrepresentation, as few of the stories here are particularly scary, though that communion with the author is reinforced throughout: As with many of King's collections, he addresses us, his "Constant Reader," in a series of preambles that illuminate each story's process, inspiration, design or excellence. These will likely strike readers on a scale between Fascinating and The Worst, proportionate to the commitment of said readers' constancy. "You write some scary stories," he explains in one particularly dubious allegory, "and you're like the girl who lives in the trailer park on the edge of town: you get a reputation."

King used to traffic almost exclusively in these sorts of cringe-inducing lines, and though his recent work has felt a little more polished, he still tends to lean on a certain set of cultural tropes. The Kingdom of The Bazaar of Bad Dreams isn't just fiction, but constructed from fictional archetypes: Here we find wise and kindly black housekeepers, a "south Texas staple … wearing jeans and a tee-shirt with the sleeves ripped off at the shoulders" who drives a pickup truck outfitted with ornamental plastic testicles, and an old white Southern judge who says things such as "don't let the door hit you in the ass on your way out."

Harold Bloom once compared Stephen King to JK Rowling, whose "mind," he claimed, "is so governed by clichés and dead metaphors that she has no other style of writing." But King's language and references feel apt to the version of America about which he writes, a place most familiar to his readers, Constant or Otherwise, from movies and TV. In a story like Bad Little Boy, for example, juvenile evil is personified by a tubby redhead in a propeller beanie straight from Saturday morning cartoons, and the inhuman overlords in Ur ("Their faces [were] reptilian. Or birdlike. Or both.") are instantly recognizable from late-night sci-fi marathons.

Stephen King has made a fine career deploying rote characters into familiar locations before disrupting everything with horror. The problem in The Bazaar of Bad Dreams, however, is that nothing goes too far awry. The weakest stories in the collection dance atop King's stock scenarios without puncturing through to the other side: A Raymond Carver pastiche neither reaches any emotional heights nor really shocks with its limp twist ending, and the harbingers of death that haunt a story set in a retirement community only ever flit about in the background.

Stories that resist drama demand a reader's empathy, but it's hard to care for characters who rarely seem much more than types, and the flatness of the writing (mostly functional, with the tone of stage directions guiding one scene to the next) fails to incite much in the way of emotional dynamics. King's readability is on full display, but here it has the numbing effect of prime-time television: just interesting enough to keep our faces pointed at the page, but never engaging us beyond passive entertainment.

Maybe King is writing against his better instincts, courting the sort of "literary" esteem that has evaded him for most of his career. Many of the stories in The Bazaar of Bad Dreams have appeared in prestigious places such as The New Yorker, Harper's and The Atlantic. But I, for one, don't read Stephen King for his meditations on morality or his insights into marriage, and it's almost a relief when gore ruptures those staid scenarios: In an otherwise nondescript tale, he writes that an idea "can wriggle in there like a bloodworm, lay its eggs, and pretty soon your whole brain is squirming with maggots."

King's introduction casts these stories, as per the book's title, as wares (with himself as proprietor), concluding, "Feel free to examine them, but be careful. The best of them have teeth." While I appreciate the concern for my well-being, I'm not sold. I wish everything here were a little toothier, a little sharper, a little more edgy and dangerous, and a whole lot less safe. For author Ransom Riggs, the endless allure of his wife (and Stephen King)
May 11, 2018 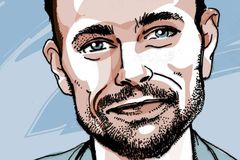 The lingering irreverence of R.L. Stine’s Goosebumps series
May 15, 2018 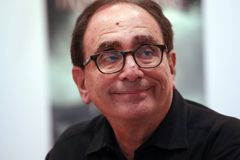