"It's absolutely impossible that other people should understand Ulysses as Joyce understands it," she exploded in a letter to a friend. "It's almost revolting to hear him discuss its difficulties. It contains code words that must be picked up in each paragraph and so on. The Question and Answer part can be read astronomically or from the geological standpoint or – oh, I don't know!"

I was reminded of this because I felt a similar fulminating frustration on first reading A.L. Kennedy's latest novel, The Blue Book, a postmodern (?) mishmash of flashbacks, stream-of-consciousness soliloquies,

numbered codes and whimsical-seeming addresses to an unknown "you," whom readers will reasonably though mistakenly assume refers to them. Under this mess of fractured narrative, however, lies a real story: a love story, a story of need and grief and guilt and loss and a tenderness so piercing it's almost unbearable. But it'll take you at least two readings and the patience of Job to uncover it.

We begin, insofar as straightforward narrative is concerned (which is not where the novel itself begins), with Elizabeth (Beth) Barber, a woman whose salient features appear to be a tendency toward (mental) self-flagellation and a restive intelligence that, alighting on everything, leaves nothing unscathed.

Beth is about to board a cruise ship in Southampton for the seven-day passage to New York; with her is her partner, Derek, "a lovely man," "decent and reliable and normal" – which is Beth-speak for "safer and stupider and less." Derek, whom Beth is trying not very valiantly and in any case vainly to love, is a patsy and an arse, and that's really all you need to know about him.

They are barely on board when they are accosted by a well-dressed stranger with an apparent fixation on numbers – a showman, a nut? Neither, it turns out: He is Arthur Lockwood, medium, and he and Beth go way, way, back.

Tall and thin and dapper, ferociously reserved, Arthur is the Gatsby of the spirit circuit, "an adult specialist in hurt," a courier from the dead who brings messages to help ease the pain of those left behind. He's a con man, of course, but so gentlemanly, so winning, so well-meaning and so very much in love. … He is, in fact, beautiful in the vulnerability of his need. What he needs, we learn, is Beth: Why he doesn't have her, where she went and why, it takes 373 pages of tortuous back-and-forthing to uncover. There are code numbers to help us along, however, so that when, for instance, Beth says she has "888 reasons for being tired," you can flip to the handy little legend on Page 213 to learn that 8 means "accident" – if you can be bothered to do so.

Kennedy, besides being a short-story writer and a six-time novelist (her last, Day, won Britain's Costa Award, formerly called the Whitbread, in 2007), blogs for The Guardian. Her blogs are straightforward and interesting and very much matter-of-fact, not in the least fey, or cute, or whimsical; the contrast to The Blue Book is so striking I'm tempted to ask, what happened? Between THE CAPITAL LETTERS and the italics and the bold italics and the flashbacks and the gimcracks and the page numbers in code. The patience of Job, as I say, and the curiosity of a cat.

The Blue Book is less a novel than a game, a puzzle, a riddle, a trick; whatever you call it, it's a shame, because behind this display of relentless intellectual legerdemain is a moving story, worth reading.

Kathleen Byrne is a Toronto writer and editor who frequently reviews for Globe Books. 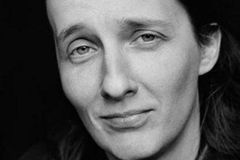