Closely chaperoned Bharati Mukherjee, 23, had never been alone in the same room with a man when she met Clark Blaise at the University of Iowa near the unanticipated end of the Kennedy presidency. Two weeks later, the two young writers were married.

Almost 48 years after that, following dual careers in which the couple have published almost 30 books between them, two of them co-written and the latest two so intertwined they actually share some characters, the authors sit together in Toronto for their first-ever joint interview.

The occasion marks the launch of Blaise's The Meagre Tarmac, a suite of linked stories about successful Indian immigrants to North America, told in their own voices, as well as the recent appearance of Mukherjee's Miss New India, a novel chronicling the adventures of a provincial girl in the now-booming home country. More symbolically, it signals the couple's ultimate reconciliation with a country they left in anger 30 years ago.

Calcutta-born Mukherjee and North-Dakota-born Blaise (his parents were Canadian) became immigrants together when they moved to Montreal in the early 1960s and he took a post teaching creative writing at Sir George Williams (now Concordia) University. He moved immediately to the forefront of the new Canadian writing. "Peggy Atwood, Alice Munro, Hugh Hood, Michael Ondaatje - these are all old friends from my early 20s," Blaise says. Both became Canadians, eventually drifting on the tides of history down the 401 to Toronto.

By then, they were happily ensconced in good academic jobs, with literary careers that included one co-written bestseller ( Days and Nights in Calcutta). But Mukherjee grew increasingly infuriated by the casual racism she encountered in 1970s Toronto and insisted they leave the country for an unsettled life of mainly temporary jobs in the United States - leaving behind her a blistering j'accuse in Saturday Night magazine.

"It was because I hadn't yet accepted - and still haven't accepted - social demotion as a consequence of immigration," says Mukherjee, an effortlessly aristocratic woman, born a Brahmin and raised amid wealth. "For me, the demotion was so steep. And I had the guts to say, 'I think this is wrong and I'm going to say it as loudly as I can.' "

"It was tough," adds Blaise, at 71, just a few months older than his wife, but battered where she is elegant, with a scab near one eye marking a recent fall, wires in his mouth holding together a jaw broken in an earlier fall, and an Order of Canada pin on the lapel of a commensurately battered blue blazer.

That has changed, they both add, but the wounds remain. The couple moved constantly in the States, "piecing together a little necklace of jobs," according to Blaise, rarely living together in the same city as they brought up two sons and struggled to re-establish the stability they had surrendered by leaving Toronto.

But the winding journey they never planned has helped to put them both in the forefront of a literary movement neither of them anticipated. Fulsomely praised in the U.S. press, Mukherjee is both a leading practitioner and critic of the new immigrant fiction that is changing the very definition of English literature.

Blaise is less prominent - "the greatest living Canadian writer most Canadians have never heard of," according to Quill & Quire, the book trade magazine - and published by a small Canadian press. But in its modest way, The Meagre Tarmac digs deeper than ever into the cross-cultural loam that has been so fruitful for his wife.

Even a decade ago, vigilant theorists of "post-colonial" literature would have denounced any white male with the temerity to "appropriate" the voices of characters with darker skin colours, but The Meagre Tarmac is unrepentantly their story - specifically, the generation of highly motivated professionals who poured out of a then-stagnant India in the 1970s and transformed North American life.

Typical of Blaise's characters is a Silicon Valley millionaire who describes himself as "a very lonely, very rich, very guilty immigrant," with feet so badly burned he can barely walk, brooding in his San Francisco penthouse as his gay son conducts a photographic tour of the sexual demi-monde of the ancestral homeland. Both characters reappear under different names in Miss New India.

Mukherjee defends her husband's "appropriation" with a scathing attack on "post-colonial academics" who invented the taboos for "careerist reasons."

"That kind of question about voice appropriation is antithetical to people who are dealing with imaginative works," she says.

"She called them assassins of the imagination," he says.

"In public," she adds. "But post-colonial theory is very much decayed. It's all dead now."

After 48 years of immersion in the Indian diaspora, Blaise was primed to learn its lessons. "I did the New York Times review in 1981 of [Salman Rushdie's] Midnight's Children, and it struck me then I was dealing with something that was new and unique in the history of literature," he says.

"A kind of confidence and energy that hadn't been there in the earlier generation of post-colonial literature," she adds.

"When they felt they had to almost apologetically ask for a place at the table," he continues. "This guy was clearing the table with the back of his hand."

"The immigrant writers right now have a tremendous energy and raw passion that I'm not seeing in European or North American writing," she adds.

Perhaps given his own homegrown status, Blaise hesitates to agree with that. But he does make it the ruling belief of one of his most sympathetic characters, a female Goan-American book editor who builds an illustrious career publishing authors from the former Third World in New York - only to be driven home by the commercial inanity of contemporary publishing.

As remote as it may seem, Blaise's identification with Connie de Cunha grows out of an immigrant experience as complex and ambiguous as any he invents. Before his fateful meeting with Mukherjee in Iowa City a half-century ago, Blaise saw himself as "a southern kid who was going to be the embodiment of Faulkner if I was going to be anything." Despite having not lived in Canada for decades, he is now happy to be known as a Canadian writer. "It seems to me psychologically I'm a Canadian," he says. But to be known today as a literary champion of the Indian diaspora still amazes him..

"You marry a culture," Mukherjee explains.

"You marry a family, you marry a culture," he adds.

And if you stay together long enough while allowing every other loyalty to slip and blur, you might just end up on the leading edge of world literature.

Opinion
Why Canada chose to unremember Air India and disown its victims
February 24, 2018
The girl with the Swedish apartment too
April 30, 2018 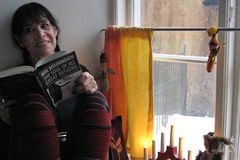