An anonymous e-mail outlining allegations of sexual impropriety has shaken one of the most storied independent book publishers in the country.

Coach House Books editorial director Alana Wilcox received a message on Jan. 13, a Saturday, signed by "The CanLit Janitors Collective," alleging abuse of power and sexual impropriety and other inappropriate behaviour on the part of Jeramy Dodds, a member of the poetry board.

The letter alleged that Mr. Dodds "used his position and stature at Coach House and the CanLit community at large in order to pursue inappropriate relationships with emerging women writers."

Ms. Wilcox replied on Sunday. "Thank you for bringing this to my attention. These allegations are shocking and I am taking them very seriously," her response read, in part.

The anonymous e-mail was obtained by The Globe and Mail through the sender – who has spoken to at least three women who had been connected to Mr. Dodds; the sender, who is not an alleged victim, has asked to remain anonymous.

Coach House announced on Jan. 16 that it had temporarily placed its poetry program on hiatus and will revisit the mandate, policies and procedures that guide its poetry list, but would continue to publish books already under contract.

The decision to suspend the poetry program was "philosophical" rather than economic, Ms. Wilcox told The Globe at the time.

"It's a challenging time in the poetry world and publishing poetry is always difficult and we just want to take a step back and consider how we do that and just think through our mandate, our procedures, our policies," she said.

Mr. Dodds's name and bio have since disappeared from the "about us" section of the Coach House website, where he was listed as a member of the poetry board.

Coach House, based in Toronto, is a tiny but venerable press, whose history dates back to 1965. It has published a who's who of Canadian literature, and played an important role in Canadian poetry.

It received the anonymous letter at a sensitive time in CanLit. The continuing Steven Galloway case at the University of British Columbia – in particular the UBC Accountable letter calling for due process for Mr. Galloway, who was fired as creative-writing program chair – has been deeply divisive in the community. Then this month, with the explosion of the #MeToo movement, the community was rocked once again by allegations of sexual impropriety at Concordia University's program, now under investigation.

In addition to his role on the board, Mr. Dodds is an editor and poet; his collection, Drakkar Noir, was published by Coach House in the fall. In 2009, he was shortlisted for the prestigious Griffin Poetry Prize.

The anonymous letter alleged that he "has used the promise of professional opportunities to pressure young women into engaging in sexual relationships with him, which, while seemingly consensual, involved gross power imbalances, abusive and manipulative behaviour in and out of the relationships, and often age differences of fifteen or more years."

The day after the e-mail was sent, Domenica Martinello, who has an upcoming poetry collection to be published by Coach House, received a call from Ms. Wilcox. She says information was disclosed in that conversation that she can't share for legal reasons, but she says she has a clear picture as to why the poetry program is on hiatus and that it has to do with allegations of sexual impropriety.

She made it clear that she is supportive of her publisher.

"I think Coach House is trying to be very pro-active in doing that and they have come to the decision that suspending the poetry program for now is the best way to stop and think about how best to move forward given the conversations that are happening right now," she said.

Ms. Martinello, now doing her MFA at the Iowa Writers' Workshop, does not know Mr. Dodds personally – other than through e-mail and by a phone call when he told her that her manuscript had been accepted by Coach House.

But The Globe has spoken with several female writers who had dated Mr. Dodds, who has also served as writer-in-residence at the University of Calgary and the University of New Brunswick. The women described him as using his cultural capital in the relationship; several said he talked about sending out their manuscripts. One woman said she felt a need to stay on his good side due to the influence he held, or she believed he held, on the writing scene.

One of the women received an e-mail from Mr. Dodds earlier this month apologizing for his behaviour during their relationship – which ended in 2014, she says – and offering to repay money that he has owed her. He later sent her an e-transfer for part of the sum.

None of the women agreed to be identified, saying they feared legal retaliation from Mr. Dodds as well as career or academic ramifications from his supporters.

The anonymous letter to Coach House requested Mr. Dodds's removal from his post as poetry editor and editorial-board member. It also asked that Coach House create a new or update its existing harassment policy and make it public.

An anti-harassment and discrimination policy was recently posted to the Coach House website. Ms. Wilcox wouldn't say when it was posted, but says the #MeToo movement made the organization realize they should have something in place.

The policy declares that Coach House is "committed to providing an environment free of discrimination and harassment, where all individuals are treated with respect and dignity, can contribute fully, and have equal opportunities."

The policy encourages anyone with a complaint against a Coach House author, staff of editors to contact Ms. Wilcox, and states that she is responsible "to act immediately on observations or allegations of harassment or discrimination."

Ms. Wilcox said she could not answer questions about whether the decision to put the Coach House poetry program on hiatus was related to allegations of sexual impropriety. She did not respond to follow-up e-mails on Wednesday by deadline, after an article about the matter was published on Buzzfeed.

Mr. Dodds did not respond to The Globe's inquiries by e-mail. 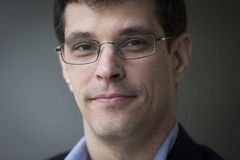