On Mother's Day three years ago, during a phone call between Vancouver and Ottawa, Anne Giardini pitched an idea to her son Nicholas Giardini. She proposed that the two of them collaborate on a book of writing advice by Anne's mother, Nick's grandmother, Carol Shields. As Nick recalls, his mother didn't even realize it was Mother's Day – but was simply missing her mother.

Shields, who died in 2003, was the Pulitzer Prize-winning author of novels that included The Stone Diaries, Larry's Party, Unless and The Republic of Love as well as short stories, plays, poetry and non-fiction.

She was an extraordinary writer who could do wonders with a sentence. (Is there a more compelling, staggering, exciting, perfect chapter in CanLit than the opening of The Stone Diaries?) For anyone missing the Shieldsean way with words, the product of that Mother's Day conversation is not merely instruction – but a gift.

Startle and Illuminate: Carol Shields on Writing is comprised of observations and advice drawn from essays, speeches, correspondence – even notes taken by creative writing students at the University of Manitoba – dug out of boxes and boxes at Library and Archives Canada in Ottawa by Nicholas and woven together by mother/daughter and son/grandson to create a highly readable collection.

Other than their introductions (and a foreword by Jane Urquhart), the words all come from Shields.

"I try to correct everybody and say it's Mom's book; it isn't mine," Anne says. "It's totally her."

The book takes its name from a line in a letter Shields wrote to a student in 1995 about poetry. She explained that Margaret Atwood had said she builds her poems around one line and the reader can often find it – "a line that uses words in a striking sequence, where the compression startles and illuminates."

Beyond the advice, the book is also, yes, illuminating in terms of Shields's process and even her life.

For instance, this sentence, which could have supplied a different title for the book, found in the chapter about pacing and tension: "I approached the typewriter each day with a combination of zeal and panic, and assumed, though I didn't articulate it, that something of that tension would spill onto the page," Shields wrote.

"I would have loved to have called this book Zeal and Panic," Anne says, laughing but serious. "Because frankly, no matter what you're writing, that's what you start with."

There are also some sharp observations about how women have been marginalized in literature (one male reviewer Shields references dismisses a work of fiction about motherhood as a "diaper novel"); advice on how to borrow overheard dialogue or details without losing friends (Shields was tempted by an acquaintance who matched her candles to her lingerie, but ultimately decided not to use the detail for fear of upsetting the woman); and family fun facts: I knew Shields was born in Oak Park, Ill., but had not known that her mother had roomed for a year at the Hemingway household while son Ernest was off in Paris writing The Sun Also Rises. ("He is a time waster," his father told Shields's mother.)

I asked Anne – chancellor of Simon Fraser University, former Weyerhaeuser president and the author of two novels – whether there was anything in the book that surprised her.

"On every page, yes. I opened it and found the sharpest of insights," she says. "There's a wonderful turn of phrase on almost every page and things I didn't hear her say or read before or wasn't aware of or hadn't thought of for years, so yes, I think I was startled as much as anybody."

So she tried it while we talked; opened the book at random and indeed found another keeper.

"Those who have chosen a writing life have already surrendered a portion of their DNA," she reads. "I mean, who says that? My mother." She pauses. "So that's the hard part, and here I'm a bit on the verge of tears because it's hard not to have her any more."

The project has been emotional for Anne. Shields did not live long enough to see her oldest daughter publish a novel, but they did collaborate on a short story, A Wood, passing the pages back and forth, following ground rules they established as they set out. And Shields always encouraged input from family members in her writing. (Anne's husband, an accountant, discerned that Shields had miscounted the number of people attending the dinner in Larry's Party, for instance.)

"She was just so unshielded about both her writing and her writing process. She was so open and inviting, generous," says Anne.

For Nicholas, who was 11 when Shields died, this research project – conducted over an Ottawa summer after he completed university studies – offered new insight into not just her talent but her character.

"I didn't know what to expect and I was surprised for the most part not about all the writing advice, but about how much personal information I found," he says. "And it really helped me gain a more three-dimensional idea of who my grandmother was."

One piece of advice Nicholas took directly from the files and applied to this book was Shields's suggestion that an author tell a story as if he or she was whispering it into the ear of a close friend or loved one. "That made it a lot easier for me to figure out what the message I was trying to get across was," he says.

It's the same instruction Anne identifies as the best piece of direct advice she received from her mother.

Anne is still writing fiction. She recently completed her third novel – and shelved it. "I wanted to write a light book about death and I wrote a heavy book about death," she explains. "I went back and tried to make it lighter and I discovered you can't change a brick into a loaf of bread by injecting air into it; it's still a brick." (Can you tell she's Shields's daughter?)

So Anne is beginning her second third novel – and this time she is applying the writing plan her mother laid out, found in Startle and Illuminate: write two pages every day, and begin the next day by rereading the previous day's pages to enter the other reality. She began on publication day, April 30, and is encouraging others to join and follow the Carol Shields plan – and have their own novel written by April 29, 2017.

Perhaps you are not a writer, but a reader who misses the mastery of Shields's prose, the excitement of reading new ("new") words of hers. This book is for you too, Anne says – a refreshing contrast to children of artists who prefer to distance themselves from the work of the famous parent.

"This is [for] anyone who loved reading my mother, because she hasn't had a book out lately, as they say. So it's a little bit more of her. And I have certainly felt … a thirst and a hunger for a little more Carol Shields. So even if someone doesn't intend to write a word or never gets around to it, this is more Carol Shields – and that's bound to be a good thing."

Daughter of Carol Shields reflects on her own literary awakening
February 13, 2015 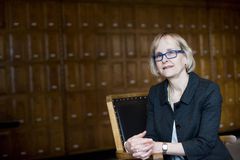