When David Carr wrote about the Brian Williams saga earlier this week, he was characteristically tough, but even more characteristically compassionate. The New York Times media critic chided the NBC anchor, who was publicly roasted for embellishing a war story, over his "weak" apology.

At the same time, Mr. Carr, unlike many of his more bloodthirsty colleagues, didn't think Mr. Williams should be fired. He hadn't failed at the fundamental principles of his job. More than that, Mr. Carr wrote in a second piece a few days later, he profoundly believed that everyone deserves a second chance.

Isn't it odd that this sentiment seems so radical at the moment: Everyone deserves a second chance. Everyone makes mistakes, but does not deserve to be immolated over them. Mr. Carr – the late Mr. Carr, and how painful it is to write that – understood that better than anyone. He burned more bridges than Genghis Khan, and did more drugs than Keith Richards (although that may not be physically possible), but in the end rose to a position of influence and respect at the New York Times. He was there because so many people gave him another chance.

There was likely no more beloved figure in contemporary journalism, and his sudden death on Thursday evening was followed by a rush of public grief from friends, colleagues and readers. "A preposterously excellent human being," wrote the novelist and editor Kurt Andersen, who was one of the people who took a chance on Mr. Carr and gave him a job after he'd flamed out and nearly ruined his life.

Mr. Carr's death came at the end of a very bad week for our craft. In the U.S., the Williams scandal was followed by the car-accident death of veteran reporter Bob Simon. In Canada, we lost the pioneering sports writer Alison Gordon. Then Sun News Network shut down and – no matter what you think of that outfit – put at least 150 people out of work. It is sometimes hard, if you're a journalist, not to imagine you're looking out a plane window and seeing both wings on fire.

It was Mr. Carr's job, as media critic, to look at those fires and determine whether they could be put out or whether a rescue helicopter was going to come along. He was exceptionally good at making sense of the heaving and buckling media landscape, and he did it with a cub reporter's enthusiasm and Ring Lardner's vocabulary (people were "good eggs" and journalism was "a grand caper.")

What I loved most about his writing, and what I fear is irrevocably lost, is his embrace of the flawed and the cracked, nuance and complexity over the rush to judgment. We live in a moment where spittle-flecked self-righteousness is a default setting, and any public figure who makes a mistake – no matter how innocuous or unintentional – must lose their jobs. "Have them fired" is the "off with their heads" of the day, and the tumbrels lead to the unemployment office instead of the guillotine. Whether it's Brian Williams or Amanda Lang or the guy who adjusts the camera at Sun News, there's a feral desire to punish anyone who's transgressed some impossibly pristine code of behaviour.

Mr. Carr had more empathy for human frailty, more compassion for the weirdo and screw-up because he was one himself, as he outlined in his staggering memoir, The Night of the Gun. It's a crazy good book, a meditation on the trickiness of memory that is both self-lacerating and self-regarding, as it reveals the person Mr. Carr was for more than 10 years (rhymes with "basshole.") He was a talented reporter who was also a cokehead who dealt drugs, cheated, repeatedly let down his colleagues, physically abused his partner, and once left his twin baby daughters outside in a cold car while he went to buy crack. Does a person like him deserve to be redeemed? That's the question, isn't it? A question we now answer with a two-letter word, which then leaves 138 characters for a clever joke.

But a succession of people did take a chance on Mr. Carr – wearily, warily – once he'd cleaned up. He writes, "When I set about climbing out of the ditch I had sailed into, I viewed any assignment as a terrible kindness, a selfless act on the part of some editor who did it instead of giving to the March of Dimes."

As he continued his rehabilitation, he passed that compassion on. When he discovered the network of lies perpetrated by his colleague at the New York Times, Jayson Blair, he didn't turn on the friend who betrayed him, but instead sought to help the fellow addict who might return to drugs in despair: "I know that you were not honest with me," Mr. Carr told Mr. Blair, "and a time will come when we will sort that all out, but I just don't want you to do something stupid."

That's a voice I wish we still had in the world. Mr. Carr collapsed in the newsroom and died at age 58. He had lived a lot, but not long enough. 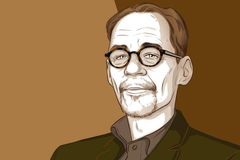 Opinion
Mockingbird’s sequel is a golden egg for a desperate publishing industry
May 12, 2018