I learned this two years ago when I told a girlfriend I was pregnant, and she joked, "Well I guess he won't be a professional hockey player, will he?" That was because my baby was due in August, which, according to Gladwell's 2008 book Outliers, might well ensure his NHL career was over before it had begun. In Outliers, Gladwell demonstrated that a high percentage of NHL players was born in January and February – growing up, that made those kids the oldest and the biggest on hockey teams aggregated by birth years, giving them a competitive physical and intellectual advantage. For this reason, some parents hold their kids back a year from school, fearing they won't succeed. My kid, on the other hand, would enter school as one of the youngest in his class, which meant teachers would overlook him and bullies would lock him in the supply closet.

A few days later it occurred to me that maybe Gladwell's conclusion didn't necessarily mean destiny. After all, both my partner and I were late-in-the-year babies. We both entered school among the youngest in our classes. We both graduated with honours, were reasonably athletic and won scholarships to university. Also, I knew many people born late in the year who'd played competitive sports and had excellent careers. Sidney Crosby was an August baby, after all.

Now I'm no social scientist, but it dawned on me that something very creepy was going on. Many of us had accepted as a general rule (albeit somewhat jokingly) something that didn't seem to have grounding in anecdotal reality. This, to use a Gladwellian term, is clear proof of the "Stickiness Factor" of the author's ideas, but not necessarily of their absolute truth.

Gladwell has encountered much harsher and better-researched criticism from scientists and academics (most notably Steven Pinker's negative review of his book What The Dog Saw in The New York Times in 2009). But with the publication of his new book, David and Goliath: Underdogs, Misfits and the Art of Battling Giants, the criticisms have become much louder, more prevalent and impossible to ignore.

In his recent review for The Wall Street Journal and subsequent follow-up piece in Slate, the U.S. psychology professor Chris Chabris makes a controlled and eloquent argument for why many of Gladwell's most famous conclusions are doubtful, if not entirely spurious. He accuses The New Yorker writer of "telling just-so stories and cherry-picking science to back them up," and "presenting as proven laws what are just intriguing possibilities and musings about human behaviour." In last week's New Statesman, Steven Poole accused Gladwell of "pseudo profundity," and the Guardian even ran a biting satire of the book in the author's own voice in its "Digested read" column.

Gladwell has responded intelligently to his critics both in print and in interviews, but as a lay reader, I think the blowback is worth noting. It's also advisable to view his critics with a certain amount of skepticism: Though fascinating, their obsessive debunking carries a strong whiff of envy.

In David and Goliath, Gladwell takes as his premise the very pleasing notion that the underdog is inherently stronger than his monolithic adversary. For the big and strong, he writes, "the same qualities that appear to give them strength are often the sources of great weakness," whereas for the tiny and weak, "the act of facing overwhelming odds produces greatness and beauty."

As with most of Gladwell's books, he had me at hello – the initial thesis is simply irresistible. After all, who doesn't want to believe that small things make a huge difference (The Tipping Point), that simple, gut decisions are better than agonizing drawn out ones (Blink), that professional success is mostly about hard work (Outliers) or that gorgeous, rich, powerful people are actually functioning at a serious disadvantage to my messy, non-powerful, non-rich self?

But this attraction to the narrative, say Gladwell's critics, is both his commercial genius and his flaw as a thinker. In essence, they accuse him of compiling research that supports his feel-good stories and conveniently ignoring any that doesn't. Poole goes even further, accusing him of "telling his readers that everything they thought they knew about a subject is wrong, and then delivering what is presented as a counterintuitive discovery but is actually a bromide of familiar clichés."

The section in David and Goliath many are taking issue with is the one on dyslexia, which Gladwell recasts as a "desirable disadvantage," asking the reader, "You wouldn't wish dyslexia on your child, or would you?" Holding up the examples of several wildly successful people who have the condition, Gladwell concludes that it was an early inability to read that gave them the focus and diligence to succeed in life. It's a lovely thought, but a dangerous one too. If unproven ideas like "dyslexia is actually an advantage!" take hold in our culture, what will it mean for people who suffer from the condition?

While it's true that in rare occurrences poverty, tragedy or disability can spur people to greater success, it's important to remember these stories are the exceptions to the rule – rather than the rule itself. Disadvantages, for most people born to them, are simply disadvantages.

The idea that people beset by difficult circumstances should be deemed lucky or enviable seems bizarre. But hey, this is Malcolm Gladwell we're talking about – the Goliath of contemporary non-fiction. In the meantime, I'm still holding out hope of becoming an obnoxious hockey mom. 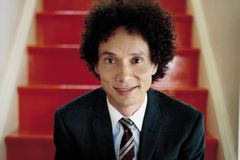