People who are really good at conjuring funny emojis from your phone's character sets – hilarious ones like anchors and bikinis and mugs of beer and whatever that square and cloud are (sunset? dishwasher?) – or well-meaning internationalist ones like lady-in-headscarf or non-caricatural-Asian-man – you do realize that half of the time they don't come up on anyone's screen as anything but a series of squares, right? So we all have to intuit how they are relevant to whatever you are trying to comment on.

It's a kind of communication parlour game, like charades, in which the recipient of a message has the message hidden from her and must try to guess at it through clues given by the sender, such as the sender's previously stated political views and current difficulties in life. You'd think that this would be considered an exceedingly inefficient means of communication, especially when actual language would make things so much clearer and simpler.

However, it turns out this parlour game is surprisingly easy to play. Even when we are sent a series of blank squares as a message, the meaning of that message is invariably clear. We are never in doubt as to the emotion expressed by blank squares.

For example, you've just had a baby, so you post the news on the social medium of your choice. Your close friend is the first to respond, with the emotional message "square, square, square, square!" It doesn't take much lexicographical divining to interpret the message as one of unconditional enthusiasm and support. She probably carefully selected some clever emojis – a heart, a lightning bolt and the pile of poop that Canadians are supposedly so fond of (first in the world in poop emoji usage, according to a recent important study) – but that was a waste of time. Or it wasn't, really, because the squares alone do the trick.

Similarly, the friend who comments on a report of an Islamist atrocity with a row of squares followed by an exclamation mark is clearly expressing anger and disapproval, even though the squares are identical – and indeed, even if they were correctly represented might turn out to contain the same lightning bolt that the happy-baby friend used. All we need is context and any inarticulate expression reveals its meaning. The corollary of this is that the lightning bolt on its own is completely empty of meaning. Even its connotation is fluid.

Even if the character is correctly displayed on my screen, I may not be able to guess what it represents: The thumbs-up drawing might look like a cloud of rain or a map of a difficult racetrack if you didn't know what you were looking for. But that doesn't matter; I know you mean well whatever the squidgy block is.

So it turns out a meaning container – a vessel for meaning, like a blank card inside an envelope – is just as useful as the message itself; the container is the message.

But this makes one wonder, doesn't it, about why we need so many emojis in the first place? They express exactly as much as a "like" button. And that wondering may provoke further wondering about why we need so many variants of like and dislike in Internet language at all: We could simplify all our digital communications by reducing our exchanges to a set of pre-sets. Good/plusgood/doubleplusgood would be adequate.

Actually meaningless expressions, or expressions that only serve to establish contact, have always had a role in language and social interaction. "Hi, how are you?" is not a real solicitation for news. The phrase doesn't have meaning per se; its value is as a sign of friendly greeting, rather like a handshake. As language it is pretty much empty.

First-year linguistics students have to memorize Roman Jakobson's six functions of language, a set of categories for different types of utterances. This list has been taught since the 1960s and has not been superseded. It includes several functions that are not meant to convey information. The meaningless contact phrase, such as "How do you do," is an example of the "phatic" function: words that establish that the channel of communication is open, or language for the sake of interaction. A puzzling but beautiful phrase – "I sang in my chains like the sea" – is an example of the "poetic" function; it also doesn't convey information per se but calls attention to the code being used. But emojis don't fit into any of these categories because they are not language. If they were words they might fit into Jakobson's "emotive" function, that set which includes interjections such as "Holy crap!" An emoji is kind of like an interjection – which is why random typographical symbols have long been used by cartoonists to signal swearing. But emojis are still not language. They are not even ideograms such as are used in Chinese writing, because they don't have specific, widely used meanings (see the lightning-bolt question, above).

And the sending of empty meaning-vessels – the series of squares that I sometimes get instead of texts on my phone – well, that is surely a new linguistic phenomenon. I don't even know if it is linguistic – it's semiotic, sure, but not linguistic. It's an amazing new code that can function as communication without any meaning content whatsoever. It is a non-sign language. That's how advanced our screen-adept brains have become: We can receive a signified without a signifier. 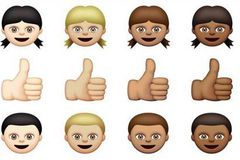