As summer ends, Globe Books brings you an advance look at some of the fall's biggest Canadian novels. This week, we present a passage from The Orenda, by Joseph Boyden.

Set in the fledgling New World of the mid-1600s, the place the original people call Turtle Island, The Orenda is a visceral portrait of life at a crossroads. Worlds collide in a story of blood and hope, suspicion and trust, hatred and love that comes to a head as the Jesuits and Huron join forces to face the Iroquois in a battle for the soul and soil of a new nation. In this passage, Christophe, a missionary travelling with Hurons, intending to convert them, contends with a new addition to their group.

We had magic before the crows came. Before the rise of the great villages they so roughly carved on the shores of our inland sea and named with words plucked from our tongues – Chicago, Toronto, Milwaukee, Ottawa – we had our own great villages on these same shores. And we understood our magic. We understood what the orenda implied.

But who is at fault when that recedes? It's tempting to place blame, though loss should never be weighed in this manner. Who, then, to blame for what we now witness, our children cutting their bodies to pieces or strangling themselves in the dark recesses of their homes or gulping your stinking drink until their bodies fail? But we get ahead of ourselves. This, on the surface, is the story of our past.

Once those crows flew over the great water from their old world to perch tired and frightened in the branches of ours, they saw that we had the orenda. We believed. Oh, did we believe. This is why the crows, at first, thought of us as little more than animals. We lived in a physical world that frightened them and hunted beasts they'd only had nightmares of, and we consumed the mystery that the crows were bred to fear. We breathed what they feared. But they watched intently, as crows are prone to do.

And when they cawed that our magic was unclean, we laughed, took a little offence, even killed a few of them and pulled their feathers for our hair. We lived on. But that word, unclean, that word, somehow, like an illness, like its own magic, it began to grow. Very few of us saw that coming. So maybe this is the story of those few.

I awake. A few minutes, maybe, of troubled sleep. My teeth chatter so violently I can taste I've bitten my swollen tongue. Spitting red into the snow, I try to rise but my body's seized. The oldest Huron, their leader, who kept us walking all night around the big lake rather than across it because of some ridiculous dream, stands above me with a thorn club. The weight these men give their dreams will be the end of them.

Although I still know little of their language, I understand the words he whispers and force myself to roll over when the club swings toward me. The thorns bite into my back and the bile of curses that pour from my mouth make the Hurons convulse with laughter. I am sorry, Lord, to use Your name in vain.

They'd all be screaming with glee, pointing and holding their bellies, if we weren't being hunted. With a low sun rising and the air so cold, noise travels. They are clearly fed up with the young Iroquois girl who never stopped whimpering the entire night. Her face is swollen and, when I see her lying in the snow, I fear they killed her while I slept.

Not long ago, just before first light, we'd all paused to rest, the leader and his handful of hunters stopping as if they'd planned this in advance, the pack of them collapsing against one another for the heat. They whispered among themselves, and a couple glanced over at me. Although I couldn't decipher their rushed speech, I sensed they talked of leaving me here, probably with the girl, who at that moment sat with her back to a birch, staring as if in a dream. Or maybe they talked of killing us. We had slowed them down all night, and despite trying to walk quietly I'd stumbled in the dark through the thick brush and tripped over fallen trees buried in the snow. At one point I removed my snowshoes because they were so clumsy, but then sank up to my hips in the next steps, and one of the hunters had to pull me out, biting me hard on the face once he'd accomplished the deed.

Now the snow covering the lake glows the colour of a robin's egg as sunlight tries to break through cloud. If I live through this day I will always remember to pay attention to the tickle of dryness at the back of my throat at this moment, the feeling of a bad headache coming. I've just begun to walk to the girl to offer her comfort, if she's still alive, when a dog's howl breaks the silence, its excitement in picking up our scent making me want to throw up. Other dogs answer it. I forget how my toes have begun to blacken, that I've lost so much weight I can barely support my gaunt frame, that my chest has filled with a sickness that's turned my skin yellow.

I know dogs, though. As in my old world, they are one of the few things in this new one that bring me comfort. And this pack's still a long way away, their voices travelling easy in the frozen air. When I bend to help the girl up, I see the others have already disappeared into the shadows of trees and thick brush.

My terror of being left behind for those chasing me, who will make sure my death is slow and painful, is so powerful that I now weigh taking my own life. I know exactly what I must do. Asking Your divine mercy for this, I will strip naked and walk out onto the lake. I calculate how long all this will take. It's my second winter in the new world, after all, and my first one I witnessed the brutality of death by freezing. The first ten minutes, as the pack races closer and closer, will certainly be the most excruciating. My skin will at first feel as if it's on fire, like I'm being boiled in a pot. Only one thing is more painful than these early minutes of freezing, and it's the thawing out, every tendril of the body screaming for the agony to stop. But I won't have to worry about that. I will lie on the frozen lake and allow the boiling cold to consume me. After that handful of minutes the violent shaking won't even be noticed, but the sharp stabs of pain in the forehead will come, and they will travel deeper until it feels my brain is being prodded with fish spines. And when the dogs are within a few minutes of reaching me, I will suddenly begin to feel a warmth creeping. My body will continue its hard seizures, but my toes and fingers and testicles will stop burning. I will begin to feel a sense of, if not comfort, then relief, and my breathing will be very difficult and this will cause panic but that will slowly harden to resolve. And when the dogs are on the lake and racing toward me, jaws foaming and teeth bared, I will know that even this won't hurt anymore, my eyes frozen shut as I slip into a sleep that no one can awaken from. As the dogs circle me I will try to smile at them, baring my own teeth, too, and when they begin to eat me I won't feel myself being consumed but will, like You, Christ, give my body so that others might live.

This thought of giving, I now see, lifts me just enough to pick up the girl and begin walking away from the lake's edge. After all, if she's alive, won't her people – my pursuers – consider sparing me? I will keep her alive, not only because this is what You demand but also to save myself. The thought of betraying Your wishes feels more an intellectual quandary than what I imagine should physically cause my heart to ache, but I'll worry about that later. For now I follow the others' footsteps as best I can, my thick black robe catching on the branches and nettles, the bush so thick I wonder how it is that the men I follow, and those who follow me, are not part animal, contain some black magic that gives them abilities beyond what is natural.

You seem very far away here in this cold hell, and the Superior's attempts to prepare me before I left France, before my journey to this new world, seem ridiculous in their naïveté. You will face great danger. You will most certainly face death. You will question Jesus' mercy, even His existence. This is Lucifer whispering in your ear. Lucifer's fires are ice. There is no warming your body and your soul by them. But Superior doesn't have any idea what true cold is, I realize, as I allow myself and the girl to be swallowed by the darkness of trees that the bitter sun fails to penetrate.

Excerpted from The Orenda. Copyright © 2013 Joseph Boyden. Published by Hamish Hamilton. Reproduced by arrangement with the Publisher. All rights reserved. Read more from The Orenda at hamishhamilton.ca/upfronts.

Excerpt: A sneak peek at Wayne Johnston’s The Son of a Certain Woman
August 26, 2013 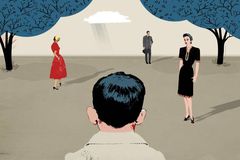 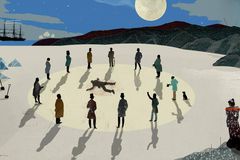