Anna Porter
STOCKHOLM
Special to The Globe and Mail
Published October 1, 2010 Updated May 1, 2018

Right from the arrivals level of Stockholm's Arlanda airport, the visitors' desk offers to sell you maps of Stieg Larsson Walks. His fans come from all over - Germans, Dutch, Spaniards, French, Americans, Canadians, Japanese - even in minus-18 weather, when they have to don special boots to walk the icy sidewalks. (Swedes don't use salt.)

The frenzy is no surprise: At last estimate, there were 45 million readers of Larson's Millennium novels, which have also been made into two hit movies, with a third, starring Daniel Craig and Christopher Plummer, in the works. In the wake of Larsson's sudden death from a heart attack in 2004, his father and brother have raked in an eye-popping $40-million from the rights to the author's trilogy.

Publishers, movie studios, blood relatives: Larsson left behind a financial bonanza - for everyone except the woman who shared his life for 32 years. Her name is Eva Gabrielsson. And, as if inspired by Lisbeth Salander, the fearless heroine of Larsson's darkly turbulent novels, she has been fighting an intrepid battle to secure what she sees as a stolen inheritance and to establish herself as more than just a bit player in the evolution of Larsson's fiction.

Her obstacles have been many (for one, Larsson left no will naming her as his heir). Her critics (some of whom question the depth of her role in Larsson's creative process) have been less than generous. But recently, after years of playing her cards close to her chest, and giving only brief - and rare - interviews, Gabrielsson agreed to sit down with The Globe and Mail for a revealing face-to-face chat.

I meet her on neutral ground: a room in the International Press Centre in downtown Stockholm. Leather chairs, hardwood floor, low coffee table but no coffee. Uncharacteristic for a Swedish press club - Gabrielsson, as did Larsson, (as does Blomqvist) loves coffee - the centre's coffee machine is broken.

It's a cold, blustery day in Stockholm, but it is warm inside. A soft-spoken woman of around 50, she has dark blond hair and warm brown eyes. She speaks very correct English with a mild Swedish accent and British upper-class overtones. Gabrielsson's beige raincoat, its belt tightened, stays wrapped around her during our long conversation. She does not allow people into the apartment she used to share with Larsson, nor had she wished to meet near her workplace. She's an architect with a challenging job in the city and she does not want that part of her life interrupted by the part that has to do with "the books."

Gabrielsson says she has more than 30 years of practice being on guard. Larsson (whom she met at a demonstration against the Vietnam War in 1972) was an investigative journalist with a natural tendency to get under the skin of those he investigated: neo-Nazis with big-business connections - not unlike those featured in The Girl with the Dragon Tattoo. He had been threatened. Skinheads haunted the sidewalks outside his office, and at least one of his acquaintances was murdered.

Larsson and Gabrielsson were cautious - the only name on their apartment was always hers - but undaunted by the danger. Larsson's latest posthumously published work is a handbook for journalists on dangerous assignments.

Gabrielsson, too, has just published a book. Hers is about the arcane Swedish law that does not recognize common-law marriage - thus legally negating the decades they had been together. As for a will: He was 50; he was not supposed to die so young.

The first books in a series of 10 that Larsson had planned - with Gabrielsson at his side - were just getting ready to be published when he had his heart attack. The first three, they hoped, would finally give them the means to live a little better, to spend more on themselves, take holidays, enjoy their time together.

How could they be so sure the books would be successful? The advance was beyond their expectations; the first meetings at their Swedish publisher, Norstedts, were promising. And, as Larsson's editor, Eva Gedin, told me, the author knew a great deal about police procedurals, mysteries, crime stories. He had been writing about the best crime novels for years, and he knew what made them succeed. "But he wanted to do something different, something no one else had ever done before," Gedin says.

It was Gedin who first determined that the big plastic bag that Larsson (she had never heard of him before) had delivered to her building contained two potential bestsellers. "We offered him the biggest advance we had ever offered a first-time writer," she says. Gedin's brightly lit office now displays a wall full of Larsson books.

Of course, what no one could anticipate was Larsson's death before those same books rose to international fame. Gabrielsson was still in shock after Larsson's sudden death when she discovered that not even the apartment they shared would be fully hers. Erland and Joakim Larsson, Stieg's father and brother, now owned his half of the place as well as all the income from the books.

"It is as if my identity has been erased. It's like being dispossessed," she says. "The Swedish laws are based on medieval German laws. It is all about protecting the bloodlines."

Gabrielsson's book also catalogues the tales of several other women who discovered the same piece of legislation too late. "There are not statistics on how many women have been affected. Most of the survivors just live in silent misery." As for her case: "I do not even have the right to go to court and debate the issue. All I can do is try to negotiate with the Larssons."

This she has tried to do through her lawyer, but to virtually no effect. All the Larssons conceded after years of negotiations was that she could have Stieg Larsson's half of their shared home. Recent stories about a major financial offer - almost $3-million - have been without basis. The first Gabrielsson knew of the offer was from the newspapers. Media releases saying the Larssons offered her a major say in how the manuscripts were to be "exploited" were also illusory. "The way the trust is set up, I would have had no real rights."

At first Gabrielsson hoped the Larssons would be fair. "I stayed silent for three years," she says. "When the books were first published, I even gave a few helpful interviews." Now, she is fighting back. "The books, as Stieg saw them, were to be about women who are abused and used, but eventually they fight back."

Gabrielsson is not happy with the renaming of the books for their English-language editions - The Girl with the Dragon Tattoo, for instance, was titled The Men Who Hate Women in Swedish. Nor is she pleased with the way the English dialogue reads.

Other books on Larsson have also left her cold. The latest entry, by Kurdo Baksi, suggests his "friend Stieg" was a bad writer and made some of his investigative stories up. "If Stieg were alive, he would sue," she says, "but I have no rights to sue."

Then she adds, "Why attack a dead man?" For the first time since we started to talk, her voice breaks.

Still, Gabrielsson hasn't given up the fight, or on finding a way to change the laws. (There is a website, supporteva.com, collecting funds for her mounting legal fees.) And she will publish another, more personal, book in 2011. In it, she writes about her life with Stieg and after Stieg. "The new book will first be published in French," she tells me.

She is not yet ready to give out other details about the publication. She has grown wary. There have been too many intrusions into her life. Now, she wishes to control what she offers to the outside world.

There have been numerous articles about a fourth book in the Millennium series: that more than 200 pages are finished and in Larsson's computer, which Gabrielsson has secreted away. Some have speculated that it's set in Canada; others, that it takes place in Italy. One French website claimed that it had seen the manuscript and was planning to post a chapter a week. None of this is true.

All Gabrielsson will say: Yes, Larsson had been working on the next book. But no, she does not intend to finish it for him; it would not be right. It would be even less right to sell it to the "rightful heirs" - as they have proposed - for an undisclosed sum, thus betraying the trust Larsson had placed in her, his wife and partner.

After our talk, Gabrielsson decides to show me the Wallenberg monument, a short walk from the Press Centre. It is a strange arrangement of metal sculptures leading to a railway line that ends at the great synagogue. She talks of the Holocaust as if it happened yesterday, as if the shame of not doing more to help would always haunt the Swedes, herself included.

Anna Porter is a former publisher, as well as the author of numerous books, including crime fiction, memoir and, most recently, a history on Central Europe called The Ghosts of Europe. 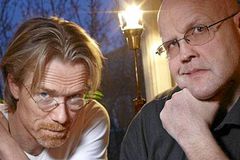 Why Lisbeth Salander is best kick-butt avenger ever
May 2, 2018 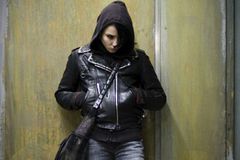 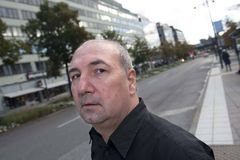