The difficulties in knowing what to get the man who has – or thinks he knows – everything on Father's Day highlights a growing cultural problem, namely the increasing male aversion to reading fiction. Recent market surveys consistently indicate that men make up only about 20 per cent of fiction buyers. And let's face it, this figure might be on the high side. The average fellow is more likely to voluntarily watch a season of Grey's Anatomy than read a novel.

So what's the problem? Why are men increasingly allergic to imagined literature? Is it that virtually all the book-related mega-phenomena of the past few years have been geared toward women (Fifty Shades smut-for-moms, the Twilight bloodsucker soap, the Hunger Games teen-romance version of Survivor)? Or are guys merely proving that while their lights may appear to be on, nobody very interesting is at home?

Based on my own unscientific survey, the No. 1 reason men avoid fiction is because they deem it to be useless. They'll read a billionaire's investment advice, scan Malcolm Gladwell to glean the one idea his book contains, pull quotable bits of wisdom from sports heroes' memoirs. But novels? What do they do?

In the name of reversing this disturbing trend of male fictional illiteracy, I here propose practical enticements for men to read books that happen to be composed of things that never actually happened.

Can You Man Up By Reading Fiction?

You could be forgiven the misapprehension that novels are exclusively for women if the last time you entered a bookstore was in the days preceding Mother's Day, or around the release of a Twilight movie, or in the lead-up to Christmas, or when Oprah was in charge of the universe, or, well, most any other time. But there really are Guy Novels out there. Try James Dickey's brutal masterpiece Deliverance, for example. Thrilling in its story, profound in its insight into maledom, this tale of urban buddies on a wilderness canoe trip is the novelistic equivalent of a defibrillator.

Many men have counted themselves out of the novel-reading game because of length (we're guys: we've been preoccupied with length since adolescence). A manly novella that's light on the page count but high on impact is Joseph Conrad's Heart of Darkness. African adventure, death, insanity – the masculine tasting menu is all here.

How Not to Get Stuck on All the Long Sentences

If the hurdle isn't the length of the book but its sentences, there's always the macho master of minimalism: Hemingway. The Complete Short Stories of Ernest Hemingway may be more than 600 pages, but the great thing about story collections is that nobody says you have to read them all. Like channel surfing? You can do the same thing with a book!

I Like Westerns. As in Movies. Do They Make Novels As Good as Unforgiven?

Better! Canadian Patrick deWitt's The Sisters Brothers is wildly engaging and funny as hell, and buying a copy has the added benefit of supporting the domestic economy.

The latter would also be true of purchasing Gil Adamson's excellent The Outlander or any of Guy Vanderhaeghe's sort-of trilogy about the overlooked Canadian wild west, The Englishman's Boy, The Last Crossing and A Good Man.

Also brilliant (though a true test for the squeamish) is Cormac McCarthy's anti-western, Blood Meridian. The story follows a teenage protagonist as he joins up with a nasty group of scalp hunters for hire on the U.S.-Mexico border in 1850, but it's really about what all of McCarthy is about: how America was born out of motiveless violence.

How Do I Become Better at Shooting the Breeze?

Anyone whose work requires some expertise in the matter of salesmanship (everyone, in other words) wishes they could be a more effortless raconteur. Few narrators offer better companionship on this count than Richard Ford's Everyman, Frank Bascombe. In the first novel in the Bascombe series, The Sportswriter, Frank is a divorced writer who is slumming it covering sports, enjoying the company of women and sharing his astute platitudes. In the Pulitzer-winning follow-up, Independence Day, the problems of aging and fatherhood rear their obligatory heads. But as with all Everymen, Frank is not necessarily as simple as he repeatedly claims.

But I Only Read the Sports Section

Novels do sports too!

For instance, the hands-down best contemporary behind-the-scenes sports novel (or sports novel of any kind) I've ever read is James Boice's MVP, which also happens to be the best novel I've ever read about the morally corrosive side effects of fame. It follows a lightly fictionalized basketball star's rise and fall and sociopathic rise (if you can't guess who it is by page 50, you're not watching enough ESPN).

What Novel Can Help Me Charm the Ladies?

That's not really what novels do, I'm afraid. While there are undoubtedly occasions when pretending to have read a literary masterwork has assisted in certain intimate campaigns, this is not recommended practice.

That said, Emily Brontë's Wuthering Heights may provide some tips on bringing out your inner, irresistible Heathcliff (stopping short of the measures he ultimately takes, of course). In any case, mastering the charms of a Byronic hero (or even gaining familiarity with the phrase) might well make for an enticing hook while working the speed-dating circuit.

If Mother's Day could unofficially be called Sacrifice Acknowledgment Day, Father's Day might as well go by the name of You'll Never Change Day. But gentlemen, that's not to say we should stop trying to give the right side of our craniums a workout now and then. Building yourself a manly man's mini-library could potentially prove two valuable points: Literature really is meant for everyone and you can actually find something useful in a book from the Literature section after all.

Andrew Pyper is the author of five novels, including Lost Girls, The Killing Circle and, most recently, The Guardians. His The Demonologist will be published early next year. 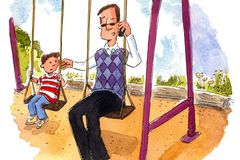 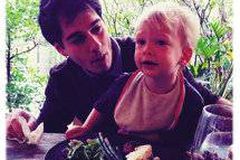