In any other author interview, the question falls as naturally as rain. But when the author is George R.R. Martin, who has sold 15 million copies of his epic fantasy series, A Song of Ice and Fire, only the brave dare ask when the next instalment of the multi-volume saga might appear.

Make no mistake: Martin is an unusually genial genius, beloved by the industry for the attention he devotes to his "fan base" - that sine qua non of modern book marketing, of which his has become one of the largest and most impressive in all of fandom. But ask him when the next book is coming out and the line from Santa Fe, N.M., where the rumpled 62-year-old author lives with his wife Parris, briefly goes dead.

To understand why is to enter one of the least likely quarters of modern fandom, an ominous region not unlike The Haunted Forest beyond The Shadow Tower of the Seven Kingdoms of Westeros, the medieval fantasy land where Martin's series plays out. The author discovered it by accident when he finished Book Four: A Feast for Crows, and, "in an excess of optimism," he admits ruefully, "said that the final volume would be out in a year."

As it happened, Book Five: A Dance with Dragons, due to appear in bookstores next week, took another six years to write. In the meantime, some of Martin's most ardent fans turned from impatient to downright nasty.

Rejecting the author's explanations as to why the densely populated, 1,016-page saga was taking longer than expected to write, skeptical fans began posting wild conspiracy theories on the author's blog and his website, Westeros.org, suggesting he was holding out for various nefarious reasons.

After being stamped out there, angry fans calling themselves GRRuMblers formed new online groups to harass him, including such blogs as Finish the Book, George, brimming with vituperation. The nadir, according to Martin, occurred when so-called fans suggested he might deny their pleasure by "pulling a Jordan" on them - referring to author Robert Jordan, who died before he was able to finish his Wheel of Time fantasy series.

Is this any way to treat the dean of the genre, a master storyteller dubbed "the American Tolkien" and recently named one of 100 most influential people in the world by Time magazine? Martin thinks not.

"I loved Lord of the Rings back in the 60s and like many millions of other people I was eagerly looking forward to The Silmarillion," Martin says. "But it never would have dawned on me to write to Professor Tolkien and say, 'You better hurry up with The Silmarillion before you die, old man.' What kind of cretin does that?"

The question has become less pressing with the release of A Dance with Dragons, the controversy replaced by a new online furor caused by fans posting plot spoilers gleaned from leaked copies of the book. ("If we find out who is responsible," Martin warned on his blog this week, "we will mount his head on a spike.")

But nothing now stands in the way of the sales juggernaut that promises to carry Martin in triumph through the summer of 2011, the prospects of his most eagerly awaited book boosted immeasurably by the success of HBO's lavish serial production of Game of Thrones, the first volume of the Westeros series.

If anything, the success of the TV series is the sweeter triumph for Martin, who began his career writing for television but quit in frustration at the medium's limitations, having spent years developing shows that were never aired.

"I was getting the requisite dump trucks full of money, but it was not what I got into this business for," Martin says now. "When you tell a story you want someone to experience the story."

Confident he could find a publisher for novels, and eager to escape the conceptual limitations imposed by production budgets, Martin dreamed up Westeros and started to write A Game of Thrones. Fifteen years later, having sold five million books in the United States alone, the worm has turned.

"It's ironic that after five years of trying to get a show on the air - and not being able to - that the series of books I thought was completely too big and impossible to film is the thing that gets on the air," he says.

As with so many authors who have mastered the genre game, Martin simultaneously manages to transcend it. "With Ice and Fire I'm trying to do fantasy for people who don't normally like fantasy," he says. Critics applaud the depth of his characterizations and lack of cliché in books that are nonetheless replete with dwarves and dragons.

"I think all these stories are ultimately just stories, and these labels we put on them are just about the furniture," he says. "A good story is a good story. It doesn't matter if it's set in outer space or suburban Detroit or in the 14th century."

Like all classic fantasy novels, however, Martin's are stupendously long and complex: Originally planned as a trilogy, A Song of Ice and Fire has expanded into a promised seven volumes, the first five of which comprise more than 4,000 pages, which detail the intertwining exploits of almost as many different characters.

And the fans are already hungry for the next volume, to be titled The Winds of Winter. The old question is coming back.

"I finally answered the question with A Dance with Dragons and I don't get five minutes peace till they want to know about The Winds of Winter," Martin groans. But he's not really complaining - not at the pinnacle of success. "In retrospect, that's a good question to be asked," he admits. "It just shows that people want to read the books."

So when will Winter come? There is already a lively website devoted to the matter. It's a good question to ask.

"It'll be done when it's done," Martins says. End of conversation. 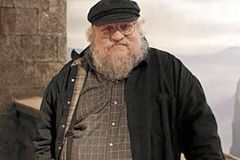