Lurk on the Internet long enough and you're bound to come across evidence of Godwin's Law, the tongue-in-cheek dictum that "as an online discussion grows longer, the probability of a comparison involving Hitler approaches 1."

But with the rise in the West of the so-called "alt-right" – that chaotic confederation of nativists and white supremacists – does Godwin's Law suddenly have validity? After all, are such comparisons really reductive or inherently fallacious when Americans are flying swastika flags, offering stiff-armed Nazi salutes and paraphrasing Mein Kampf?

In order to understand the use and abuse of such comparisons, The Globe and Mail spoke with German writer and historian Volker Ullrich, the author of the massive new biography of Adolf Hitler (the first volume, Hitler: Ascent, 1889-1939, was published in English translation last year). With its nuanced look at the rise of the Nazi Party (and the resistance to it) and Ullrich's controversial decision to examine Hitler as a human being rather than an avatar of monstrous evil, Ascent proves invaluable in understanding the emergence of the Third Reich and offers some lessons for the present.

With neo-Nazism seemingly on the rise in the West, and America in particular, many people are invoking Nazi Germany as a warning. When your book was reviewed in The New York Times, Michiko Kakutani pulled sections that seemed to directly compare Hitler to Donald Trump. Do you see such comparisons as especially useful?

I do not think comparisons between Hitler and Trump are very useful. There are, of course, some features which both have in common: the egomania, the inclination to mix lies and truth, the promise to restore their own nation to the old greatness, resentment against the elites and so on. But, as a rule, such comparisons are misleading because they lead to the dangerous belittlement of Hitler and the crimes committed under his rule.

The historian Antony Beevor has said that "history is not a predictive mechanism." Do comparisons between Nazi Germany and Trump's America risk fatefully misunderstanding history?

Antony Beevor is right: Drawing lessons from the past for the present is a difficult task, because history never repeats itself. An unreflected comparison between Hitler's Germany and Trump's America actually carries the risk of misunderstanding the great differences. I am referring to, for example, the fact that the American Constitution is based on a system of checks and balances, which a man like Trump will hardly be able to eliminate. In addition, its authoritarian powers are hampered by the strength of American civil society and the influence of the great liberal newspapers. In Germany, after the elimination of the Weimar constitution, the equalization of the parties, associations and media, and the establishment of the dictatorship in 1933-1934, there were no longer any opposing forces which could have stifled Hitler's absolute will to power.

In Ascent you describe Hitler as being, in many respects, a "clown" and a "fool." I recall a passage where his adjutant describes the Fuhrer, dressed in formal wear, as resembling "an insane waiter." Was Hitler helped or enabled by people not taking him seriously?

Especially in circles of the left, as in the magazine Die Weltbühne, edited by Carl von Ossietzky, it was not unusual before 1933 to describe Hitler as a "fool" and "clown" and to make him ridiculous in this way. In doing so, they actually helped to minimize the dangers posed by Hitler. The leader of the Nazi Party did not benefit from anything as much as from the tendency of his political opponents to underestimate him. "Hitler's history is the history of his underestimation," a German historian once wrote. This should be a warning to us also in the case of Trump.

Is there a tendency to see the conditions of Nazi Germany – and Hitler himself – as somehow exceptional or unique or impossible to duplicate – as if it was so unbelievable that nothing like that could happen again?

Hitler's name is linked with the biggest breach of civilization in history so far. The singular crime against humanity of the Holocaust would not have been conceivable without him. The campaign against the Soviet Union would not have assumed the dimension of an unprecedented racist extermination war.

Your book was somewhat controversial for "normalizing" Hitler, in particular the chapter "Hitler as a Human Being." Is such an effort necessary in order to offer a complex – or even just a useful – portrait of Hitler?

Yes, in order to get a picture of Hitler as complete as possible, including his striking contradictions, the biographer cannot content himself with dismissing him as an "unperson," as Joachim Fest has done in his 1973 Hitler biography. Moreover, to regard Hitler as a "human being" does not mean arousing sympathies for him or trivializing his crimes. On the contrary, it is a common mistake to assume that a man who was responsible for monstrous crimes must have been personally a monster. It is much more disturbing to know that this was not the case.

More to the point: Do you think the public prefers to think of Hitler as a uniquely evil monster and not a human being? Is there a certain comfort in seeing him this way?

It is, of course, more convenient for the Germans to imagine Hitler as an embodiment of the devil. This demonizing tendency actually dominated the image of Hitler after 1945 and not only obscured the view of the real person but also served as an excellent way to relieve blame among German society, especially social elites, in the rise of Hitler and the crimes of Nazism.

Many politicians in the 1930s seemed to believe that a stronger conservative government could effectively stop the rise of Nazism – or at least work to "moderate" Hitler. Do you see a similar concern in America, where many seem to believe that modern conservatism, or the Republican Party, is not conservative enough?

Among German conservatives before 1933, the idea that Hitler's ascent could be slowed down or that the government could exert influence on him was seen in the approach of some of his pragmatic demands – that is, moving further and further to the right in the political spectrum. Once in power, Hitler safeguarded against all attempts to curb his ambition for power, outmanoeuvring all opponents. Whether the Republicans in the United States will be able to exert a civilizing influence on Trump, I cannot judge. The dismissal of Steve Bannon seems to indicate that the more moderate forces in the government retain the upper hand for the time being. On the other hand, Trump's attitude to the riots in Charlottesville shows that his sympathies with the "alt-right" movement have not yet disappeared.

I want to talk a bit about the resistance to Nazism. Many in America choose to believe that the so-called "antifa" – anti-fascist groups – are "just as bad" as far-right, nativist, white supremacist groups. It's a line of thinking that seems to deny the role socialist, communist, Christian and other anti-fascist groups played in 20th-century Europe, from Italy to Yugoslavia to Germany and of course Spain during the Civil War. Have such united fronts proved historically effective? Does it make sense to combat violence with more violence?

In Germany, too, right-wing and left-wing radicals are often lumped together. This is deeply unfair, particularly against the backdrop of the decline of the Weimar Republic and the establishment of the Nazi dictatorship. It was the political left, Social Democrats and Communists, who had most decisively opposed the National Socialists. However, their anti-fascism suffered from the fact that both parties were divided and could not agree on a common defence. Of course, it makes no sense to fight violence with even more violence. With regard to the situation before 1933, however, one must bear in mind that the violence emanated from the SAs [Sturmabteilung, the Nazi paramilitary wing], and the opposing forces of the SPD [Sozialdemokratische Partei Deutschlands, the German Social-Democratic Party] and the KPD [Kommunistische Partei Deutschlands, the German Communist Party] were taking legitimate action to defend their milieus.

In one of Richard J. Evans' histories of the Third Reich, he mentions that Joseph Goebbels called democracy "stupid," claiming that it was so decadent that it would permit its own destruction. I see far-right groups in America taking advantage of this stupidity, particularly in the way their agitation is protected by the First Amendment, which guarantees a right to free speech. Are these rights a challenge to fighting nationalism and nasty ideologies? To what extent can the people be expected to tolerate intolerance itself?

This is a very difficult question, for which I cannot provide a general answer. The Germans have learned from the experience of the failure of the Weimar Republic that tolerance against the enemies of democracy is not appropriate and that all dangers must be defended in time. The United States has been spared, thank God, the experience of a totalitarian dictatorship. Here one can, it seems to me, afford more serenity in dealing with right-radical groups. It is dangerous, of course, when these groups believe to be able to reckon with the implicit sympathies of the President and his advisers and feel encouraged to act more and more offensively in public life.

Even before Donald Trump, we were living in the time of Tartuffe
August 25, 2017 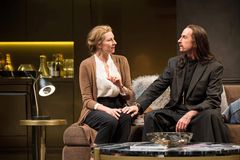