The Globe book club tackled Prisoner of Tehran for our second selection. John Mundy, former Canadian ambassador to Iran, joined our book club. Here is a selection of the questions and his responses.

From reader Gabriel Fritzen How effective do you expect sanctions to be against Iran? What is the precise objective? What would be the exact internal politial process inside Iran that would lead to the West's desired result? What is the West's real objective? To what extent can Iran circumvent sanctions via Russia or China?

JM: Sanctions are creating increasing economic pressure on Iran and must be having some effect on its leaders. That said, sanctions are a blunt instrument and do not have a good track record of forcing rapid change on other countries which have been sanctioned in the past. I think a sanctions policy will have to be combined with active diplomacy to convince Iran that its best course is to clearly renounce nuclear weapons and rejoin the international community.

From Sandra Martin The recent history of Iran is so turbulent. Has it always been that way?

JM: Iran has had a very turbulent history during the past century. As the old Qajar dynasty decayed, Imperial Russia and Great Britain moved into the power vacuum and began dismembering the Persian empire. During the second world war the country was occupied by both powers and afterwards suffered a coup when nationalist leaders tried to nationalize its oil resources which had been developed by the British. There was relative stability under the Shah during the 1960s and 1970s but the pace of modernization and the level of repression by the Sha againist his political opponents led to the 1978 revolution.

From Sandra Martin Prisoner of Tehran bridges two very distinct era and leaders in Iran--the pro-Western regime of the Shah and the Islamic Revolution led by the Ayatollah Khomeini. Can we talk first about life under the Shah as Nemat describes it? How democratic was life under the Shah?

JM: The Shah tried to modernize the economy and society of Iran but maintained strict political control. He undertook land reform and industrialized the economy using oil revenues. This benefited secular society but alienated conservative groups. When the later began to organize and push back the Shah increasingly resorted to political repression to maintain control. He created a a state security service known as SAVAK which was responsible for many human rights violations and set the stage for the revolution.

From Sandra Martin One of Nemat's relatives compares the Islamic Revolution to the Russian one against the Tsar. How apt is that comparison?

JM: Russian vs Iranian Revolution: Both revolutions were fundamental in the sense that the leaders were trying to redefine the relationship between the citizen and the state. Both were violent and both led to repression of any dissent .Both were probably also saved by a war which caused the population to rally around the revolutionary leaders. The Russian revolution however was atheist and probably more violent.

From Sandra Martin There are elections right now in Iran. What do you think will happen. Will this be good or bad for Canada's relations with Iran.

JM: Current Elections: The current elections appear to have consolidated the Supreme Leader's power at the expense of President Ahmadinejad. It is possible that the Supreme Leader might use his parliamentary majority to revise the constitution and abolish the position of a directly elected President. This will mean even less democracy in Iran. Canada's relations with Iran are already at a low ebb and I don;t think this will have much effect

Globe Book Club: Your guide to Prisoner of Tehran
March 19, 2012 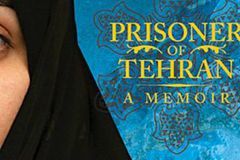 Follow Amberly McAteer on Twitter @amberlym
Report an error
Due to technical reasons, we have temporarily removed commenting from our articles. We hope to have this fixed soon. Thank you for your patience. If you are looking to give feedback on our new site, please send it along to feedback@globeandmail.com. If you want to write a letter to the editor, please forward to letters@globeandmail.com.
Comments