Behind the door of a grey brick semi in Toronto, all I can hear is laughter. Teva Harrison opens the door dressed in jeans, a teal scarf and slippers. She is warm, sunny and seemingly beaming with health. But she’s not. Harrison was diagnosed with Stage 4 breast cancer in 2013 at the age of 37, and has lived longer than she – and her doctors – expected. Two to three years is the average for this diagnoses. Five, tops. She’s determined to get there.

The source of her positivity? Her family says she was born with a glass-half-full personality. So while cancer saps her of energy and consumes her days (and nights), it hasn’t diminished her determination to make the most of every day she has left.

Harrison’s new memoir and graphic novel, In-Between Days, will be published by Anansi Press on April 23. The novel, which she started roughly a year after her October, 2013, diagnosis, is a raw account of what it’s like to face an incurable disease while in the prime of life. In it, Harrison tackles everything from losing her independence and having to be reliant on friends for simple things like washing floors; having to scale back dreams of a happily ever after and mourning a diminished sex life.

“I started drawing to deal with the depression,” she says. “On focusing on something in front of me, and drawing my experience of living with cancer and new experiences related to being sick,” she tells me.

One particularly poignant comic deals with the awkwardness of making small talk when she’s out socially. “So what do you do?” a stranger asks. “I’m on sabbatical. I’m on leave from work. I draw mostly. How about one more try? I have cancer. Mostly, I do that.” 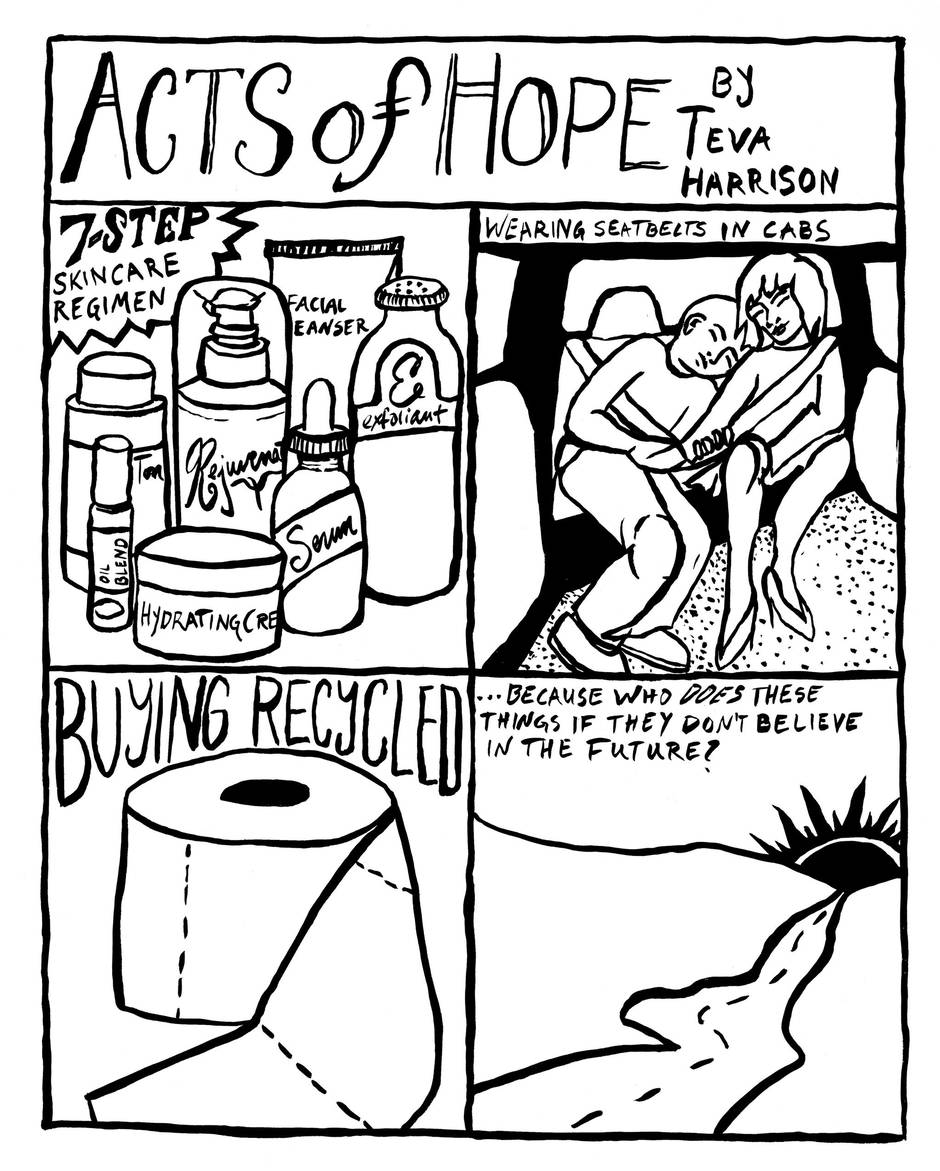 While cancer saps Teva Harrison of her time and energy, it hasn't taken away her sunny personality. (Teva Harrison)

Harrison has always been creative – writing, painting – but she had never drawn cartoons before cancer struck. This book – and the whimsical illustrations in it – came about because her doctor and husband David Leonard, director of events at the Walrus Foundation, encouraged her to channel her energy into something that made her happy. So she started posting some of her comics on a blog. Within days, she had an online following from across Canada of cancer patients, who are desperate to connect with people sharing their story. And, soon after, from around the world.

Their words of encouragement lifted her. “I’ve had an amazing reaction to the comics,” says Harrison, who, prior to her “dream job” working as head of marketing at the Nature Conservancy of Canada, worked at literary magazine Quill & Quire. “There was a Christian nun living in Tel Aviv with the same diagnosis as me, and she found me the instant I went online. She reached out with support immediately, encouraging me, telling me that my voice is important. It was so nice.

“People like us don’t have any kind of set timeline. We all have to be present right now because … it could all turn on a dime.”

What does her husband think of the book? Some of the pages are harder than others for Leonard to read. “The hardest are the ones where I appear. Some of the bits of me are lovely, lovely recollections of our life. But some are also the hardest moments in her life – and in our shared life. I live with her every day as well, so reliving it is difficult. But drawing those moments for her is a way to put a mark on paper.”

“When you get married,” Harrison says, “the promise is forever and you think the reality will be forever. And David and I have such a lovely love story. But the idea of ‘forever’ that we had is now very different.”

Harrison spends about two hours a day drawing. But her stamina hinges on her energy level and the number of hospital appointments she has (she is currently in a clinical trial), or how she’s coping with the pain and cocktail of medications.

When she got her first diagnosis of Stage 3 breast cancer, she remembers going home and crying with her husband. But they believed then her cancer was curable, so they had hope. But a week later, they found out the horrible news that it was Stage 4. Incurable. “That day, I’ve never felt worse. It felt like an immediate death sentence.” And because her cancer isn’t curable, she’s on a less lethal combination of medication than people who have a fighting chance of beating the disease. The upside of that? Harrison rhymes off a few gratitudes: She hasn’t lost her hair. She still has taste buds. She’s lost weight, but not to an alarming degree. “I’m smaller than I’ve been since early high school,” she chuckles.

Teva’s sister, Malu Wilkinson, who lives with her family in Portland, Ore., is coming to Toronto on May 4 for the book launch at the Gladstone Hotel. “I’m thrilled for her because this is the kind of work Teva always wanted to do. I just wish it didn’t have to be about this topic. But [the process of drawing and writing] has provided Teva with a way to live with the situation she’s in,” Wilkinson, 45, says. “Teva is an optimistic person at heart, and the book’s given her a powerful tool to work through her grief.”

In a way, this book is Harrison’s legacy, but she would be loath to call it that. It sounds too pretentious. “I called it In-Between Days because this is about living so much of my life in waiting rooms now, instead of destinations. It’s a very different way of occupying space. It’s about figuring out how to move forward.

“I’ve always been one of those people who couldn’t do enough,” she says. “There’s still so much I want to do. I just want to take it all in. Experience it all. Be there and share it.” 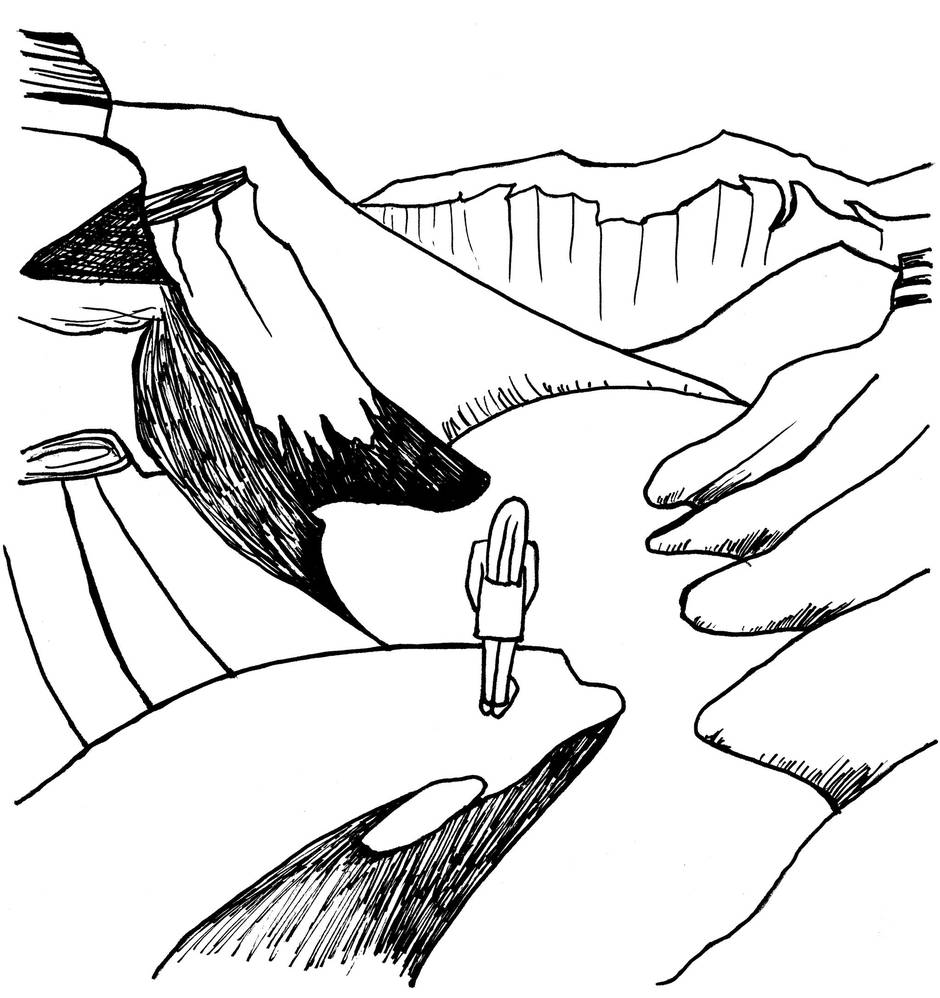 Teva Harrison says she started working on the graphic memoir, In-Between Days, to help deal with the depression brought on by cancer. (Teva Harrison)

On good days, she does that. In 2014, she and her best friend, Cameo, climbed Newfoundland’s Grouse Mountain with 25 other cancer patients. Cameo offered to carry her bag if she felt too weak. Harrison managed. “In the end, I was able to carry my own bag,” Harrison remembers. “I was able to climb to the top of the mountain. And it was unbelievable. After having my abilities diminish so consistently, for such a long time, and after feeling so helpless, the feeling was so expansive. I felt hope in a way I hadn’t in a long, long time.”

She still travels to see family (her sisters and mom live in the United States) and takes holidays with Leonard (they recently got back from Tulum, Mexico, and are planning a safari in South Africa this summer).

Last summer, she and Cameo made extravagant mermaid costumes and walked in the annual Mermaid Parade (yes, there is one), on Coney Island. “There were men wearing giant wigs supporting model ships, a woman dressed as a lobster, schools of fish, and more Poseidons that I could count,” Harrison recalls. “It was exhausting, but I wanted to dress up as a mermaid. There is something magical and fantastical about it. And I’m at the point right now where I just say yes to things. I had a little girl dream and I grabbed onto it.”

A timer goes off in the kitchen. It’s time again for her medication. She gets up and returns with a plate of molasses-sprinkle cookies. “This disease will kill me eventually, but it could be years and years and years,” she says. “I have to count on that. In the meantime, I am going to say yes to even more. Live like a tornado, when I can. I’m going to suck the marrow out of life and see what I’ve been missing.”