I don’t know – was I surprised or not surprised by the sudden closing of our local newspaper, the Guelph Mercury?

Initially, yes – mostly because I thought it was doing all right. Not that I am especially plugged in to “what’s what” here in Guelph, Ont., but I hadn’t heard any inklings that it was in dire trouble.

True, I was taken aback for a moment … but then, with resignation, not much surprised, really. Nowadays, when you hear a newspaper has closed its doors that isn’t exactly shocking news.

It is very dispiriting, though. I don’t subscribe (pardon the pun) to the idea that printed newspapers are out of touch with the current culture. Why do people believe this? Just because digital devices are ubiquitous at the moment doesn’t mean that reading a physical newspaper is an absurd act. Can’t we do both? Are we that limited in our thinking? 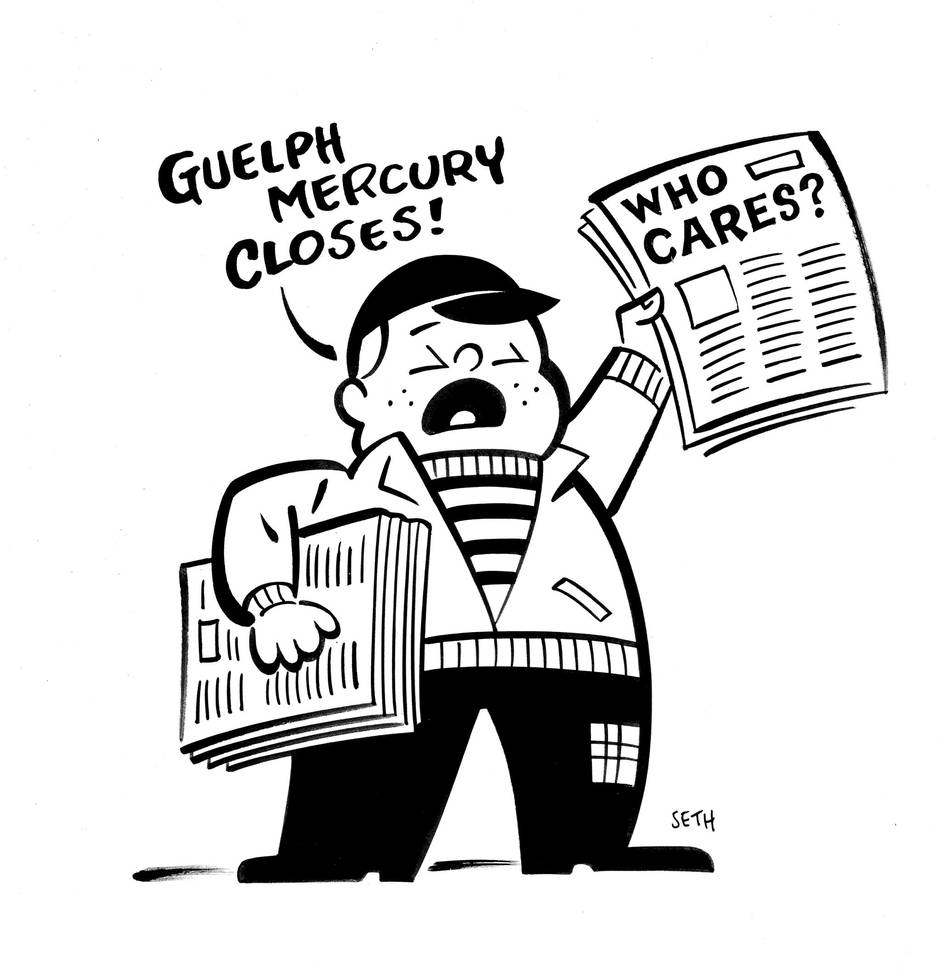 Have people forgotten the pleasure of opening a newspaper and being presented with a finite canvas – a carefully curated capsule of what is happening in our world today? Must it be a scrolling, infinite labyrinth of hyperlinks or nothing at all? Forgive me, I’m off on a tangent. I know most people read the newspaper online anyway. The culture wars of print versus digital are not what I’m supposed to be writing about here.

Back to the Guelph Mercury. Its closing is a loss. A real loss to Guelph.

I didn’t subscribe to the paper myself – this is not a shameful admission. You see, my wife, Tania, subscribes to “The Merc” at her barber shop (The Crown) and then brings it home for me at the end of the day, so I always see the news the day after. That’s fine with me. I’m not in a great hurry for the local news. I can wait a day. What’s the rush, everybody?

By the time I get the paper it is well-thumbed. More thumbed than the Globe or the Post (which also come home to me). Often those papers haven’t even been unfolded by Tania’s customers. Why is that? Well, it’s not because the Mercury was the best paper in Canada, it’s because it was the local paper. Believe it or not, even in this current worldwide mega-culture people still have some desire to be connected to where they live.

Thinking about it, I’d be hard-pressed to come up with another example, besides a local paper, that so effectively does that job. I mean, simply living somewhere doesn’t necessarily connect you to a place. You can live in Guelph, for example, yet spend your entire inner-life online – living in some “neitherworld” of neither here nor there.

If you are not actively involved in the local culture – somehow personally invested in it – it’s pretty easy for that place to simply be where you sleep and buy your groceries.

Reading the local paper is such a vivid reminder of where you are and sometimes, who you are, too.

When I moved here from Toronto around the turn of the century (this one, not the 19th century) it took me some time until I felt like a Guelphite. Quite some time. Maybe a decade. I was very invested in being a Torontonian. I’d lived 20 years there. It was a big part of my identity. Unlike most people, I spend the majority of my time at home (in my studio) and so I didn’t connect all that quickly to Guelph.

Three things helped me put down roots here. First, marrying a Guelphite. That was the big one. Second, the support I’ve received, as an artist, from the community. They’ve really embraced me over the years and made me one of “their own.”

And third, reading the Guelph Mercury.

That daily experience of seeing your local places, names and events creates a kind of resonance and connection and investment with where you live. Canadians pay a lot of lip service to the importance of telling Canadian stories. We are so used to seeing American references that just watching a movie, for example, set in a Canadian place will “charge us up” with local feeling. A sense of seeing “ourselves” portrayed.

That’s the daily charge of a local paper. Investing you with news and culture of YOUR PLACE. Take that away and you genuinely diminish that feeling in a community.

That is a real loss. Especially in a world where people are increasingly living in a central abstract space. A “no place.”

I’m an old-fashioned person. That’s no revelation to anyone who knows me or my work. I’m clinging to old models and mediums that, in my opinion, have deep and resonant value. Once they close we will never see complex institutions like local papers reopen. It’s sad to see our paper locking its doors. I won’t pretend to know much of The Merc’s long, important history. I’ve only been a Guelphite for about 16 years.

Some folks will surely say that if a newspaper can’t survive in the current media climate then its days were well over anyway. Move on.

Naturally, I disagree. The Mercury didn’t close because it wasn’t needed. It closed because you can’t make any money selling newspaper ads any longer. In my opinion, you don’t replace something valuable with nothing. What will fill that important role for Guelph now?

I guess, at the barber shop, we’ll subscribe to the Kitchener Record now. Kitchener is nearby. Not the same thing, though. That is, if the Record is still in business. I better Google it and find out first.