Not that long ago, Canada was described as a self-governing colony, a mildly amusing oxymoron like Microsoft Works or Ottawa nightlife. But there's a more disturbing predicament in the air, raised by this book of revelations, and that is: Do we have a federal government ruling the country, or is it a hit squad that represents very little beyond belligerent self-interest?

According to Globe and Mail columnist Lawrence Martin, the trains run on time in Harperland, but all else is left to the tight-fisted control of its namesake.

Since Canada isn't blessed with a resident king, queen, pope, imam (yet) or any role model except Don Cherry, the country's leader - politically, economically, culturally and yes, even spiritually - is our Prime Minister, Stephen Harper, by name and by vocation. He has shifted the Conservative Party into a libertarian cul-de-sac that has prevented him from wining parliamentary majorities three times running.

In this first political biography of the man and his times, Martin briefly acknowledges Harper's success of becoming the only head of government in Canadian history who didn't serve his apprenticeship with the Liberal or Conservative synchronized swim teams that usually splash about at the federal summit.

He simmered up as a key organizer and campaign chairman for the Reform Party, which took over Alberta's right-wing franchise from Social Credit. Because he arrives in the book's pages fully formed, there isn't nearly enough background to explain how this self-confessed outsider managed to stage a reverse takeover of the Conservative Party. That might have provided some clues to Harper's disturbing habit of periodically lapsing into an ideologically driven Zen state that triggers an unerring compulsion to go for his own jugular.

Unlike most of the newshounds in the Parliamentary Press Gallery, Martin has an original mind and plays no fear or favour. Both qualities make him suspect by his peers, but in Harperland he comes out swinging, retaining his journalistic neutrality by attacking everybody. It is no bloodless audit.

Even before the book was published, Dimitri Soudas, who is Harper's chief spokesman, was dismissing it as having been written by "a big-L Liberal sympathizer." Hardly. Lawrence Martin was fired by the Asper family (whose newspaper chain was then loyally Liberal) as their Ottawa columnist for leading the assault on Liberal prime minister Jean Chrétien during the Shawinigate scandal.

Significantly, it is Harper's senior advisers who emerge as this book's most productive sources. They are quoted twice as frequently as his Liberal critics. And what a story they tell. This is Stephen Harper unplugged. "Much of his story involved a campaign against himself, against the opposition within," the author maintains. "That opposition was the dark, vindictive side of his character - a side that at times he could not subdue, and that on several occasions threatened to bring him down."

The Harper power trip's worst characteristic is how personal it can be. One of his government's welcome features has been to return a feeling of pride to our military by treating them with the priority considerations they deserve. The front-line cheerleader on this mission was, of course, chief of defence staff Rick Hillier, whose only misdemeanour, according to Harperland, was his popularity, which was enough to prevent his reappointment. Even more puzzling has been the PM's treatment of Helena Guergis, who was fired from the cabinet, barred from the Tory caucus and forbidden to run in her riding as a Conservative. All this, despite being totally cleared of any wrongdoing by the RCMP and Ottawa's Ethics Commissioner. No explanation has been given or offered for her shabby treatment.

The book's most telling chapters deal with the Prime Minister's absolute domination of his party, his ministers, his cabinet and the every aspect of government. No subgroups that ordinarily share power with incumbent PMs - such as a youth wings, ethnic wings, provincial wings or regional councils - are allowed to exist. Every detail of every function is masterminded by its master, right down the wardrobes of his spokespersons and the call of the fake loon in the fake G20 lake. According to Tory consultant Tim Powers, this garrison mentality amounts to "effectively a battle on a daily basis - and everything is calculated that way." Martin describes the confrontation between Liberal Leader Michael Ignatieff and the PM as "Nobleman versus the Doberman."

One of the volume's most fascinating undercurrents is that the omnipotent Harper mystique has its limits. None of his confidants dares to speculate about a Harper majority following the next election. This is forbidden territory, since such a prospect would frighten the horses.

Martin praises Stephen Harper as "one of the more talented Canadian political leaders to come along in decades. His range of knowledge, the precision of his mind, his degree of discipline, his capacity to strategize, to work his way through whatever maze stood before him, was of an unusually high standard." But the author also issues a warning.

"It was no small wonder that Canadians feared what Harper might do with a majority government," Harperland concludes. "With that kind of power he could establish a hegemony the likes of which Canadians could not imagine." 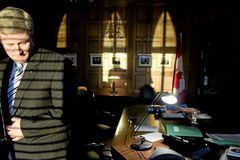 The quotable Stephen Harper: Not exactly Churchill, but not bad either
October 8, 2010 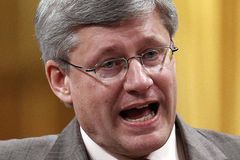