Like many fiction writers, novelist David Mitchell prefers a quiet life. "I don't really like publicity," he says, laughing softly into the phone. "I want to write books and live in my corner of Ireland and basically not meet anyone."

But Mitchell's life was thrown into a state of extreme disquiet a few years ago when his second child, a boy, was diagnosed with autism. The diagnosis was, he says, devastating. While his wife, Keiko Yoshida, is stoic by nature, the Booker Prize-nominated author of Cloud Atlas admits he was thrown for a turn. "For a while," he says, "I was quite morose and Eeyorish about what the future held."

But everything changed when Yoshida, who is originally from Japan, ordered a book online that altered the way the couple viewed their son and his condition. The Reason I Jump, by then-13-year-old author Naoki Higashida, was originally published in 2007 in Japanese. It is a slim, elliptical volume that explains, in a question-and-answer format, what it feels like to be an autistic child.

Higashida's questions are basic but burning – eliciting exactly the sort of information an autistic parent would be most anxious to know. Example: "Why don't you make eye contact when you're talking?" Answer: "What we're actually looking at is the other person's voice. Voices may not be visible things, but we're trying to listen to the other person with all of our sense organs."

Higashida uses the term "talking" somewhat loosely; he was not fully verbal when he wrote the book. The volume was written over hundreds of painstaking hours during which a helper pointed to Japanese characters on a cardboard graph, and Higashida indicated which were the ones he needed, until sentences and paragraphs were formed. In that sense, it is not unlike Jean-Dominique Bauby's The Diving Bell and the Butterfly, written with the aid of an assistant while Bauby was suffering from a condition known as locked-in syndrome.

Higashida, we learn, is anything but locked in. His vision of the world through autism is filled with loneliness, fear and despair, but also moments of excitement and of dazzling beauty. Describing the visual aspect of his condition, he writes, "When a colour is vivid or a shape is eye-catching, then that's the detail that claims our attention, and then our hearts kind of drown in it, and we can't concentrate on anything else."

The book showed such astonishing self-awareness and insight that Mitchell finally felt he had gained some access to the mysterious world of his son's autism. "It helped me so much," he recalls, "and profoundly altered the way I viewed my son."

Shortly after reading The Reason I Jump, he and his wife began working on a translation for their small circle of friends with autistic children. As they did so, they realized the book had the potential to reach a much wider audience. This summer, their English-language version came out in Britain; it was published in Canada and the United States in late August.

So much for Mitchell's quiet life: He has been promoting the book on both sides of the pond, and as a result has seen himself caught in the fractious cultural debate surrounding autism.

While he is not a believer in homeopathic cures or in the scientifically discredited "link" between the MMR vaccine and autism, he has become, almost unwittingly, a powerful and articulate advocate for a deeper understanding of the condition. When I mention the widely accepted notion of autism being a disorder that exists on a "spectrum," he bridles slightly.

"The spectrum metaphor is handy. It's a highly adhesive handle on which you can get a grip on this nebulous, strange neuropsychic phenomenon; but, like most metaphors, it's a double-edged sword. It simplifies what is subtle and highly complex, to try to grade autism on a scale from moderate to severe as if it's a kind of flu. It's unhelpful. Where does autism end and the personality begin? It's impossible to know."

Instead, Mitchell prefers to see autism as a "constellation of positions" that change over the course of a lifetime, or even a single day. His own son, he says, can quickly shift from seeming "profoundly challenged" to analyzing clues, like Sherlock Holmes, in an effort to find out where, say, the chocolate cookies are hidden. The space in between those extremes is where the autistic child lives, and it is a space Higashida's book has helped Mitchell to inhabit – or at least realistically imagine.

Has the experience of being an autistic dad changed the way Mitchell approaches his own work as a novelist? Yes, he says, in an indirect way.

"Writing is about getting inside people's heads, but it's also about investigating the heart and the soul. What being the father of a non-autistic kid teaches you about patience and love – that is amplified 20 times when your kid has autism. That is what I write from. That is the material. So yes, it's given me vast amounts of raw material, not necessarily about autism itself but about people."

He adds, however, that "if I ever want to write about autism in a fictional way, I'll be pretty damn qualified to do so." He has written a short piece dealing with the subject, he concedes cautiously, that may "grow into something some day."

Until then, Mitchell will continue to promote Higashida's book in the English-speaking world. And when that's done, he plans to resume his quiet life. 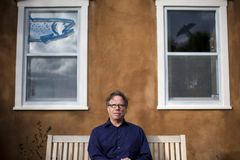 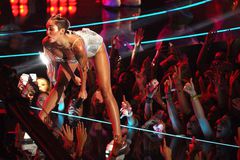 The LiLo horror show? Just part of the The Canyons story
August 2, 2013 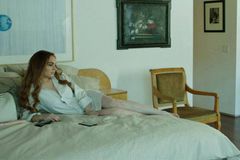