In the first New York Times review of Dave Eggers's first book, A Heartbreaking Work of Staggering Genius, in February, 2000, the word hip was used. Also slacker, self-conscious, post-modern and David Foster Wallace. This was long before hip became such a puzzlingly ambivalent word, before the word hipster came into common parlance as such a fraught dividing line, a tension-sparking insult that invariably leads to the people being so described denouncing the very existence of such a type. It was before hipster meant a certain sartorial style and a kind of bicycle.

But looking back one has to admit, Eggers was a kind of proto-hipster – the ur-hipster, even. I remember that time, when the book came out, and the kind of person who grew instantly enthusiastic about it: They were the clever kids who were also unafraid of popular culture; they had an unabashed fascination with the United States; they used the Internet with ease and they were concerned about the environment. They went on to run magazines. In subsequent years, Eggers became a hero to them – and to the rest of the literary world as well – for his many creative projects that included art, idealistic philanthropy, activism and a literary publishing house and magazine that were both intellectual and quirky. These things made him enviable to the kind of educated person who was on the cutting edge of social trends and technology.

Exactly the same kind of people, in other words, who are lining up to pillory him now.

Eggers has just released a novel, a big blockbuster potboiler of a novel, a dystopian science-fiction story about an evil Internet empire that controls all social media and is going to control all of its users by extinguishing every last remnant of privacy. The book is called The Circle. Even before it appeared in physical form on shelves it was provoking caustic response from people who are presumably feeling themselves targeted by its satire: tech experts and people who spend their lives on the Internet. An opinion writer for Reuters castigated him for "getting Silicon Valley wrong," others who have worked for tech giants have made ploddingly literal-minded catalogues of Eggers's fictional inventions that couldn't be real.

Gawker, spurred into ecstatic disdain by the praise of The New York Times and The Wall Street Journal, then let him have it with both barrels, calling the book "pulpy" and "naive" and repeating claims that Eggers just doesn't "get" Silicon Valley, and also – most damning of all – doesn't even regularly use Twitter himself. Then suddenly the fact that Eggers doesn't use Twitter and admitted in an e-mail that he had done no research on any actual technology companies – the arrogance, for a novelist, to make things up! – became the big story and the Internet attacks became all about him rather than about his novel.

And then the inevitable comparison to Jonathan Franzen occurs. Franzen, another middle-aged male American novelist – he is 54, Eggers 43 – also incurred the wrath of the tweeting classes just a few weeks ago with a book excerpt he published in The Guardian that denounced a lot of the contemporary world, including its penchant for brief and instant communication.

Franzen is no stranger to this kind of loathing, having attacked mass culture and Twitter long before; he is easily assigned the role of aging conservative, defender of some kind of ancien regime, white privilege, maleness, whatever. But it comes as some surprise, to me at least, that Eggers suddenly finds himself in this category as well. Where are all the fair-trade, gluten-free San Francisco Eggerites, fans of McSweeney's and The Believer, going to fall on this?

One by one, the kind of writer one might have expected to revere Eggers is appearing before the people's tribunals to denounce him. A brazen essay appeared this week in the Canadian online magazine Hazlitt, written by a technology writer, formerly of Wired, named Tim Carmody. Titled, simply enough, "This Isn't Franzen's World Anymore," it makes the stark and startling argument that fiction itself is simply inadequate these days in any effort to describe the world, and that (I guess) it is only non-fiction, written by technical experts, that can have any moral authority.

His examples of the failings of the novel are Jonathan Franzen and Dave Eggers – who are presented as being basically the same man, and representatives of all fiction, for having both written criticism of new means of communication (in which of course Tim Carmody is a specialist).

Neither Franzen nor Eggers, he argues, have any authority to write about technologies that they themselves are not fully immersed in, and this failing is not just theirs, but one of the novel itself. That's right, the novel; the art form. "The real issue, it seems, is the declining moral and critical standing of the novelist," writes Carmody. "… The gap today is really between people who still want to assign literary novelists that role [of being central to cultural discourse] and people for whom only nonfiction will do the job." It's pretty clear which kind of writing Carmody himself would choose. Enough with the fanciful tales, back to facts and figures!

In all of this lining up on predictable sides, the novel itself is being lost. And honestly, it is not worth all this debate. The Circle is a very conventional sci-fi novel about an apparently benign corporation that promises social reform and equality and secretly wants to take your freedom away. The book warns that a lack of privacy can lead to political control, a fact that has already occurred to even the most devoted Facebook user. It is pulp fiction. Its protagonist is ludicrously gullible, as are most of the inhabitants of the planet. Its antecedents are the most famous of dystopian fictions, from 1984 to Logan's Run. Its biggest plot secret – the identity of a mysterious stranger, revealed toward the end – is obvious.

What surprises me most about it is the conventionality of its style. It contains no postmodern self-referential cleverness, not even any of the compression and elision that marks so much contemporary fiction. It's past-tense, third person, with a garrulous narrator who doesn't mind stepping in for a little exposition now and then.

Why is it that futuristic fiction, informed by the most contemporary of discussions about the most recent of social trends, is usually so formally old-fashioned? These novels – from Ray Bradbury to William Gibson – are in structure and delivery not postmodern or even modern; they are premodern. This is generally, in fact, how we distinguish between genre and literary fiction: genre is wild in its imaginings, stodgy in its style; literary is stodgy in its imaginings, wild in its style. It is rare to see a collision of innovative social thinking and innovative technique. All this should, I think, be more worthy of discussion than what Eggers said to a reporter in an e-mail or how old he is.

It undermines comparisons with Franzen as well. Franzen is a more adventurous stylist – a prettier sentence-maker, frankly – and a more subtle and nuanced storyteller. And his novels are not apocalyptic. Believe it or not, these are two different guys, not representatives of some kind of aging and tyrannical dictatorship, like the generals of the First World War. I wonder if Eggers was just trying too hard to be relevant, cutting edge, too. To please, perhaps, the tech writers at Wired. I wonder if he might not have come up with something more powerful had he stuck to smaller and more personal stories. If he had tried not to have had any consciousness at all of the terribly fickle and vindictively shifting tides of fashion. 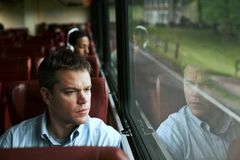 Book Review
A Hologram for the King, by Dave Eggers
July 6, 2012 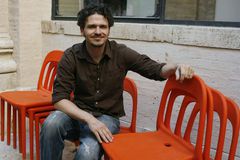 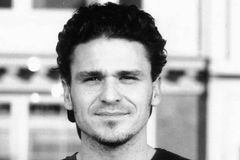