Marsha Lederman's obituary of Richard Wagamese on Saturday described his life-changing experience in a St. Catharines, Ont., library when he was a homeless teenager. I am a librarian in Oakville, Ont. In September, 2013, I attended a reading for Richard's book Ragged Company, along with my colleague Ruth Borst. His words that night were unforgettable.

Ragged Company tells the story of four homeless people who find a lottery ticket and win $3.5-million. It's a powerful, beautifully written novel that deepens one's understanding of the homeless.

After Richard's talk, someone in the audience asked him to speak about his education and the important teachers he'd had. He asked how many librarians were in the room. Ruth and I put up our hands along with about 15 other people. He then told us about the St. Catharines librarian who changed his life.

Richard spent every day in the library there, where it was warm and dry, behind a stack of books on his desk. He told us more about the special librarian who answered his questions patiently, recommended books and quietly brought him food.

One day, Richard asked her about a musician he'd been reading about, named Beethoven. He said, "Did you know he was deaf and still composed symphonies, and he could put a hand on the lid of the piano and recognize the notes by their vibration?" The librarian asked Richard if he would like to hear some of Beethoven's music, and she took him to the listening room.

Shortly after, she took him to see Beethoven's opera, Fidelio, in Toronto. This was followed by outings to see Tchaikovsky's Romeo and Juliet and to art galleries. She opened the world for him. He told us that the librarian taught him to read, see, hear and feel through everything she introduced to him.

Richard left St. Catharines and turned his life around. He lost touch with the librarian but never forgot her. He became a journalist and became the first aboriginal writer to win the National Newspaper Award for column writing, in 1990. Stories about his win appeared in all the newspapers. One day he received a card from the librarian. She told Richard how proud she was of his accomplishments. Richard was touched by those words then, and still so emotional about them that he had to pause, speaking through his tears. He realized the librarian probably didn't know what a big part she played in his success.

Two years later, he got a call from one of the librarian's children. She had died and her family asked if he would come to the funeral.

So he flew from Alberta to St. Catharines. At the church, he got out of the car and was surrounded by the librarian's five adult children.

They had never met Richard, but they embraced him in a group hug. They told him he was a central figure in their upbringing. Their mother always talked about Richard at home, telling her kids about what he was reading or learning. They said they were never allowed to complain about their own lives or struggles in school, because their mom would say, "Look what Richard is doing and he has so little." The kids felt they owed much of their own success to Richard's inspiration.

We're fairly certain that Richard ended his talk by encouraging us to treat the homeless with respect, and to help them. We can't be sure though, as Ruth and I were so emotional and looking at him through tears. We were both thinking about the homeless customers who spent time in our library, and how we might help them.

I never felt so proud to be a librarian as I did that evening, or more resolved to treat the homeless with respect and understanding. I will miss Richard's voice. Canada has lost a great storyteller and writer. 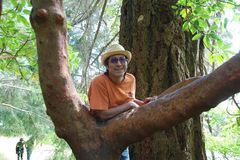 Richard Wagamese: Remembering a kind spirit
March 17, 2017
Award-winning Ojibway author Richard Wagamese dies at age 61
March 11, 2017
Follow us on Twitter @globeandmail Opens in a new window
Report an error
Due to technical reasons, we have temporarily removed commenting from our articles. We hope to have this fixed soon. Thank you for your patience. If you are looking to give feedback on our new site, please send it along to feedback@globeandmail.com. If you want to write a letter to the editor, please forward to letters@globeandmail.com.
Comments