It was the walruses that saved The Walrus.

Four years ago, The Walrus magazine hit a dire financial reality: Revenue from its display advertising was in free fall. To be sure, the magazine had never aspired to be a commercial blockbuster, and it was launched in the fall of 2003 with the backing of a $5-million pledge by a private family foundation.

But while the entire print media industry suffered through the recession, The Walrus's troubles seemed to be existential. Among other things, annual ad sales dropped from $1.5-million to about half that amount in 2009.

But it turns out that Walrus readers like to watch real walruses. Whales and seals, too. And they like to circumnavigate Newfoundland, and listen to articulate people expound on the meaning of Newfoundland in Canada.

Which is why, since those dark days in 2009, The Walrus has proved itself to be a surprisingly speedy and adaptable creature, pursuing revenue from a clutch of activities that include travel and from the burgeoning business of special events. To some, the mere fact The Walrus is still around to publish its 10th anniversary issue, hitting newsstands on Tuesday, is an astonishing achievement.

And though it has unique government-approved privileges that are out of the reach of its newsstand compatriots, the survival strategy of The Walrus – which is published by a foundation dedicated to education – may hold a lesson or two for other struggling media companies.

The Walrus is no longer just a magazine published 10 times a year; it is a multiplatform brand that finds expression in a tablet edition, a blog, podcasts, e-books, a series of short non-fiction films, speaking events and sometimes even a cruise through the Northwest Passage.

Each feeds the other, sometimes in spirit and promotional force (a podcast may offer a reporter's reminiscences of grappling with a particular interview subject), and sometimes even financially: The events business, which will present about 30 live events this year, is now one of the primary sources of revenue.

(While other publications, such as The New Yorker, produce live events, those are usually brand-building exercises rather than major sources of revenue.)

The Walrus Foundation, the education-oriented charitable non-profit that publishes the magazine, procures corporate sponsorship, such as the one from RBC for an evening dedicated to conversation about philanthropy.

In return, RBC receives a page in the magazine. The bank also, by virtue of the foundation's charitable status, receives a nice tax benefit.

"We don't have an advertising department anymore, we have a sales department, and half of what looks like advertising is actually a recognition page for a corporate sponsor or partner of another activity," says Shelley Ambrose, the magazine's co-publisher and the executive director of The Walrus Foundation.

This year, the foundation will earn about $1.3-million from its events business, Ambrose says. Much of that is profit: She says Walrus does not pay writers to appear. (They also do not pay the interns who work in the magazine's offices for six-month stints, nor do they pay most of their bloggers.)

"They love The Walrus, they like The Walrus community, they understand that whatever it is they're talking about, they want to reach our audience," she says.

"And because they actually think it's great to be able to say to a volunteer board that they sit on – say, the Princess Margaret Hospital, or the Run for the Cure – to be able to say, 'Hey, I have $10,000 worth of advertising in The Walrus I can donate.' They think that's pretty cool."

Ambrose pegs the annual budget of the foundation at $4.8-million, only about one-third of which comes from subscribers and newsstand sales. Individual donors, foundations and government grants contribute another one-third; events and other corporate sponsorship makes up the last one-third.

Still, if it has tamed the most threatening beasts on the business side of its operations, The Walrus continues to face many of the same doubts it always has about the magazine itself.

On one hand, it consistently wins the most gold awards at Canada's annual National Magazine Awards (though this year it came third, after The Grid and L'actualité).

The 10th-anniversary issue is a worthy collection that includes the bylines of Andrew Coyne (on our dysfunctional Parliament), Mellissa Fung (on Afghanistan), Michael Harris (on digital sex), Ron Graham (on Stephen Harper), and Katrina Onstad (on "a typical 10-year-old Canadian girl").

On the other hand, for a publication that considers itself Canada's answer to Harper's, The Atlantic Monthly and The New Yorker, its must-read pieces – the ones that set the classes to chattering – are so rare as to be almost non-existent.

Asked to cite a memorable essay that lit up the town, editor and co-publisher John Macfarlane reaches back to Ron Graham's 2009 profile of Michael Ignatieff: "Anybody who was remotely interested in politics was talking about it."

It may be that the comparisons to those U.S. magazines are foolhardy, especially given the differences in scale and demographics between the two markets.

"It's easier to pull off in New York, which has a much more homogeneous [readership]," notes Macfarlane.

Or it may be that any publication that proclaims itself "a general-interest magazine about Canada and its place in the world," is doomed by its own earnestness.

"We're all acutely aware the magazine could be much better than it is if we had more resources than we have, and to be honest, if the magazine had a better editor," says Macfarlane. (At 71, he has now been at the magazine for five years, and regularly speaks about handing it off some day.)

Still, it's in a better place – financially and editorially – than it used to be.

"We now have the luxury of looking forward, which we couldn't have done five years ago," says Macfarlane. "It wasn't at all clear we were going to reach our 10th anniversary. I think we've proven the business model works, and if we continue to do what we're doing, there's no reason we won't celebrate a 20th anniversary." 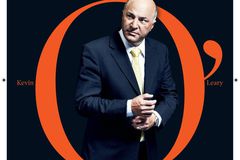 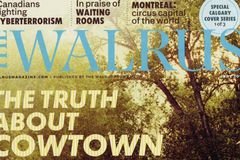