Heather O'Neill's first novel, Lullabies for Little Criminals, famously won Canada Reads in 2007, making it an international bestseller. Her follow-up, The Girl Who Was Saturday Night, is set in her hometown of Montreal and concerns the lives of brother and sister as they attempt to outgrow their eccentric, distinctive family name.

I was lonely. I invented some characters that I thought would keep me company. I wanted to have some fun. They were all the type of people that I loved when I was a teenager. I wanted to write about a group of shipwrecked poets on a deserted island called Montreal.

Jean Rhys. She says so much in a concise tidy sentence. Sometimes they make me want to faint.

When I was little, I grew up with riff-raffs in the kitchen. Or sitting on my dad's lap on a bench filled with riff-raffs. They all gave me consistently terrible advice. For instance, my dad would tell me not to keep a diary because it would be used against me in court.

So I always looked for advice from books. A zebra with a bow tie taught me about manners. A fat bear taught me about sharing. I learned about camaraderie from crows and self-esteem from a goose.

While I was writing my first book, I read The Alchemist by Paulo Coelho to my daughter when she was nine. It gave me great advice about having faith that you are on the right path and just continue moving forward no matter how bleak things seem.

If I had a chance to time travel, I'd always go into the future, not the past. I like progress. But not to be a stick in the mud, I would choose to go back to the early 1970s. I'd love to have been a young woman back then, wearing bell bottoms and huge glasses and partaking in the Woman's Liberation Movement. I'd drive a Ford Cortina with a philosophy book and a copy of Ms in the passenger seat. It would have been amazing to be a photographer then too. Kids and people were still out on the street corners.

Would you rather be successful during your lifetime and then forgotten or legendary after death?

Successful during my lifetime, definitely. I'm a single mom, I have to make some money. I like the little moments of feeling accomplished. I just had a launch at The Rialto for my new book. When the event was over my friends and I all squeezed into a booth at the Nouveau Palais restaurant at midnight and toasted with glasses of gin. Those are so sweet, those moments of taking stock. Much lovelier than immortality.

The Crucible by Arthur Miller. I've always found it creepy and sexist. I once visited Salem with my daughter. The whole town square was devoted to cheap museums about the witch hunt. We spent all our money getting into them and then couldn't afford to go into the Nathaniel Hawthorne's house. So we stood on some boxes and peeked into all the windows to see what it was like. Which was sort of funny if you think about it, like we were the modern-day incarnations of Hester Prynne and her daughter.

Isabel Archer, just so that I could dump Osmond.

I can't think of a question that I haven't been asked. I'm always hoping that there are questions that they won't ask me!

Author Heather O’Neill emerges from The Girl Who Was Saturday Night a fully formed artist
May 16, 2014 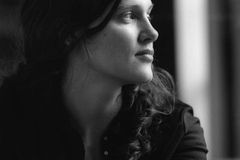