Many modern memoirs are written by exhibitionists and read by voyeurs. How else to account for the genre's popular ascension, commensurate with that of reality television and social media?

It is the moment of the memoir. If before we were sympathetic auditors of Rousseau's Confessions, we're now the insatiable camera lens of Hoarders; and as your Facebook and mine have eloquently demonstrated, we all consider ourselves eligible for exhibition.

In Winter Journal, Paul Auster is both exhibitionist and voyeur. Addressing himself in the second person, "you," the prolific novelist, poet and essayist not only confesses, he judges; he not only creates the spectacle of himself, he seems to revel in it. Rather than positioning the reader as spectator, therefore, Auster creates a shared experience which distinguishes Winter Journal in its overcrowded genre, not unlike one calm and properly tailored man in a teeming crowd of hooligans.

The impetus for Winter Journal, Auster's first effort in memoir since Hand to Mouth (1997), was the author's impending 64th birthday, a milestone that initiates "the winter of your [Auster's] life." It is time to "put aside your stories … and try to examine what it has felt like to live inside this body from the first day you can remember being alive until this one." Winter Journal doesn't pretend to follow this linear mission, however.

The method of Auster's self-catalogue is free association, brief episodes falling like the snow outside his Brooklyn window, forming in collage a portrait of the artist as a young, aging and now old man.

Some of these episodes will remain with the reader, like memories of one's own. A night with a Parisian prostitute, who recites long passages of Baudelaire post-coitus, is inscribed in watercolour: "If everyone in the world could smile as she did … peace and happiness would reign on Earth forever." Auster's tangential meditations are equally enduring, and frequently humorous:

"Passports do not contain pictures of hands and feet. Even you, who have lived inside your body for 64 years now, would probably be unable to recognize your foot in an isolated photograph of that foot."

But the associative method occasionally strays into something like senility. Even the most engaged reader will wonder why Auster devotes one of the longest episodes of the memoir's second half to a narration of the 1950 noir film D.O.A.

With snow all over Brooklyn, Auster is transfixed by thoughts of the dead. Winter Journal is therefore a memoir in the minor key, joining a small club of elegant, unsentimental meditations on dying, with Joan Didion's two recent memoirs being the unsurpassed exemplars. It isn't difficult to understand why Auster is obsessed: He has had an inordinate number of near-death experiences, as if the Reaper has coveted him from the first.

His most recent brush forms one of the memoir's early set pieces. In August, 2002, driving with his wife and daughter, Auster makes a hasty, poorly calculated turn. "You do not see the van as it comes crashing into your car," but we see Auster's dramatic art in crescendo: "The impact is thunderous, convulsive, cataclysmic – an explosion loud enough to end the world. You feel as if Zeus has hurled a lightning bolt at you and your family."

Lightning is Auster's preferred metaphor for death, an association no doubt formed when a friend of his youth was struck and killed by a bolt. The writing of Winter Journal is Auster's lightning rod, a preparation for this final, stormy season. He envies those who die of old age: "Rather than electrocution by lightning bolt, [a slow death provides] a chance to reflect for a while, and then you go to sleep and float off into the land of nothingness."

Perhaps 64 is premature for this auto-obituary; but Auster quotes and follows an adage of Joseph Joubert: "One must die lovable (if one can)."

"If you are not taken suddenly," Auster writes, "you want to be lovable." His memoir certainly is.

Michael LaPointe is a writer and literary journalist in Vancouver. 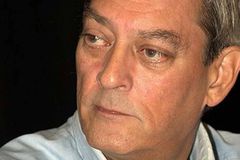