Memory is the only paradise from which we cannot be expelled.

Patti Smith wants you to know she doesn’t drink too much coffee. In the just-published memoir, M Train, Smith’s first book since 2010’s bestselling, award-winning Just Kids, she seems to be having a cup of steaming joe, black, every five or six pages, often in the Café ’Ino, a closet-sized boîte, now defunct, not far from her Greenwich Village digs in New York.

But that’s a misperception, a tea-sipping Smith stressed the other day during an afternoon interview in a downtown Toronto hotel lobby. “In this book, the text spans, like, 2-1/2 years and in that time I drink 45 cups of coffee.” Not enough, in other words, to worry that Smith, who’s 69 in December, is some doomed caffeine-head à la Balzac who, according to legend, downed as many as 50 cups in a day and died at 51. “When I was young, I drank 12 cups a day,” she confessed. “But when you’re young, you have no idea that might not be good for you. When I was in my 40s, my doctor told me I drank too much coffee, so I cut it down from 10 cups to two or three, usually in the morning.”

Also worrying, at least to the reader of M Train, is Smith’s diet. It seems rather, well … skimpy, monochromatic. A breakfast of brown toast and olive oil, anyone? Watermelon juice and brown toast? White-bean soup with brown bread? Cold buckwheat noodles with yam? Yummy.

Again, Smith, her hair now a lank grey, not the shock of jet black of yore, swatted down any concerns. “I love to eat,” she declared while admitting to having “really bad table manners.” 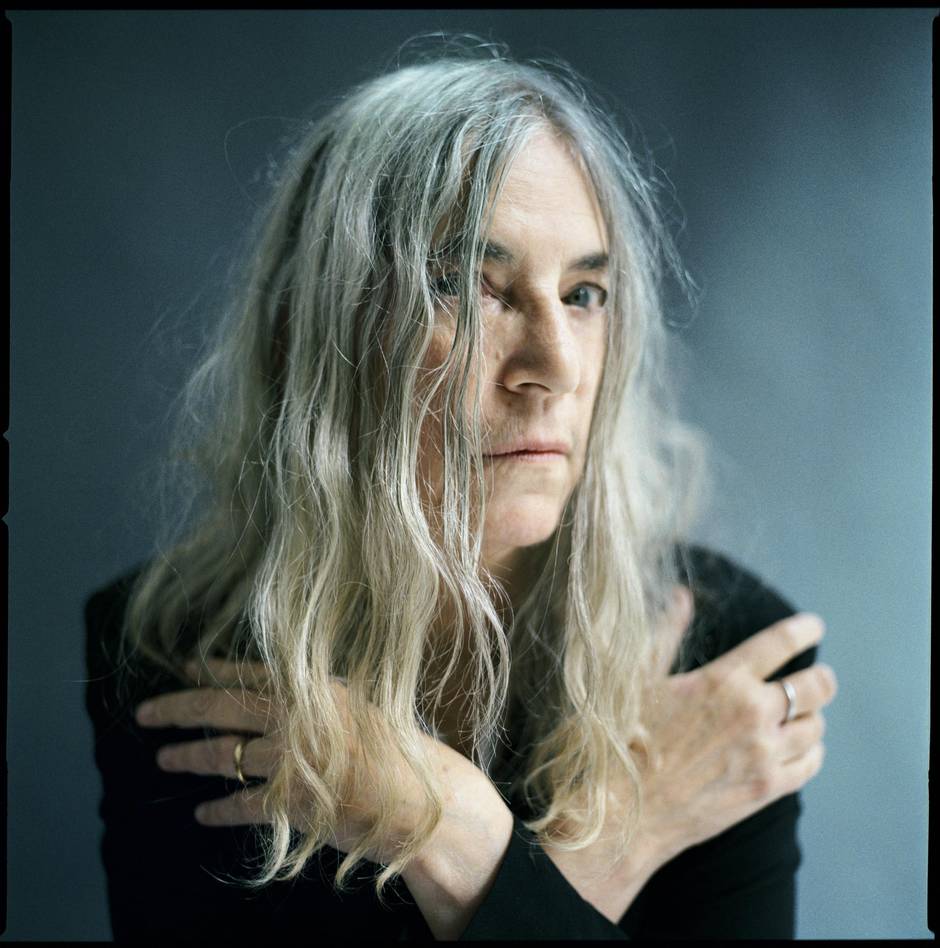 Patti Smith’s M Train is the follow-up to her bestselling memoir, Just Kids. (Christopher Wahl for The Globe and Mail)

“I eat simply and I eat well. I never miss a meal. I eat a lot of vegetables, fish – I’m not a vegetarian – and I eat everything in moderation. When I’m on the road I eat a lot of peanut butter sandwiches. On whole wheat bread. You have to eat well to maintain the work/lifestyle I have because I do work hard.” Indeed, Smith and her band played 45 concerts in Europe this summer, often in sweltering conditions, usually for at least two hours at a stretch, including complete performances of the Horses album that was her first claim to fame in 1975.

Smith now has 12 records to her name, excluding the 2002 quasi-greatest-hits package Land, and plans to return to the studio in the next few months. Yet for all that output, this 2007 inductee into the Rock and Roll Hall of Fame doesn’t consider herself a musician, even as most reference works continue to describe her first as “an American singer-songwriter,” then a poet, memoirist and visual artist. “I came from an upbringing where if I coulda learned to play piano [which Smith, true to her South Jersey upbringing, pronounces pea-anna], I woulda loved that,” she observed. “I hear little melodies in my head and I might walk around singing them. But I don’t have a mathematical nor a musical mind; my mind is really visual and language-oriented. I mean, I love music. I love Wagner, opera, [Maria] Callas. … I listen to Beethoven and Glenn Gould with Rihanna, Jimi Hendrix, Neil Young and Amy Winehouse thrown in. But I think of myself as a performer – that’s something different – because I don’t require music to perform.”

Smith’s artistic career began with her writing poetry. Then, in early 1971, she started to perform her poetry in sundry New York venues, sometimes accompanied by friend/rock critic Lenny Kaye on electric guitar. “And partially because of the zeitgeist and partially because I had huge amounts of natural agitated energy, I got bored with just reading poetry. I got into Jim Morrison, Bob Dylan and this fusion of a poetic language and rock ’n’ roll was very interesting to me.”

Anyone who’s seen Smith onstage or in videos knows she has a cool way with at least holding, say, a guitar or a clarinet. “Yeah, I can improvise on clarinet – but if someone said, ‘Play My Funny Valentine,’ I can’t do that. And on electric guitar, I’m really good at feedback,” due in large part, she said, to the tutelage of “a master teacher,” namely her guitar-hero husband, MC5 co-founder Fred (Sonic) Smith, who died, too soon, in 1994 at 45.

“I still love having an electric guitar in my hands and manipulating feedback, but I couldn’t stand there and play a song on it. But I can make noise, and sometimes,” she laughed, “beautiful noise.”

Fred Smith is a major presence in M Train, although not in the way that the photographer Robert Mapplethorpe, Patti Smith’s first great inamorato, was in Just Kids. That book had a strong narrative spine and the sustained arc of their tragic love story. “With this book, I just wanted my own self,” Smith explained. “It’s more about the interior world than the exterior,” with Smith shuttling from present to past, country to country (French Guiana, Japan, Germany, Iceland, Mexico, Queens’ Rockaway Beach, among others), from dream to waking state to remembrance and back, from gravesite to gravesite. At the start of our interview, I ran down a litany of train titles – Peace Train, Soul Train, Chasin’ the Trane, Blue Train, Midnight Train, Freight Train, Take the Coltrane – “and now we have M Train.”

Smith has become famous over the years for her fierce embrace of the notion of heroic genius and her near-mystical devotion to a quirky pantheon of artists whom she feels embody that state. Often this fealty has resulted in Smith travelling to the often out-of-the-way cemeteries in which they’re buried or the spaces they once inhabited. Thus, in M Train, there are reports of visits to the graves of Arthur Rimbaud, Yukio Mishima, Sylvia Plath, Ryunosuke Akutagawa and others, plus a trek to the Mexico City home of Frida Kahlo and Diego Rivera (where Smith contracts the flu and, to recover, is allowed to sleep in Rivera’s bed).

Smith sees nothing morbid or odd in this. “I enjoy visiting artists and poets that I’ll never meet or have never met, but who have sustained me in my life through their work,” she said. “To go and visit Jean Seberg or Sylvia Plath or Bruce Lee, it could be anybody, it gives me a moment to say a little prayer and to say thank you. Sometimes I’ll take a photograph, but only if I see a photograph. Visiting my mother’s grave, sometimes we’re not totally present; we’re just stopping by to say hello; we don’t feel a whole spiritual connection because you can’t make yourself feel that. And then I can be in the kitchen, drinking coffee and I suddenly look at my hand holding the cup and it reminds me so much of hers or the smell of it makes me think of her.

“A pilgrimage is a nice thing,” she added. “It gives us a destination. If I go to Romania just to see [sculptor Constantin] Brancusi’s Endless Tower, then in doing that, I meet some people. I see some parks. I see the streets he walked. I learn something of Romanian history. … It’s just part of what I like to do in life.” (In our conversation, she expressed a desire to visit the

Although suicides form a large part of Smith’s artistic pantheon, she claimed she’s “never been self-destructive,” nor, as one of her heroes, John Keats, memorably put it in 1819, “half in love with easeful Death.” “I wanna be around for a long time.”

A few years ago, in fact, she told me she’d like to live to 100. “Today,” she said, laughing, “I’m gunning for 92, although 100 would be fine, as long as I can be productive.” Among her future projects: another memoir, a book of poetry, maybe a work for young adults, a detective novel. “I love detectives. They’re obsessive like poets. When they say they’re ‘going after their man,’ it’s like the man is the poem, the punchline of the poem, the gathering of the poem into its whole self. Like poets, they have to unravel all kinds of possibilities until they get their man, they get their punchline.”

Smith, in the meantime, continues to carry the torch for her late husband, with whom she had two children, a son, now 33, and a daughter, 28. One of M Train’s most moving passages has Smith taking a 14-hour flight to Japan and finding herself watching the film Master and Commander twice because Russell Crowe’s physical presence as Captain Jack Aubrey, “his code of honour, his stoicism, reminded me of Fred.”

“Midnight I began to weep,” she writes. “Just come back, I was thinking. You’ve been gone long enough. Just come back. I will stop travelling; I will wash your clothes.”

Back in present-day windy Toronto, Smith remarked: “When you lose somebody, most of the time you’re adult about it. You know that they’re gone from this plane and you find a way to deal with that. But every once in a while – it might happen once every five years – it’s almost like you want to have a temper tantrum and say, ‘Okay’ – it’s like hide-and-seek – ‘Come out, come out! It’s been long enough, this game of being gone has gone on long enough.’”