Jade Brooks was only 11 when she entered the foster-care system in her hometown of Halifax. N.S. Her mom was a functioning alcoholic. Her father was in and out of jail. Her parents beat each other, but never laid a hand on their five children – including Jade, who excelled at school and describes her upbringing as "pretty normal. But then, it was all I knew."

In her new memoir, The Teen Sex Trade: My Story, Brooks recounts how she fell into the sex trade at 17, lured by a boyfriend whom she loved and wanted to please. They fought constantly. He once threw a cellphone in her face and gave her a black eye. Bruises from the neck up were unsightly, so he started choking her.

Still, Brooks stayed – as countless abused women do – and ended up working for him and selling her body in the strip clubs and massage parlours of Montreal and Toronto. Finally, the abusive relationship ran its course. He found another girl to exploit. And Brooks started to pick up the pieces of her life.

Today, she's an advocate for young, vulnerable women and says human trafficking in Canada is insidious, particularly in the bigger centres.

"Most of the population doesn't even know it exists," says the 25-year-old mother of newborn twins. Sex-trafficking victims are young girls, she says. "Just like me."

Her statement is backed up by a 2014 report from the National Task Force on Sex Trafficking of Women and Girls in Canada, which summarized sex trafficking in Canada as "an issue that too many people know too little about."

The task force found 93 per cent of trafficking victims in this country are Canadian and they are often preyed upon by people they know and trust, such as boyfriends or relatives. A Statistics Canada report in 2014 found at least one-quarter of females trafficked are under the age of 18, with anecdotal evidence showing some are as young as 12. The total number of victims is hard to quantify because only a small fraction of trafficking crimes are uncovered or reported.

Now, based in Calgary, Brooks says she doesn't regret the past, adding it shaped her into the empathetic individual she is today. "At first, I had so much anger, but I've found peace by surrounding myself with healthy people. I've got two babies to love and protect. I won't let happen to them what happened to me."

Your childhood sounds traumatic. What was it like growing up poor in Halifax's black neighbourhoods?

Growing up, I would describe my life as normal. Not that it was normal [to a person on the outside] but I perceived it to be normal because it's all I knew. There was the good and there was the bad. I didn't like the bad and I had confusing thoughts about the relationship between my parents. But I didn't know that other families were different in that their parents didn't fight. I thought that was just the way it was until I was removed from my home with my mom. I know that sounds confusing, but you have to understand that the life I was subjected to – as dysfunctional as it was – was my only reality, so to call it abnormal wouldn't make sense.

Do you blame your parents for messing up your life?

Although my parents played a role in creating the environment that put me into foster care and eventually led to my being vulnerable enough to be coerced into the sex trade, I don't place the blame solely on them because I understand the generational trauma and systemic barriers that cause someone to be unable to care for themselves in a healthy way. When you don't take care of yourself, it trickles down to your children almost automatically.

How did you meet your boyfriend who pimped you out eventually?

We were introduced through a mutual friend. At first it was great, but it changed when he began to be verbally and emotionally abusive, some time during the first year [she was 16]. The first time he hit me was with the phone. He realized that was a big deal [because people could see what he'd done] and he started to do other things, like choking, that produced the same amount of terror. It was the typical domestic-abuse situation where you believe you're the reason this is happening. I went along with his plans because I loved him and was seeking the stability/life that he promised I would have if I did what he was telling me to do.

Your friends and family were telling you he was bad news. Why didn't you listen?

We broke up constantly. But we always came back together. I believe that my becoming involved with an exploitative person was inevitable based on my vulnerabilities. The law of attraction makes a person with my background/history run into people like him. At the same time, the onus is on him because he saw an opportunity to exploit me and he chose to take that opportunity. It wasn't my fault that I was vulnerable and lacking the awareness of where those vulnerabilities could lead me. In this case, it led me into the arms of a pimp.

How did you prepare yourself mentally to have sex with strangers?

Sex wasn't new to me when I began doing it for money. Mentally, I had to distract myself by either trying not to think about anything at all, or reminding myself of the end goal, which was to live a happy life with my boyfriend, where we were financially stable. That was my motivation, not the money itself. The figures never mattered to me.

Were you ever afraid for your life?

The most dangerous time was near the beginning of working in the massage parlours. I had to do an "out call" (meaning going to a client's home as opposed to providing service at the parlour) in Toronto. It was particularly dangerous because I was new to the city and I had no idea where I was going once I got into the taxi with the client. Anything could have happened. Nobody knew where I was. I don't even think the parlour owner knew where I was going, even though she set it up.

Why did you stay with your boyfriend?

I thought that all the bad things that were happening was the sacrifice I had to make to keep this person in my life. I didn't leave because I was in love with him. I would have done anything for him, given my life if I had to. He was the only thing I had, really, as bad as that sounds to people on the outside. I wasn't that connected to my own family and he was the most consistent person in my life, even though it wasn't remotely in a positive or healthy way. I stayed because there were good times, despite the bad ones. And I would remind myself that he had the potential to be good, and he would be that person, after all was said and done with the lifestyle we were living.

The book is very raw in its language and graphic in physical descriptions. Was it hard to relive the trauma?

The writing process was definitely cathartic. It was emotionally exhausting and confusing at times. I would say it was a trauma within itself because I didn't understand a lot of what happened until I wrote it down and was able to see it for myself. Sort of from a bird's eye view of how bad it really was. Probably the hardest part was stopping myself from comparing my experiences to other girls. Telling myself it wasn't that bad and someone else had it worse. But there's no comparison when it comes to exploitation, abuse and trauma. Each experience is its own.

You're already writing a follow-up book to The Teen Sex Trade to explain how you were able to overcome your circumstances. Why is the act of writing – and telling your story – so important to you?

I want young women, specifically, but all those affected to be able to read this and recognize an exploitative situation before they're pulled too deeply into it. This is an individual problem but a societal one. I want communities to start discussing the issue of human trafficking and really understand, as a collective, its roots and the damaging effects it has on its members so that they can stop it before it starts.

Do you still have a lot of anger?

It was there initially, but I've worked on that. I've found peace in myself by trying to help other young women like me. Speaking in the schools and at conferences helps me heal and I want them to know they're not alone. I wouldn't change what happened to me. I have knowledge now that I wouldn't have otherwise. I have a daughter I can teach based on my own experiences, and I have to tools to help her stay away from those kind of people.

What Toronto filmmaker Chandler Levack is listening to, reading and looking forward to
August 30, 2017 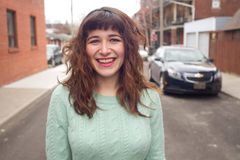 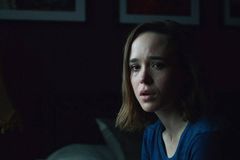 The Room's Greg Sestero reverses his fortunes with The Disaster Artist
August 30, 2017 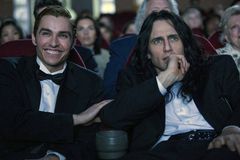