Wanted: person of means, with plenty of sturdy shelving, likes to be read to by literary titans. Must own turntable, and remember how to operate it.

If that's you or someone you know, Toronto writer and collector Greg Gatenby is standing by to hear from you. The former director of the Harbourfront Reading Series is selling what he's calling the largest known collection of writers' voices on vinyl, some 1,700 LPs, 45s and 10-inch discs. All of which can be yours on eBay in an auction ending on Sunday. You can start the bidding — as of Tuesday, no one had — at $10,000 (U.S). The Buy-It-Now price is $85,000.

That it's a remarkable trove of literary history is not in question. Whether or not there's a market for it out there — anywhere — is another question entirely.

"So far, only nibbles but no bites," Gatenby was saying earlier this month at his Toronto office where the collection still fills – for now – a seven-story unit of Ikea shelving. Since then, he's had inquiries from several potential American suitors. And: "Lots of calls, predictably, from potential buyers who want to buy only certain authors or certain kinds of authors."

The catalogue of what's here runs to 80 pages, spanning two centuries of literary achievement. You could build an impressive pantheon with the names on these shelves, Auden and Atwood, Camus and Capote, Eliot, Faulkner, Kipling, Shaw and Yeats.

A tabletop strewn with discs nearby suggests the DJ booth at the nerdiest nightclub in history: Here's Pound and Plath, Birney and Purdy and Updike, Forster and Saint-Exupéry, Tolkien narrating The Hobbit, Millers Arthur and Henry – even William Shatner (reading the American science-fiction writer Henry Kuttner, though, rather than any poems of his own).

It's been nearly 10 years now since Gatenby left the job that made his name while helping to put Toronto on the map as a lively hub of literary culture. For almost 30 years, he steered the Harbourfront Reading Series as artistic director, building a modest local program into a robust year-round event that, by 1980, featured the International Festival of Authors, the annual autumn jamboree of readings, interviews and panels that writers and readers continue to give thanks for as it approaches its 34 th edition this October.

Gatenby was always a writer himself, and that's what he returned to in 2003. He has a thriving stable of projects he's shepherding toward publication, including a novel; a third volume in his series exploring how foreign writers have viewed Canada; and an ongoing series of books showcasing vintage postcards. Oh, and then there's the comprehensive (and possibly multi-volumed) cultural study of the origins of the First World War.

All of which ties back into why the time has come for him to sell his vinyl. Other interests have pushed themselves to the fore and, maybe more to the point, need financing. Or as Gatenby puts it: "One of the reasons I need more money: to buy more postcards."

If there's any doubt that Gatenby is a natural-born collector and archivist, you only have to spend an hour in his place of work and voluminous storage, in an old industrial building where they used to build safes, so: strong floors. The books that pack the non-vinyl shelves are mostly military and 19th-century histories, now. He famously sold off most of his literary library – some 40,000 books – in 2004, not long after his tenure at the Reading Series ended. There were questions at the time: Did review copies in the collection belong to him or to the office he'd left, and was it really worth the $2-million he was asking? He won't say what he got, in the end, just that most of the books left the country.

Now, historical postcards fill wall upon wall of his office in ranked white binders in dozens of categories. There are nine in the authors department devoted purely to Goethe, two of them for depictions of his various houses, one just to accommodate postcards of his mistresses.

As for the vinyl, the collection dates to 1980. Browsing the Cs in the stacks of in a used bookstore in New York, he discovered an album featuring the French novelist Colette, which he bought, for $5.

He thought it was an oddity, a one-off. "Even though I'd been at Harbourfront for six or seven years at that point, I'd never run across them. ... And so I thought, oh, there go the French again – that's the kind of thing they do."

Today the collection stands at 1,720. With no trustworthy discography to tell him what's still out there, Gatenby can only guess at what he doesn't have. "My sense would be – including all languages – about 2,500."

The most Gatenby ever paid? "Once I went crazy in L.A. and spent $700," he says. It was a recording of Ayn Rand reading, a private pressing. "It wasn't out of any affection for the author or her work. I knew a rarity when I saw it."

One that got away? "As any collector will tell you, there's no record you desire more than the one you should have bought and haven't seen since," Gatenby says. "That's the first Jack Kerouac recording." He had his chance, in 1985. "Why didn't I buy it? Because it was $300 and that was way past my limit at the time. There are only so many baloney sandwiches you can eat."

If Gatenby can't sell the collection intact, he says he'll break it up into lots. From Washington, he says, the Library of Congress "sort of made an offer"; it wasn't the one he wanted. Otherwise, institutions don't have the money or the mandate. Or, as with Library and Archives Canada, none of the above.

"From the beginning I've been assuming it's going to be somebody of moderate wealth," says Gatenby. His price reflects an estimate of what he paid in cash over the years – without, he says, factoring in the added hours of searching and researching.

"I think if you were Bill Gates," he says, "you couldn't replace this collection now because so many of the records are extinct. You can go online and find Dylan Thomas for two bucks. ... But there are a lot of records here, including private pressings, that I paid over $500 for."

He's feeling okay about the parting that's to come. "It hasn't left me," he says, "with the empty feeling that good friends of mine feared that I might have. I've moved on."

James Joyce Reading Ulysses and Finnegans Wake(Caedmon): "Well, you know or don't you kennet or haven't I told you every telling has a taling and that's the he and the she of it," Joyce lilts. He was an accomplished opera singer in his day, a tenor, but he's in slighter voice here, with almost a wheedling cadence to the reading of Finnegans Wake, which he performed in 1929. Though he does sound, it has to be said, singularly happy, too. Joyce was in London to consult an ophthalmologist about his failing eyesight when he was persuaded to read for this 1929 record. A text was prepared with enlarged lettering, but the lighting in the studio was bad, and a prompter had to whisper to him throughout.

La Voz de Gabriel Garcia Marquez(Colecciones HJCK): A recording made in 1968, a year after Marquez published his opus, Cien Anos de Soledad, (from which he reads lushly, here) and 14 years from his 1982 Nobel Prize for Literature.

Lolita And Poems Read By Vladimir Nabokov(Spoken Arts): Never mind the provocative cartoon on the cover – this is, after all, Lolita. Notable here is Nabokov's accent, which is very clear, very measured, very Inspector Clouseau. He learned his English, says the jacket copy, from governesses, growing up.

Ernest Hemingway Reading (Caedmon TC 1185): Side 1 starts with a jolt that seems to demand capital letters: "THIS IS ERNEST HEMINGWAY." Anyone foolish enough to argue with that fully deserves the fist in the face that Hemingway sounds like he's about to reach up and deliver at any moment. Say what you like about the play he's reading from here – the only one he wrote, The Fifth Column – there's no denying that he holds your attention.

James Joyce Society Presents Brendan Behan On Joyce At The Gotham Book Mart (Folkways): "The nice thing about this," Greg Gatenby says, "is they got Behan when he was sober." A lovely, shambolic performance the Irish poet and playwright gives in 1962 to a small audience in New York, on the subject of one of Joyce's sisters, "a very elegant, very arrogant woman," to whom Behan delivered milk as a boy. 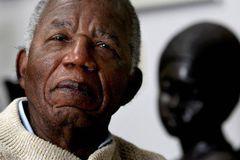 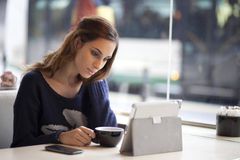 How author Naomi Alderman messed with the New Testament
March 11, 2013 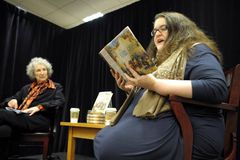