A year after controversially giving the Nobel Prize in literature to Bob Dylan, the Swedish Academy has returned to traditional literary turf, bestowing the 2017 award on Kazuo Ishiguro.

Best known for the novels The Remains of the Day (1989) and Never Let Me Go (2005), Ishiguro is a familiar presence on bestseller charts and award shortlists alike. But he is also a peculiar writer; his work has an idiosyncratic, uncanny quality that often thwarts expectation. For those of us who cherish this uniqueness, the Nobel recognition comes as a thrilling surprise.

Born in Nagasaki in 1954, Ishiguro moved with his family to England as a young child. Often the only visibly foreign child in his school, he was raised on the premise that he might return to Japan; relatives mailed educational literature from the homeland. But he stayed in England. It's little wonder that a haunting sense of dislocation permeates his work.

In some aspects, his first two novels were thematic dress rehearsals for The Remains of the Day, albeit in different costume. His debut, the ghostly, unsettling A Pale View of Hills (1982), is about a woman who moves from Japan to England, where her daughter commits suicide. In his second, An Artist of the Floating World (1986), an aging artist recounts his work as an Imperial propagandist in prewar Japan. After the war, he is branded a traitor and finishes his life in disgrace, his talent expended on a misguided cause.

The Remains of the Day elevated Ishiguro to international stardom. Awarded the Booker Prize and adapted into a Merchant Ivory film, it tells the story of Mr. Stevens, an emotionally repressed English butler. Devoted to a code of unwavering service, Stevens stands loyally by as his master falls under the sway of prewar Nazi propaganda. Along the way, Stevens loses his one chance at love; when regret finally breaks through his stoicism, the impact on the reader, as on the butler, is heartbreaking.

Remains was a mainstream success, but in its wake, Ishiguro started to explore the weirder nooks of his thematic interests. An eager public waited five years before it was rewarded with The Unconsoled (1995), 500-plus pages of meandering, dreamlike narration about a pianist trying to prepare for a concert. Critic James Wood claimed that the book "invented its own category of badness," but some readers, myself included, embraced this bold oddity. Imbued with the bewildering anti-logic of nightmare, The Unconsoled is a distillation of Ishiguro's most distinctive qualities.

Five years later, Ishiguro unveiled When We Were Orphans (2000), in which a daft sleuth with a magnifying glass heads to war-torn Shanghai in 1937, only to have his naiveté dashed against real-world horror. Orphans met with some tepid reviews – including one from the author himself, who admitted, "It's not my best book" – but the intrigue is kept on simmer throughout, and the ending is powerful. An under-appreciated element of Ishiguro's work is his humour – it's there, subtle though it may be – and the depiction of the bungling would-be investigator is very funny, even as it turns tragic.

Another half-decade later, Never Let Me Go arrived. Set in an English boarding school in an alternative version of the 1990s, this poignant quasi-science fiction tale depicts young adults who have been cloned in order to serve as organ donors, giving themselves away piece by piece until it kills them. It's a degree of service Mr. Stevens could only dream of. Never Let Me Go was a beloved hit and a critical success, with a Booker nomination and a pretty good movie adaptation to boot.

It was a full decade before Ishiguro's most recent novel appeared (a 2009 short story collection intervened). In The Buried Giant (2015), an elderly married couple voyages across an ancient England populated by dragons, wizards and knights. Despite the radical shift in milieu, the story is classic Ishiguro, with characters plagued by malleable memory and identity.

Reacting to his Nobel win, Ishiguro told the BBC that "I'll be deeply moved if I could in some way be part of some sort of climate this year in contributing to some sort of positive atmosphere at a very uncertain time." (His spontaneous overuse of qualifiers like "some sort of" is amusingly characteristic; it's not hard to imagine Mr. Stevens sounding like this if he were handed a butler award.) I think Ishiguro's fiction does indeed have an important role in this dire climate. Its messages tend to be subtle; Ishiguro is no polemicist. But at least one valuable instruction arises from his work: We must heed the lesson of Mr. Stevens and the artist of the floating world; we must ensure that our talents and our best years are not sold into the service of regression and destruction. That's a timely warning, and a worthy one on which to train the Nobel spotlight.

Peter Norman is the author of Emberton and the poetry collections At the Gates of the Theme Park, Water Damage and The Gun That Starts the Race. 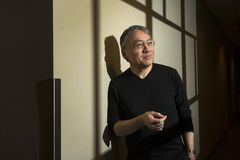 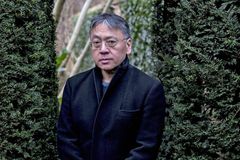