Being a writer herself, and married to no less a figure than international fiction star Michael Ondaatje, Linda Spalding should know. But her answer quickly spins into a tale about her surprise at first arriving in Toronto from Hawaii 30 years ago on the arm of her second husband, two daughters in tow.

The transition wasn't quite as shocking as Spalding's earlier, Dorothy-like migration from her native Kansas to Hawaii, home of her first husband. That trip "blew my mind completely," she says in the parlance of the day. "Everybody was barefooted. It was fantastic."

Toronto, by contrast, surprised her with the kind of literary scene she had never experienced. "The idea of giving readings and stuff was strange to me," she says.

Yes, but what was it like to be known here mainly as an ever-marginal "wife of," your own literary accomplishments as obscure as hubby's were celebrated?

"I've sort of gotten over all that," she says, finally, admitting to the inevitable feelings in denying them. There have been moments. There are still. "But I just have to pay attention to my own kind of work and get over all that, I think."

The task has been eased considerably by the publication of The Purchase, Spalding's first novel in more than a decade, which has emerged as a surprise hit of the fall literary season. Nominated for both a Governor-General's Literary Award and the Rogers Writers' Trust Fiction Prize, it is an engrossing historical melodrama that reads like an HBO miniseries stuffed artfully between the covers of a single book. And it is very much Spalding's own, the basic moral struggle at its core the buried mystery of her own family history.

The path that led Spalding to a story about a hard-luck pioneer family succumbing to fate in the Appalachian Mountains 200 years ago began in her own youth, when her idolized older brother invited her to a meeting of the local Quaker congregation. Much to the chagrin of their irascible father, they became converts, "wearing these big peace buttons." Spalding was "besotted" with the pacifist philosophy of the Friends.

"And then I found out that our family had been Quaker when we originally came to North America," she says. But she already knew that they had also been slave owners. "And I thought, 'Wait a second, that doesn't make sense. It just doesn't make sense.' "

Quakers were the earliest, most fervent abolitionists in the young United States, according to Spalding. "You couldn't be a Quaker and have a slave, so it was a pretty outrageous thing to do," she says. "And I was very interested to know how that could have happened."

What she discovered was a widowed ancestor, Daniel Dickenson, heading west from Brandywine, Pa., with five young children – and a new wife whose Methodist religion had almost certainly inspired the family's expulsion from the Quaker fold – in the footsteps of Daniel Boone.

"Everything after that is fiction," Spalding says. The Purchase is the story of "a good man, but not a particularly wise man," whose betrayal of his own principles blights the lives of his entire family, along with their deeply suffering slaves.

"It addresses the question of what happens when you disregard your own beliefs and convictions and do something that you yourself can't bear, which I think most of us do at some point or another in our lives," Spalding says. "In this case, everything falls apart as a result of that."

As an avowed lover of facts and author of two books of non-fiction, Spalding situates the moral drama within a deeply researched, richly detailed and very rough frontier. But the historical details never get in the way of the emotional drama. What happens to her slave-driving Quakers, she says, "is what happens to people in every generation, in every country. That's just what human life is about – if you have any temptations or challenges at all, which most of us do."

For now, Linda Spalding's greatest temptation is to believe in her own success – as exemplified by two major award nominations and growing buzz about The Purchase. "It's surprising as hell, I have to say," she confesses. "I mean, I'm pretty used to not being in that league – and I won't be for long. It's probably a five-minute run of fun."

But fun it is, she agrees. In that five minutes, she has already permanently outpaced the domestic shadow that dimmed her career until now. 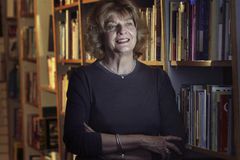