When Hilary Mantel was 6, her favourite game was called "Men." That is, she and a girlfriend, tucked away in a village school in the north of England, pretended to be two blokes named Bill and Jack. For most of her childhood, Mantel waited patiently to turn into a boy, her true fate. Then she would become a knight, or possibly a railway man.

You could argue that Mantel's two most recent novels have allowed her to continue playing Men. Or, in this case, one singular man: Thomas Cromwell, Henry VIII's hatchet man and consigliere, the rationalist and reformer who had been reduced to pantomime villain in Tudor histories until Mantel, in a supreme act of imagination, thought her way into his cool, observant, pragmatic brain.

The first of the novels, Wolf Hall, won the Booker Prize in 2009 and became an unlikely hit for a work of literary fiction, selling more than 1.5-million copies worldwide. It created such a buzz that any reviewer who wanted to read an advance copy of the new Cromwell novel, Bring Up the Bodies, had to sign a non-disclosure agreement first, a restriction usually reserved for Hollywood blockbusters. (Spoiler alert: Anne Boleyn dies in the end.)

Mantel, 59, got over wanting to be a boy and now lives with husband Gerald McEwen here in Budleigh Salterton, a tiny Devon town so quaint it actually has a tea shop called The Cosy Teapot. She sits in her top-floor flat overlooking the sea – the flat Cromwell bought her, if you like – and turns her head every time the phone rings with another interview request, which is often.

"Everything that has happened since the publication of Wolf Hall has astonished me," she says.

She could never have dreamed of this when she was toiling away in the salt mines of literary fiction, producing novels that received glowing reviews but only a modest readership. Leaning forward, she whispers, "It just goes to show, you can't go wrong with Henry VIII."

After a lifetime of struggle that would have knocked most people to the curb, she is enjoying well-deserved success with a story that arrived in her imagination like a gift.

"One day I'd just got these words in my head: 'So now get up.' And I realized those words could be heard right at the beginning and right at the end of Cromwell's life, if you know what I mean." Of course: Cromwell's end came in 1540, after a sudden falling-out with the king, at the hands of an inept executioner. "So now get up," is the opening sentence in Wolf Hall, as the boy Thomas is beaten by his drunken blacksmith father. After she wrote those words, everything flowed: "The story just unrolled like a movie. I'd never had a book arrive quite so visually."

As a schoolgirl in the north of England, one who was particularly sensitive to the supernatural world, Mantel had known little about Cromwell, apart from the famous bits about his role in the dissolution of the monasteries and engineering the King's marriage to Anne Boleyn. "I was always interested in Cromwell," she says, "but I knew almost nothing about him, and I suppose that was the point. He was a blank. You knew what he'd done, but nothing about his personality." Tudor history, in general, was given scant attention at Catholic primary school: "I remember someone saying Anne Boleyn had six fingers, and you just thought –" she shrugs her shoulders – "Protestants!"

Mantel's face looks like an emoticon you might use to indicate mischief, with its round, blue eyes and knowing smile. There is something at once very light about her (her laughter, the cream furnishings in her sun-drenched living room) and very dark. Her humour, for example, which arrives around blind corners: In Bring Up the Bodies, she writes that Jane Seymour, soon to supplant Anne in the king's affections, has "a trick of looking at men as if they represent an unpleasant surprise."

In particular, she has the macabre humour of a woman whose ill health once gave her morphine hallucinations of a chain-smoking circus strongman sitting on the edge of her hospital bed. An agonizing and undiagnosed case of endometriosis blighted her twenties and has caused lifelong pain. At 27, Mantel underwent a hysterectomy, which she writes about in her brilliant memoir, Giving Up the Ghost. She was studying law at university (she never practised) when she approached a psychiatrist for treatment. He diagnosed stress, "caused by over-ambition."

"Ah yes," she says now, laughing, "he thought I should go work in a dress shop." Not that so much has changed, she says: "Things have really not got a lot easier for women. The agenda of control has just become less overt. People still have a tremendous struggle in trying to live a women's life and bring up children and go out there and be an actor in a world that is still so much a man's world." She doesn't think she would have been as productive if she'd been able to have children: "I'm a very maternal person, and also a bit of a control freak. What do they say, one child equals two books?"

In the next room, McEwen answers the phone. Once a geologist, he now handles her business affairs. They were divorced once, decades ago, and quickly remarried. Another domestic disturbance: Mantel's father disappeared when she was 11, never to be seen again, and was soon replaced by a stepfather. For a woman who's had a library's worth of upheaval in her life, she has made the interesting choice to steer clear of autobiographical fiction. Her novels are either historical ( A Place of Greater Safety, The Giant, O'Brien) or dark contemporary satire ( Beyond Black, about a pair of haunted psychics in suburban Britain).

Now she's returned to the past, to put more flesh on the historical skeleton of Cromwell: Bring up the Bodies concentrates on the nine months of Anne Boleyn's downfall. At the end of the year, she'll begin work on the final novel in the trilogy, The Mirror and the Light.

Mantel's Cromwell is the king's instrument, canny and brutal when he needs to be, but also a man who knows that England could pay for its roads and harbours "if we levied a tax on the rich." Does she think she can rehabilitate his image? "Well," she says, with that mischievous smile, "Richard III has been rehabilitated, everyone thinks he's wonderful now." She looks out the window toward the sea. "You hope you've kept some spark of the original, but you don't have to get hung up on which representation embodies the truth, because none of them do. The person is lost." 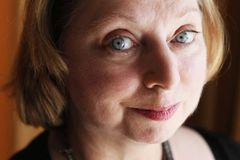