Every Saturday in August, Globe Books will preview some of the fall's most anticipated books. Our summer fiction series continues with Anakana Schofield's novel, Martin John.

It's why he calls into Euston on his way to work. Or, first thing every morning, if he's not working, he'll cross to the newsagents on Tower Bridge Road. The Irish Times he gathers each day at Euston, except Sunday, and a second British broadsheet, the choice of which he rotates, based on the headlines or the pictures of the columnists. There are a few frumpies he has no time for. There are photos and headlines and certain words that worry Martin John and he will not buy what worries him, because his mother has warned him not to.

He never buys a newspaper if he notices a headline has petrol in it. Or pervert. He's not keen on P words.

The first page he reads is the letters page to see did any of his letters get through?
In John Menzies at Euston, amid the wefty drift of chips and cooking croissants from next door, he takes thoughtful time to select exactly the newspaper he wants, unhurried by the arms reaching around to grab the pink and flush Financial Times, or those who fold the newspaper abruptly. Stare.

The second thing he checks: the crossword clues. If they're terrible – determined by reading 3 across and only 2 of the down (they're always weaker on the down), then he chooses a different paper. The newspaper determines many things in Martin John's daily life.

You'll only depress yourself his mother has warned him. This country is gone to the dogs. It's beyond the dogs, there's not even the brick of a dog track left. Sure they've lifted the dirt from under our feet.

She never says specifically what's wrong with the country, only offers the hint of cut-price airfares and suited-up Bucket-Air-gobshites and the price and rush of everyone. She blames it all on a man called Tony.

At least the dogs have a number on them. It's more than can be said for the humans creeping their way about and giving no hint to whatever they're hatching. They'd never give you that bit of information about themselves them fellas. You'd have to take their number.

She may be right about the dogs, but she's lost the way with Martin John. She birthed him, raised him to obedience but never forgave the times he disobeyed.
Keep your hands to yourself and you'll know well where they are.
He did not keep his hands to himself.

He phones her every Sunday, in the phone box, outside Waterloo Station. Most of the weekly events in Martin John's life take place outside or inside train stations. It's always raining when he phones and she can hear it. His money's religiously running out, but she never offers to phone him back. Not at all, it'd only upset him, be an insult to the man. Martin John is a proud son. Hold on, he'll say, 'til I put another fifty pence in. She raised her son proud and she won't upset him. She will not.

She's always been wrong about Martin John, it's why the phone calls surprised her. Today she's wrong about Martin John: he's not buying the paper to study the news. It couldn't possibly depress him any further, it has much more serious input than that. He's dependent on it. Directed by it. He cannot calculate the depressive and improbable nature of mankind without it. For if he were to stop reading and thinking and wondering, then there'd be little reason to walk the streets at all. The newspaper is the only thing that cements his arrival at work each day or the raising of his head off the pillow.
That need to go and buy it keeps him buoyed. Keeps him from the situations. Mam said only a structured daily life would achieve this. He's keen to avoid the situations, a lot of trouble they caused and "shaming" for his mam. She doesn't like it when he calls her from the hospital phone. Not at all.
Keep yourself on the outside, Martin John.

What are you doing in that place? What has you in there at all? Tell me what is happening, Martin John? And the only rabble that would come back from him down the line was that old religious rabble. A rabble she didn't raise him to, she'd insist.
I didn't raise you to be saying this. Put that phone down right now. Phone me back when you've sense to make. But as soon as he'd go to replace the receiver she'd shriek at him in a vocal register akin to a buzzard's.
If you dare put down this phone on me Martin John as God is my judge I won't be forgiven for what I'll do. Come here to me and heed my words and if you don't I'll tell those fellas to lock you up. D'ya hear now?

He heard, he never failed to hear, the bellow of incarceration and he was certain the paper, the walks, the guarding, every miserable minute of it was preferable to incarceration.

Martin John has a personal relationship with several journalists writing in the paper. The capital letter of the first and surnames he imprints to a shortened form, so Caitlin Boylan would be CB, or Barry Hutchinson is BH and Phil O'Toole is POT. During one situation he thought he and BH were having tea together, so he's a bit wary of him since, doesn't read his words too closely, lest they set him off again. He subsequently discovered BH had nothing to say. BH has gone away off to some hot place in Afghanistan the last few weeks, so it's easy avoid him on the page. He was in China too for a while. There's another strident Madam in the paper, Anna-something, who bothers him. She's lovely hair, rides a bicycle, but complains non-stop and is ferocious over the fellas. Wants them expelled out of Ireland, the way that other writer (whose name he never says aloud) desires a cull on women. The two of them should be married and diminish the population, he thinks.

This is the kind of chuckle and sustenance the papers give him – and words, he receives his daily words, sometimes they take him to the dictionary. He tallies up the number of words that commence with a chosen letter each day and records them in a line. At work he has a big dictionary hidden in the drawer. The other guard has a stack of filthy magazines that live under Martin John's dictionary. He's to use a handkerchief to lift his dictionary up and carefully replace the top magazine upside down, so the photos don't set him off.
Careful, careful, careful.
Carefully does it, Martin John, the way mam has trained him.

Caitlin might call him MJ if they were ever on speaking terms. He doesn't think much of her harping on about her boyfriend trouble and her wine glasses and her dining-room table. But he has a file on her.

He's a file on all of them.
The majority of his files though are on the Eurovision Song Contest.
He has traced the ancestry of their names and he can see certainly a pattern in the (kinds of) people who put words on the newspaper page. He'd like to put a stop to it, but he accepts he can't control everything.

Anakana Schofield is the author of Malarky, which won the 2012 Amazon.ca First Novel Award. Her new novel, Martin John, will be published Sept. 15. She lives in Vancouver. 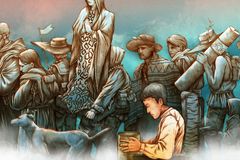