The otherwise conventional biography posted on author M. (Moyez) G. Vassanji's website says that, "if pressed," the author identifies himself as "African-Asian-Canadian." But, it adds, "attempts to pigeonhole him along communal [religious] or other lines ... he considers narrow-minded, malicious and oppressive."

Such an emphatic declaration could easily confuse readers of Vassanji's latest novel, which follows an alienated "African-Asian- Canadian" professional as he revisits his native Tanzania in search of the communal identity he has lost. No pigeonholes limit the 305-page result, titled The Magic of Saida. But as this and indeed all of Vassanji's six previous novels show, intrusive questions of identity are not so easily shrugged off.

Born in Kenya and raised in Tanzania among a long-established community of Gujarati Indians, Vassanji has been dodging pigeonholes ever since he came to Canada, via the Massachusetts Institute of Technology, to work as a nuclear physicist in Chalk River, Ont. The first, widely used in Canada 30 years ago, was "Paki." Even today, having morphed from immigrant scientist into one of most recognized literary figures in the most multicultural nation, he fights against the misnomers.

"You have people saying, 'Oh, he's an African writer,' or 'He's a Tanzanian writer,' or an Asian writer or a Muslim writer," Vassanji complains. "But I don't consider myself Muslim or Hindu or anything else."

"You don't call Margaret Atwood a Christian writer," he adds. "I mean, how stupid is that?"

Literary colleagues may celebrate the rise of what they call "immigrant literature" – and point to Vassanji, two-time winner of the Giller Prize – as its exemplar. But not the author in question. "I dislike that term totally," he says. "I mean, does the fiction immigrate?"

And will he never outgrow the label himself?

But as Vassanji well knows, even the most thoroughly naturalized and long-established "new Canadians" can't help looking back at some point. The hero of The Magic of Saida, Edmonton doctor Kamal Punja, is typical of many people who came from Africa in his generation, according to Vassanji. With children grown and finances secure, they "feel the tug of loose ends and things left behind."

For Kamal, that tug is the memory of a girl, Saida, he loved as a child growing up in the ancient slave-trading port of Kilwa on the "Swahili coast" south of Zanzibar. Searching for her almost half a century after fate swept him away from his storied birthplace and into the modern world, Kamal plunges deep – perhaps too deep – into the rich mulch of an all-but-lost culture opposite in every way to the brisk modernity of Western Canada.

It is a trip Vassanji himself has taken, albeit with a more conscious goal: to give back to the land of his birth by telling its stories. They are stories of the late 19th-century German occupation of East Africa, as recorded in the verses of the washairi, the traditional Swahili poets to whom Vassanji dedicated his book; the origin stories of Africa's Indian communities, now dispersed throughout the globe; the stories of slaves, saints, rebels and drifters whose lives and loves have all but disappeared from human memory.

"My argument is that if you don't tell your stories, nobody else is going to tell them," Vassanji says. Or worse, they will tell them for you – in ways that efface the culture they stand on.

Educated in English in Dar es Salaam, Vassanji remembers every detail of British geography. "But we didn't even know the names of the flowers that grew in our own gardens," he says. "That's what colonialism does."

It's too late to blame the British, he adds, and in any case their former subjects are also guilty of not valuing their own cultures. "So that relearning and rewriting is I guess what we have to do."

Vassanji includes himself among those who knew scandalously little about his homeland while visiting and reading to research the novel. But top of that list for him is Nobel laureate V.S. Naipaul, whose A Bend in the River is celebrated as the quintessential novel of the Indian experience in East Africa.

"He's a great writer," Vassanji allows. "But he doesn't know what he is talking about."

Figures as isolated culturally and spiritually as Naipaul's hero Salim do not exist among the densely connected Indian communities of East Africa, according to the man who was born amid them. "His Indian is just like someone from the Caribbean, almost from nowhere," Vassanji says.

The one author Vassanji is keen to credit for his inspiration is Joseph Conrad, whose Heart of Darkness Naipaul claimed to have bettered with his own African novel. The Magic of Saida employs a Marlow-like narrator to help tell Kamal's story, and its characters include a displaced Englishman Vassanji describes as "a kind of parody of a Conrad character." In fact, he says, he was reading Conrad's Lord Jim "very consciously" as he wrote his own novel.

Like Conrad, Vassanji is a writer whose identity was displaced and transformed by empire, who came to writing later in life, composed his work in a language foreign to his birth and chronicled the in-between lives of global citizens who seemed to belong nowhere.

Unlike Conrad, Vassanji has gone home again. "This is home," he says, meaning Toronto. "I have a house, I mow my lawn, I clear my snow. I have two boys who were born here."

But home is no pigeonhole. "There is the home of the spirit, the home of history," he says. "It's a complex thing."

And surely, he adds, "the world is sophisticated enough to know these things." 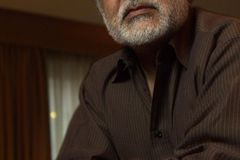 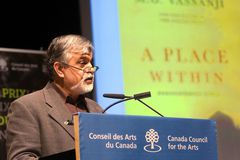 M.G. Vassanji wins non-fiction GG for India memoir
November 17, 2009
Follow us on Twitter @globebooks Opens in a new window
Report an error Editorial code of conduct
Due to technical reasons, we have temporarily removed commenting from our articles. We hope to have this fixed soon. Thank you for your patience. If you are looking to give feedback on our new site, please send it along to feedback@globeandmail.com. If you want to write a letter to the editor, please forward to letters@globeandmail.com.
Comments