The book I'm Thinking of a Number is an illustrated record of the multiples Toronto artist Micah Lexier has made during the 30 years between 1980 and now. But the book is more than that. It's a handsomely designed artwork in its own right, and a testament to the persistence of a certain style of creative play with words and numbers, names and texts that has long had a devoted following among fans of the avant-garde.

Lexier's art is not complicated, and no deep meaning lurks beneath its laconic phrases and gestures. It very simply commemorates the events that stand out with special freshness in the artist's life, especially his collaborations with the writers, printers, designers and others who contributed to the realization of each piece. I talked with Micah Lexier on the sunny deck out back of his apartment on Toronto's Queen Street West.

John Bentley Mays: Looking at three decades of work in I'm Thinking of a Number, what have you learned about yourself and your art?

Micah Lexier: I learned to trust myself. I learned that intuition plays a bigger role in my thinking process that I had imagined. People think of me as an ideas-driven guy, and I am. But there are heavy doses of intuition. Many times along the way, I had a desire to do something that didn't fit in with what I had been doing, and it was right to move with that desire. Now I'm learning to trust those impulses a lot quicker.

I've also learned that I like working with people. There are many forms of collaboration: physically working with someone, using my mother's drawings, inviting a high-school class to contribute an element of the work …

JBM: How was the book made?

ML: Harry Zernike, a photographer from New York, was brought in by Andrew Di Rosa, the designer of the book. Andrew and I had story-boarded out the book as a starting point, so we weren't flailing away, and we figured out the set-ups and scenarios we needed. We put the work in piles, then Harry came in for one week in May of last year, and the three of us worked in my apartment photographing the work very collaboratively. That included bringing in a number of people - curators and other artists, friends and children - to hold my works, wear them, assemble them.

JBM: Why did you photograph your printed and hand-drawn works in the hands of other people?

ML: My things range in size from a business card to a double-sized poster on the wall. So in order to get a sense of how big something is, you need to put it in relation to something else. Sometimes it's a hand, or furniture in my space, a lamp. The idea of having people hold the work also gave me the chance to acknowledge some people, and the role of other people in the making of the work. Photographing them becomes a way of folding them into the work.

JBM: For me, your artworks have often seemed to be traces or marks, like the "Kilroy Was Here" of graffiti since time out of mind. Is your art about mortality?

ML: No, not really. I'm freaked out about dying, just like everybody else, but no more than anyone else. That's an occasion for making the work, not the work itself. It's the difference between the ingredients and the meal, where it's the meal that counts. Interacting with people is more important to me that leaving something behind.

JBM: It must be very exciting for you to see so many of your art objects, done over so many years, gathered into one place

ML: It is. I lived in New York for a long time, and I had some very low moments when people weren't interested in what I was doing, when months and years went by without a studio visit. Then I would take down one of the books that I had made, and look at it, and I was recharged. We go through our lives, and every so often you get to look at your work in a book form and you go, Wow! I made that! It's easy to lose faith in yourself as an artist, so it's really nice to have these moments when you think, Yes! I got a few things right.

John Bentley Mays is an award-winning Toronto writer on contemporary architecture and visual art, and the author of several books. 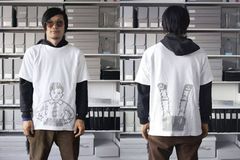