In 2006, British journalist Thomas Harding went to the funeral of his great-uncle Hanns Alexander and discovered a remarkable family secret that had been hidden for 60 years: His prankster uncle had once been a Nazi hunter. Even more shocking, Hanns, a German Jew who'd fled Berlin before the war, had tracked down and captured the commandant of Auschwitz, Rudolf Hoss.

"It was completely amazing to me," said Harding in a phone interview from London. "My uncle was the guy who told us dirty jokes when we were growing up. He stacked the chairs and tables at the synagogue. He never spoke about any of this other stuff. It was totally secret."

For the next six years, Harding researched the lives of Alexander and Hoss, uncovering secrets that two families had tried to keep buried since the Holocaust. The trail of letters, documents and interviews culminated in his compelling new book, Hanns and Rudolf: The True Story of the German Jew Who Caught the Kommandant of Auschwitz.

It is a twisty story told in an unfashionably straightforward narrative. At its heart is the story of two men thrown together in unspeakable circumstances. It's a compelling example of the power of secrecy and silence that rules families, and shapes history.

What surprised – and dismayed – Harding were the parallels he found between his great-uncle and the man who oversaw a concentration camp where more than a million people were murdered. "They read the same children's books. They both loved Germany. Their fathers were in the military. Two men growing up at roughly the same time, in the same country, subject to the same cultural influences, and they ended up in such different places."

Alexander, the son of a wealthy society doctor, was born in Berlin in 1917. Sensing the increasing menace of the Nazis' anti-Semitic laws, his family fled Germany in 1936 and settled in Britain. There, at the outbreak of war, Hanns joined the British Army's Pioneer Corps, a unit that enlisted expatriate Germans to serve the war effort.

Hoss was born to a Catholic family in Bavaria in 1901, sneaked into the German army at the age of 14, and fought in the Middle Eastern theatre in the First World War. He became friends with Martin Bormann, heard Hitler speak, and joined the Nazi Party in 1922. He quickly rose through the ranks, and in 1940 was given the task of building a prison camp in Poland, called Auschwitz. There, he was ordered by Heinrich Himmler to devise an efficient way to carry out the Final Solution. With one of his deputies, he developed the use of Zyklon B gas as a means of extermination, and thus became one of the worst mass murderers in history.

After the war, Hoss and other high-ranking Nazis tried to fade into the German landscape, changing their identities to evade Allied investigators. Hoss became a sailor named Franz Lang, then a gardener. Meanwhile, Alexander volunteered to be one of the first war-crimes investigators and was present at the liberation of Bergen-Belsen concentration camp, an experience that changed him forever.

Fuelled by this anger, and sometimes overriding the orders of his superiors, Alexander became a relentless hunter, threatening neighbours who might be protecting fugitives, arresting their children and once driving across Europe with the body of a dead Nazi strapped to the roof of his car. It was in his character to ignore direct commands; it was in Hoss's to follow them, and, in the end, Hoss fell back on that feeble defence. "I was obeying orders," he would tell a psychiatrist after his capture, adding. "I didn't personally murder anybody."

Alexander brought Hoss to ground in Gottrupel, Germany, in 1945. Hoss denied his identity, insisting he was a lowly gardener, but Alexander saw his wedding ring and ordered Hoss to take it off, promising to cut off his finger if he didn't. Hoss's name was inscribed inside. The Jewish soldiers accompanying Alexander began to beat Hoss with axe handles. After a few moments and a minor internal debate, Alexander pulled them off.

Hoss testified at the Nuremberg war crimes trial, revealing to the world the true horror of the Nazi killing machine. Hoss was hanged at Auschwitz, 100 metres from the house where he lived with his wife, Hedwig, and his five children.

One of Hoss's children, Brigit, agreed to speak to Harding for his book after much persuading. What she said sent him reeling: "She told me that he was the nicest father in the world, that he would read stories and take them on boat rides. His family loved him. There were two sides to him – the father and the commandant." What floored Harding is that, as he searched for a monster, he discovered a man. "What I found is that a single person can be both, and that's frightening," he said. "It could happen again, and that's why we need to be vigilant.''

The other parallel that surprised him was that both families, the hunter's and the war criminal's, had such profound desires to keep the stories secret. Alexander, who spent his postwar years as a banker, never told his immediate family, not even his children, about his heroic past. He was never recognized by the British government for his service, and when the government of Luxembourg tried to give him a knighthood (he had captured Gustav Simon, the hated wartime ruler of Luxembourg), the British failed to tell him about it. The extended Alexander family initially disapproved of Harding writing the book. And the Hoss family, with far greater reason to ignore the past, pretends it has no history prior to 1947.

"Neither family wants to talk about the past, for very good reasons," Harding says. "It's amazing, 70 years later, how alive history still is in all of our lives." 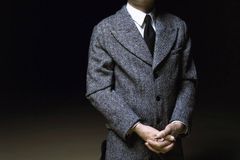