You’ll find Stag Island in the middle of the St. Clair River, smack dab between Canada and the United States. It was developed as a resort in the 1800s, with paddlewheelers ferrying revellers to the Ontario island’s hotels and dance halls, but in 1919, after the tourists disappeared, a group of people bought the island and established a community of about 100 cottages. Chris Hadfield, the Canadian astronaut, has been coming to Stag Island since he was two years old. “It’s been my favourite place on Earth for a long time,” he says. “No better place to go hide.” 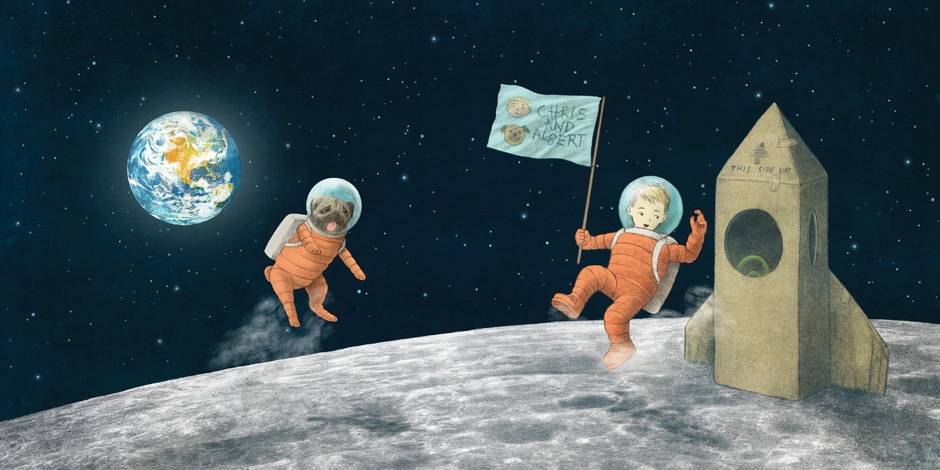 In The Darkest Dark, an aspiring astronaut named Chris overcomes his fear of the dark. (Penguin Random House Canada)

It was there that Hadfield “first dreamed of being an astronaut.” He remembers sitting in front of a small black-and-white TV, at a neighbour’s cottage, on July 20, 1969, watching Neil Armstrong and Buzz Aldrin emerge from the Eagle, the Apollo 11 mission’s lunar module, and hop across the moon’s surface. “It was like science fiction turning into science fact,” he says. Not long after, he recalls “walking out and looking up at the moon, through the leaves, at the same place, and realizing that it’s all the same thing. And that I can maybe be part of that.”

He returns to that night in The Darkest Dark, his first picture book, which arrived in stores this week. 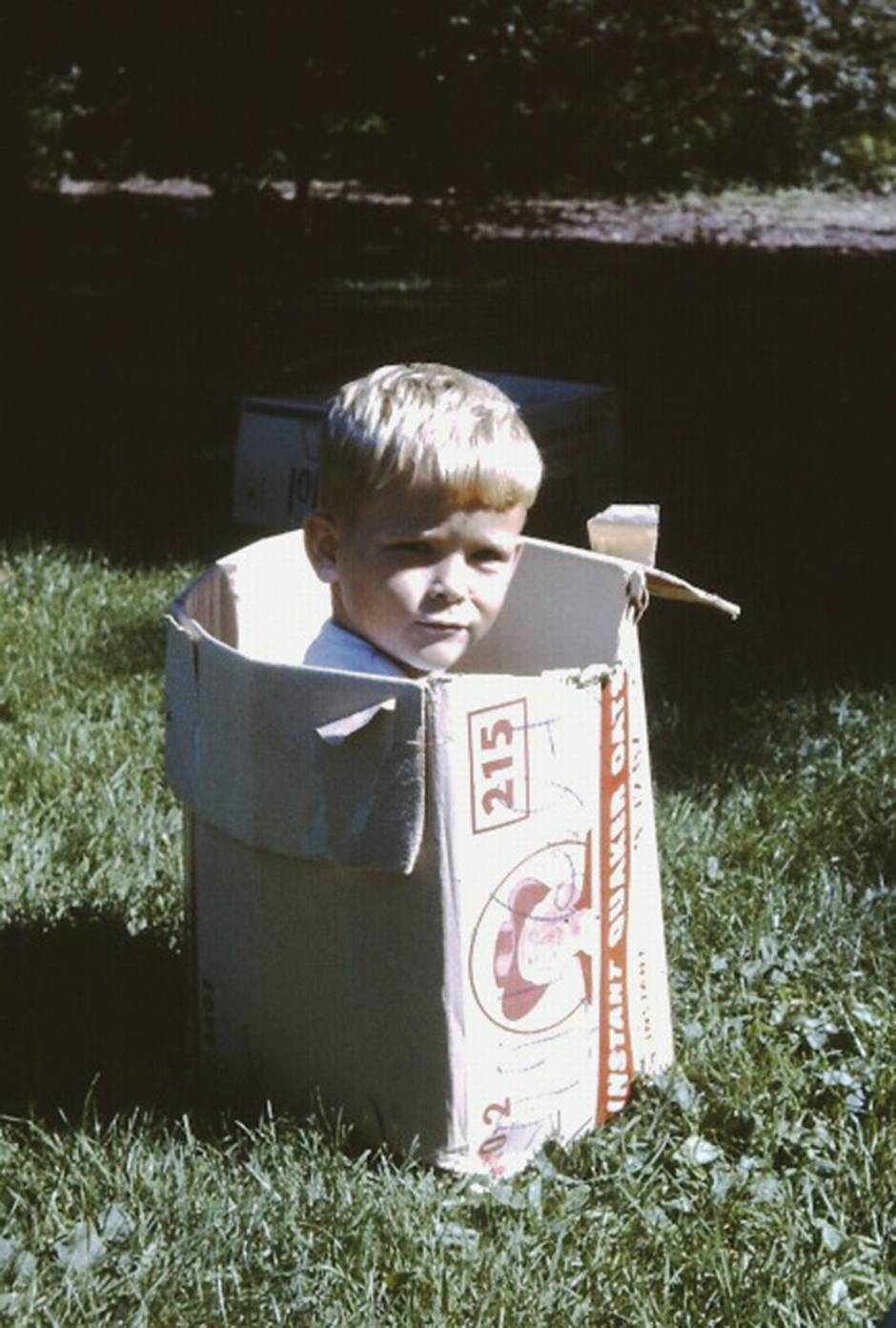 Watching the 1969 Apollo 11 moon landing as a child, Chris Hadfield thought: 'I can maybe be part of that.' (Penguin Random House Canada)

Written with his frequent collaborator, journalist Kate Fillion, The Darkest Dark tells the story of an aspiring astronaut, also named Chris, who is terrified of the dark until, inspired by the moon landing, he decides the dark isn’t so bad. (Stag Island, with tall trees casting long shadows, and dark waters hiding unknown creatures, provides the perfect setting.) It might be hard to believe, considering that he’s one of the few people to have come face-to-face with the vast oblivion that is outer space, but Hadfield was once afraid of the dark, too. The farmhouse where he grew up, between Milton and Oakville, Ont., was built in the mid-19th century. “It’s a big, old creaky structure,” he says. Once of his chores was “to go out in the dark of night” to get hay for the horses, a task which required him to climb into the hay loft “in absolute blackness, and then fumble around to find the light switch so you can get a bale of hay. But, of course, the shadows are stark and the place is noisy and there’s rats scurrying around. … You had to confront that on a regular basis. And, yeah, I was very much, like any little kid, afraid of the dark.” 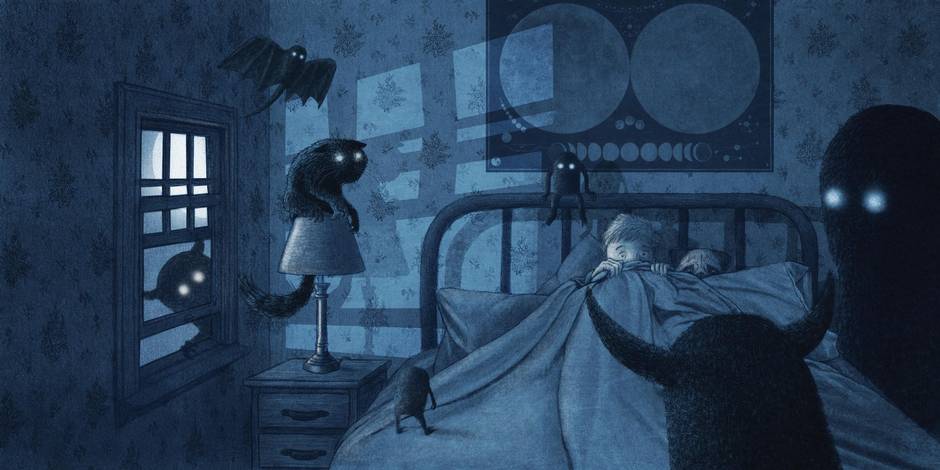 The Darkest Dark actually marks Hadfield’s fourth attempt to write a book for children. “[I thought,] ‘How hard can writing a little picture book be? It’s only got 120 words in it, or whatever … and someone else is going to draw the pictures.’ But because it involves more people, and because it involves visual artistry, and because each word, by its rarity, increases in relative importance, it actually became quite hard.”

For that visual artistry, Hadfield tapped Terry and Eric Fan, the Toronto siblings who earned accolades earlier this year when The Night Gardener, their surreal first picture book, was released. “They have a real feel for the dark. They have a real feel for fear,” Hadfield says. “So to be able to take our idea of the fear of the dark, and the enormity of it – the experience that I’ve had as an astronaut out on a spacewalk, in the eternity of the dark, and for them to be able to somehow put that on a two-dimensional page in a way that’s palpable, where you can almost feel the shadows and the things that are in the shadows – it was just delightful.” 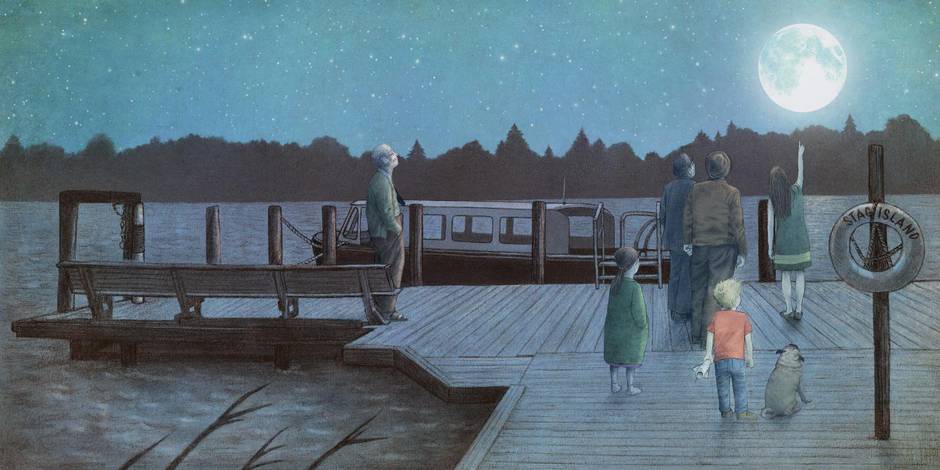 Hadfield, who recently turned 57, has unexpectedly become one of the country’s bestselling authors; his first book, An Astronaut’s Guide to Life on Earth, was published in 2013 yet was on The Globe and Mail’s list of bestsellers as recently as mid-August. That book was followed, in 2014, by You Are Here, a collection of photographs he took while serving as commander of the International Space Station. There are more than 500,000 copies of the two books in print. (A musician, Hadfield also released his first album, Space Sessions, last year.)

“It’s been crazy,” he says of his success as an author. “Astronaut’s Guide is in 21 languages, now. Although my son did remind me that he saw it in a bargain bin.”