Not that you should read anything into it, but this story about launching a new publishing venture in these precarious times begins with a proposal for a book about the apocalypse.

Vancouver-based freelance writer Tyee Bridge wanted to write a book about the end of the world – a first-person, experiential investigation into the cultural obsession with the matter. But as he continued work on the proposal, it was threatening to turn into the kind of dense book that he wouldn't really want to write – or read. He suggested it might be a great 15,000 or 20,000 word story. Publishers responded that that was an impossible length; they needed a minimum of 50,000 words to make a book. He abandoned the project.

But Bridge believes there's a lot you can say in 15,000 words. And he thought a format allowing for that kind of length – a very long magazine feature or a very short book – would have great value. Like a novella, but for non-fiction. A nonvella.

Bridge, who was renting space in an office with a group of other freelancers in Vancouver's Dominion Building, began talking with other writers about the possibility of a collaborative boutique publishing house that would celebrate the form.

"It was basically, we're all turning a little bit jaded [about] being freelance journalists, and stuff's kind of a little dire ... so it sort of made sense to kind of all pull together," says Anne Casselman, one of the freelancers with whom Bridge was sharing space.

"There are only so many times you can sit around with your buds and say WTF with writing and publishing," adds Bridge. "It's, like, okay, well if we don't do it, then who's going to do it?"

Casselman was in. And to make a long story short, the two of them launched Nonvella this spring – Bridge as publisher; Casselman, senior editor. They would publish slim volumes meant to be read roughly in a single sitting.

Their first two titles are The Silicon Rapture: Close Encounters with Artificial Intelligence and the Singularity by Adam Pez. And Foodville: Biting Dispatches from a Food-Obsessed City by Timothy Taylor – an extended memoir-infused essay about Taylor's – and Vancouver's – relationship with food and food writing. They're sold as e-books (for $3.99) or printed on demand by Amazon (around $9.99).

Taylor is an established, big name author; his first novel, Stanley Park – a fictional take on Vancouver's foodie scene – was shortlisted for the Giller Prize. Taylor was enthusiastic about what he calls their "bootstrap" venture.

"They went out and did what the market tells you nobody should do, which is start a little publishing imprint and do it in a slightly different way," says Taylor, who will continue to publish with Random House Canada; he's currently working on a novel.

"I think it's a very interesting space right now," he continues. "It's the place where people from the Internet era who still have attention spans will spend some time with a text."

But will people pay when there are all kinds of long reads available online with no price tag – even compiled and curated on some websites?

"Our threshold was it needs to be in the vicinity that you'd order at Starbucks, coffee-wise, and that sort of seems reasonable," says Casselman, when I ask that million-dollar question. "But, yes, there is tons of free online content out there and a lot of it is really good. So I don't know. We'll see how it works."

When they began working on the company in earnest, in 2012, other disruptors were introducing ambitious longform sites: Byliner, The Atavist, Medium (which was launched by the founders of Twitter).

"I think there's an ecosystem and this has been missing," says Bridge, who has a collection full of National Magazine and Western Magazine Awards. "We're not saying this is the solution to all writers' problems or all readers' problems. But it's something that I feel … really has a place."

"What we see is less money is going to writers and maybe this is just one avenue out of many that they can sort of have at their disposal to tell the stories that they tell," adds Casselman, a science journalist who writes for outlets such as Scientific American, Canadian Geographic and National Geographic News.

It would be a mistake to discount Bridge, 43, and Casselman, 33, as naive dreamers, foolish enough to launch a publishing company when book publishing and retailing as we know it is collapsing. In fact, they are whip smart talents-to-watch who have separately earned a living as freelance writers for about a decade – and that's saying something – and who have gone into this with yes, some degree of optimism ("or a certain recklessness," Bridge says) but also with their eyes wide open.

"We're convinced there's a way to make this work," says Bridge. "And who knows if it plays out. There's a gap between the magazine article and the full length book that is a beautiful spot, that works with heft and brevity. We love that spot as writers and as readers – and what remains to us now is to put on our business people's hat."

The company is extremely lean – there is no need for a warehouse, or even an office. When Bridge and Casselman meet, it's usually at a coffee shop.

Not in a position at this point to offer authors an advance, the publishers split any profits with the writers 50-50. Hardly a glossed-up vanity press, Nonvella is about quality writing. It works with the authors on their manuscripts, which go through a thorough editing process. The length and digital nature of the work make for a nimble enterprise; authors are looking at a turnaround once the manuscript is submitted of only a few weeks compared to months or years for a traditional book.

The partners emphasize that this is in beta; they are still tweaking the model. They've been surprised to receive interest from some bookstores, and have ordered copies from Amazon to supply them. (So far, you can find Foodville in Vancouver at The Paper Hound.) Seeing the value of having hard copies in stores, they've now opened an account with the print-on-demand publishing portal IngramSpark, which they say has a good distribution network with Canadian retailers.

They are considering implementing a subscription model – book-of-the-month; or, rather, Nonvella of the month.

At the same time, they are seeing challenges for this model. Byliner, which employed a subscription model (and also offers e-singles) and was once considered a darling of the digital longform scene – publishing works by authors of fiction and non-fiction such as Margaret Atwood, Carl Hiaasen and Ann Patchett – told contributors in June, it was widely reported, that it was struggling and looking for backers to continue.

"I take it as a cautionary tale about the need to be a lean start-up," says Bridge. "I don't take it lightly by any means. Because we didn't enter into this lightly."

Google Nonvella and you'll still get "Did you mean: novella" and perhaps you will for a while yet. Bridge and Casselman are going at this slowly, hoping to grow their business organically. The dream is to pay authors well, and for the publishers to be paid a fair amount. But they have other sorts of riches in mind too – fuelled by a sincere belief that writers – and readers – are being shortchanged in the current environment.

"This is about the future of readers, because to the degree that those writers are not writing those stories is the degree to which all of us readers – because we're readers too; that's why we became writers – are not reading them," says Bridge. "Because there are things that are going unsaid, unwritten, and untold, because there ain't no place to put them."

Marsha Lederman is the Western Arts correspondent for The Globe and Mail.

Marsha Lederman is the Western Arts correspondent for The Globe and Mail.

Owner of Munro’s Books in Victoria hands over shop to employees
July 9, 2014 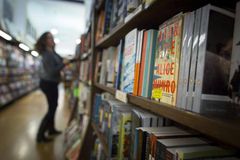