Toward the end of the First World War, U.S. soldier Lee Duncan discovered a newly born German shepherd puppy in a bombed-out kennel. Duncan brought the pup back to California, where Warner Bros. noticed him and put him into 23 blockbuster silent films, saving the studio's bacon and establishing "Rinty" as Hollywood's No. 1 star at the box office. Over the following years, he and his descendants, with help from various humans, kept the legend alive.

Texas sheriff Hackberry Holland, now well into his seventies, investigates when alcoholic Danny Boy Lorca reports seeing a man tortured to death in the desert. The case takes him into the life of Anton Ling, a Chinese woman known as La Magdalena by the illegal immigrants she feeds and shelters. Meanwhile, killer Preacher Jack Collins, the evil antagonist of Rain Gods, returns – along with his Thompson submachine gun.

It's 1997, and Jack Reacher is still a military policeman in the U.S. Army. He is ordered to go underground in small-town Mississippi to look into the murder of a local woman, and to see if anyone from a nearby army base could be involved. But local sheriff Elizabeth Deveraux, a former military cop herself, knows exactly who he is and what he's doing.

Four strong, independent women arrive separately at Masada in 70 AD, where Jewish fighters will hold off a much larger Roman force for months. Yael is the daughter of an assassin. Revka saw her daughter killed by Roman soldiers and brings her mute, traumatized grandson with her. Aziza, a warrior's daughter, was raised as a boy and is a fearless soldier. Shirah is a woman of insight and power, knowledgeable about ancient magic and medicine.

Julien Sorel, son of a country timber merchant, parlays his admiration for Napoleon and a successful career in the church into a place in Parisian high society. His cunning and ambition lead him to trouble, and to high military office, but his passion for two women – the aristocratic Mlle Mathilde de la Mole and the loyal Mme de Rênal – finally decides his fate.

Four stories from the New York reading series (and its associated public radio show): Hemon's Good Living; Lahiri's Hell-Heaven; Adichie's The Thing Around Your Neck; and Alexie's Breaking and Entering.

The Magic of Reality How We Know What's Really True, by Richard Dawkins, read by the author and Lalla Ward, Simon & Schuster, 6.5 hours on 6 CDs, unabridged, $34.99

Dawkins, the world's best known evolutionary biologist and a dedicated educator, ranges over the entire scientific world to answer dozens of basic questions – How old is the universe? Who was the first man, or woman? What is everything made of? – and to present fascinating thought experiments and mind-boggling facts.

One of the most famous short stories of all time, Stevenson's classic tells the tale of the respected Dr. Jekyll and his experiments on the dual nature of man. But those experiments unleash the good doctor's evil alter ego, Mr. Hyde, a brute with no conscience or morality. As well, this set includes an earlier Stevenson story, Markheim, a fable about conscience and the struggle between good and evil.

What is there to say? This is essentially three hours of stand-up comedy from DeGeneres, who is a very funny person.

Jacquetta, heroine of Gregory's historical romance, is descended from the river goddess Melusina, and she shares a mystic bond with Joan of Arc, a prisoner in her father's home until the English take her away to her death. Jacquetta marries into English aristocracy and ends up in the court of Henry VI, where she becomes the close companion of Queen Margaret, and fights to fulfill her own prophecy of a brilliant future for her daughter, Elizabeth, the future white queen.

H.J. Kirchhoff is deputy Books editor of The Globe and Mail. 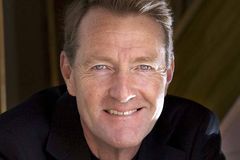