A yarn about a time traveller who thinks the best way to make the world a better place is to foil the assassination of president John F. Kennedy, Mr. King's hefty tome impressively demonstrates the staying power of the JFK myth – the idea that the youthful president embodied all the noble aspirations of the sixties and that his killing was the beginning of the violence that destroyed the dreams of the decade.

It's joined on the bestsellers list by Chris Matthews's Jack Kennedy, Elusive Hero. Mr. Matthews, the motor-mouthed host of the MSNBC political talk show Hardball, gets misty-eyed when talking about his lifelong fascination with Mr. Kennedy.

As the books' sales show, a large and receptive public likewise continues to worship at the shrine of JFK. Polls show that the U.S. public ranks Mr. Kennedy as among the greatest of American presidents, often in the same league as Abraham Lincoln and Franklin D. Roosevelt.

Rarely is popular mythology so completely disengaged from historical reality.

To place Mr. Kennedy in the same pantheon as Lincoln and Roosevelt is absurd. Lincoln presided over the Civil War and freed the slaves, Roosevelt laid the foundations for the American welfare state and led a reluctant nation into the Second World War.

Mr. Kennedy had no comparable achievements. Save for the assassin's bullet that gave him a martyr's halo, he was a mediocre president, distinguished mainly by his combination of eloquent rhetoric and often-reckless foreign policy.

Curiously, the cult of Kennedy is particularly strong in liberal circles, even though he was among the most conservative Democrats ever to be president. One character in 11/22/63 says that stopping Lee Harvey Oswald's great crime is a chance to "save Kennedy, save his brother. Save Martin Luther King. Stop the race riots. Stop Vietnam, maybe."

Not likely, actually: The son of an isolationist, Mr. Kennedy came of age politically in the late 1940s, when the tide of Cold War sentiment was at its highest. His father was close friends with Joseph McCarthy, and unlike other Democrats JFK never turned against the blacklisting senator. Indeed, like that famed demagogue, he consistently derided any attempts to negotiate with the Soviet Union or China as evidence of appeasement and unmanliness.

In the 1960 presidential campaign, Mr. Kennedy ran to the right of Richard Nixon on foreign policy, falsely accusing the Republicans of allowing a "missile gap" to develop. As president, he gave free rein to the military-industrial complex that his predecessor, Dwight Eisenhower, had criticized. Mr. Eisenhower's attempt to apply a rational cost-benefit analysis to military spending went out the window under Mr. Kennedy.

Not only did military spending increase by 13 per cent under Mr. Kennedy, but he also militarized government agencies such as the National Aeronautics and Space Administration, which became a showcase for the strutting of American power.

Foreign aid also became a Cold War tool under Mr. Kennedy, with the Alliance for Progress providing cover for America arming and training the militaries and police forces of Latin America. The military coups that rocked countries such as Brazil and Chile in the 1960s and 1970s were often led by American-trained military men.

Mr. Kennedy is often credited for his sagacity in handling the Cuban Missile Crisis. What gets forgotten is the fact that at the root of the crisis was the president's determination to spur counterrevolution in Cuba, from the Bay of Pigs fiasco to numerous assassination attempts. In avoiding nuclear war, he merely defused the crisis he helped to create by his own belligerence.

In an authoritative introduction to the book Kennedy's Quest for Victory, historian Thomas G. Paterson summed up JFK's foreign policy as consisting of "escalation in Vietnam; an arms race of massive proportion and fear, including the bomb-shelter mania that the administration stimulated; a huge increase in nuclear weapons; neglect of traditional, patient diplomacy; involvement in Third World disputes beyond America's capabilities or talents to resolve; greater factionalism in the Atlantic alliance; and a globalism of overcommitment that ensured crises and weakened the America economy."

If Mr. Kennedy was reckless abroad, he was a foot-dragger at home. On the most important domestic issue of the day, civil rights, he followed a policy of caution. Virtually all the major domestic achievements of the 1960s came under his successor, Lyndon Johnson, who was prodded by the civil-rights movement to a much bolder course of action than Mr. Kennedy ever dared.

The Johnson presidency was troubled because the epic achievements of the Great Society were undermined by the Vietnam War. Perhaps one use of the JFK myth is that it allows liberals to separate out the mixed legacy of the sixties, crediting Mr. Kennedy with the achievements of the era while laying the blame on LBJ. If anything, that gets it backward.

Jeet Heer is currently teaching an American history course at the University of Regina.

Editor's note: In the original version of this article the broadcaster of Chris Matthews's political talk show, Hardball , was incorrectly stated. This version has been corrected. 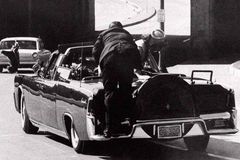