The book, marking the 25th anniversary of the first publication of Maus, takes a look back at the phenomenon, the story of Spiegelman's parents' ordeal during the Holocaust. Using vermin to represent Jews and cats to represent the Nazis, ultimately winning a Pulitzer Prize – the first comic book to do so, effectively giving the form legitimacy – Spiegelman calls the use of animals a "self-destructing metaphor," one "that is there to reveal the inanity of the notion itself."

Since Hitler's propaganda machine likened Jews to vermin, Spiegelman says he was simply extending the metaphor in Maus as a way of pointing out how ludicrous it was. "Hitler was as much my collaborator as my father was."

MetaMaus includes extensive interviews with Spiegelman, a transcript of his interview with his father, on which the Maus books were based, letters of rejection from publishers ("Everyone passed on it," Spiegelman notes) and a DVD.

While Spiegelman insists he never wanted to become "the Elie Wiesel of comic books," Maus did make him a go-to source for those seeking reflection on the genocide and its meaning. Spiegelman, who also created a comic book on the aftermath of the terrorist attacks of 9/11, is only too aware of the uses and misuses of history, part of what he refers to as "the memory industry." One of the most striking images in MetaMaus is his nod to the commodification of the Holocaust: He draws a Jewish prisoner in striped concentration-camp garb and yellow star, clutching an Oscar.

His association with the Holocaust, however, has led to Spiegelman being attacked for not supporting Israel enough. "People have screamed at me, 'How can you not be totally supportive of Israel?' " he says. "Israel is a sad, failed idea. I just feel fortunate that my parents went right instead of left after the war and we ended up in America. I'm neither pro- nor anti-Zionist. I'm a-Zionist. If I'd been around in 1948, I would have said, 'Can't we all just go live in Montana?' "

Spiegelman says returning to Maus was something he was asked to do years ago, but put off, given the considerable emotional toll revisiting the material would take. "I spent the first month of this project crying every day," he recalls. "The early part of doing a book like Maus is about developing the calluses you need to produce the entire thing."

Spiegelman does allow himself some fun; he relishes recounting one rejection letter that suggested that the story wasn't properly realized and that the relationship between father and son "was like a bad sitcom. I wrote back to that editor and asked him what cable network he subscribed to."

MetaMaus is Spiegelman's meditation on his creation and its impact: "This is my way of trying to thank the giant mouse while outrunning it at the same time."

And, ultimately, it was about answering the most-asked Maus-related questions, once and for all. (Chapters include Why Comics? and Why Mice?) "Comics are an amazing form for dealing with memory," he argues, conceding their huge impact on his formative years: "I learned to read through Batman comics."

As for his choice of rodents, "My Mickey Mouse and Tom and Jerry training led me to mice. The question comes up about the second World War: Why didn't the Jews go down in flames? Why didn't they fight every step of the way and take those … Nazis out with them? A mouse is more metaphorically appropriate for someone who's defenceless."

Spiegelman says he avoided interviews around the 10th anniversary of 9/11, despite a barrage of requests. For the record, he did not resign from The New Yorker shortly after 9/11 to protest cowardice in the American media, as was widely reported. "It was simply that. … The New Yorker doesn't serialize work, and that's what I wanted to do. It's a much more measured and reasoned place than I am a person. I finished my contract and moved on."

He does concede that he was "greatly disappointed" in an essay penned by the magazine's editor, David Remnick, during the build-up to the U.S.-led invasion of Iraq. "He said the editor was not required to offer an opinion on world events. This was during the Valerie Plame stuff. It horrified me. But the line about me resigning in protest sticks. When journalists have a choice between truth or legend, they often print the legend."

Matthew Hays is a Montreal-based writer who teaches journalism and film studies at Concordia University. His first book, The View from Here: Conversations with Gay and Lesbian Filmmakers, won a 2008 Lambda Award. 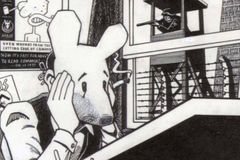