When I put Frankenstein on my first-year college class reading list, eyes rolled. Students often complain about the archaic language of the novel, which is celebrating its 200th birthday this year. But they eventually respond intensely to the story. One young woman told me it's "relatable." I wish I'd asked her whether it's the creature she relates to.

Literature profs live in hope that students will relate to something, and like many teachers, I've tried to show how the book is of its time, but fits ours too. This February, as I reread the book, I also watched the news about the shooting at Florida's Marjory Stoneman Douglas High School unfold. I was punched by the realization that the monster's vengeful rampage and its terrible effects are cousins to the devastation of a school shooting. Still for all his violence, the creature remains the heart of the book, the one you want to know and the one you pity. He's taken on fresh urgency in the year of #NeverAgain.

Since he was jolted into print, the nameless creature has grown into a rather large Rorschach blot. Interpretations are a dime a dozen: Critics have variously dubbed him a symbol of the French Revolution, slavery, abortion, a split atom or a robot. (Incidentally, I can't help seeing Guillermo del Toro's fish man in the Oscar-winning The Shape of Water as another stand-in.) Go back to the book, though, and you'll first find him peering through the bed-curtains at his creator – our title character has nodded off just after cracking the code of life. Reaching out, the creature made "inarticulate sounds, while a grin wrinkled his cheeks." It's no wonder many readers have also seen him as a kid in search of his deadbeat dad. And it's the monster's teenage qualities that make him more relevant than ever.

Through the novel, the creature develops the raw realization that he's ugly, rejected and fits in nowhere. He oscillates between longing and rage; if there were doors to slam, he'd slam them. When he turns to carnage, he tells Victor Frankenstein he has no choice after being utterly abandoned. The book's epigraph, from John Milton, reads in part: "Did I request thee, Maker, from my clay / To mould me?" That's the cry of the adolescent: "I never asked to be born." Begging assistance from Victor Frankenstein, the creature cries, "[T]o whom could I apply with more fitness . . .?" But there is no one else, and no help from the adult world, which should know better.

The survivors of the Florida high-school shooting have likewise begged for help with the #NeverAgain gun-control movement they've started. Several have become standout spokespeople, clapping back against flummoxed politicians who offer no more than the now horribly predictable "thoughts and prayers." The students' point is clear. Emma Gonzalez writes, "We are children who are being expected to act like adults, while the adults are proving themselves to behave like children." Her classmate David Hogg said similarly, "We are children. You guys are the adults. Work together, come over your politics and get something done." Like Mary Shelley's monster, pleading his creator for a mate and a peaceful exile in "the wilds of South America," the class of 2018 knows what it wants and sees how the future could be.

Shelley, often called the creator of science fiction, also saw into the future. She'd been through so much – the loss of her mother and first baby, as well as rejection by her father – and wrote with such startling force that it's easy to forget she was an adolescent too when she wrote Frankenstein. Lord Byron, host of that famously strange summer evening that inspired Shelley (when a group of friends and lovers "began to talk ghostly," as one put it), later mused that Frankenstein was "a wonderful book for a girl of 19 – not 19, indeed, at that time." The undertone there is a characteristic underestimation of what the young can do.

While Shelley's monster found no solace from his creator, the Florida students are, in a script change, doing it for themselves and I think Shelley would have cheered. Looking back on how she wrote her novel, the author recalled the stark dream that brought it to life: She envisioned the creature looking at his sleeping maker with "yellow, watery, but speculative eyes." It's the speculative that stands out. That's the way teenagers are looking at the grown-ups. The message is similar: You made this. What are you going to do about it? 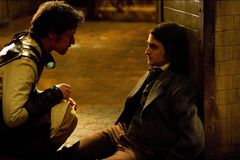