When young literary lion Pasha Malla won Ontario's $20,000 Trillium Book Award for his debut collection of short stories, he devoted his entire acceptance speech to a gushing, fan-boy endorsement of the whimsical Disney-Pixar film Up – thus thoroughly confusing an audience expecting a bracing whiff of the avant-garde.

The newcomer's stories were knowing and strange in ways typical of the most advanced and currently stylish postmodern literature. His exotic ethnicity (Kashmiri-English) and intellectual verve had already typecast him as Voice of the New Canada, meta-fictional division. But Malla in person turned out to be a charmingly naive outsider from London, Ont., a happy suburban popcorn-cruncher making a middlebrow spectacle of himself amid the nonplussed elite.

Three years later, Malla's first novel, People Park, squares the circle. Built frankly atop an edifice previously constructed by a who's who of prestigiously obscure masters – Robert Coover, Cesar Aires, Ferenc Karinthy, Mikhail Bulgakov – People Park is despite that a loose and friendly shaggy dog of a novel, often challenging but ever ingratiating. Much like the author, a serious-minded young man who learned early not to take himself too seriously.

Pausing in the shade to discuss his novel in the midst of a household move – down one floor in the Riverdale semi where he and his partner rent a flat – Malla actively resists the role of cultural sage, constantly censoring any incipient punditry. "What do I know?" he asks, genuinely bewildered – and also, he adds, "embarrassed" when fellow young lions pretend they do know.

"One of the reasons I write fiction is that fiction is a great space for equivocation," he says. Questions breed questions; answers are elusive.

"Have you ever heard an author on stage at a festival say, 'I don't know?' " Malla asks. "Wouldn't that be nice? I can't wait till somebody asks me a question I don't know the answer to, so I can admit I don't know."

Such questions might well include the most obvious: What is your book about?

The easy answer is that People Park is about the crisis experienced in an imaginary city over the course of a four-day visit by a sinister magician. It is about an enormously various number of things that happen to an exhaustingly large cast of characters. But the real answer to the basic question, Malla insists, is up to the reader.

"I'm a controlling person by nature, so I made a kind of challenge to myself to let go a little bit, to force myself to allow room for different interpretations," he explains. Already readers are peppering the author with novel readings he never explicitly intended, entering the sprawling space of People Park by means of gates deliberately left open and threads hanging.

"To me those are the spaces in the book I love that really excite me the most," he says, "when it's up to the reader on their own to figure out what might have happened.

"And that's when books continue to live with you – when you've felt some kind of agency through reading it."

In People Park, "agency" moves in channels of play and magic. "There's this real joy in giving yourself over to that kind of entertainment," Malla says. "It's a leap of faith that you take with the author, one of the few things adults do that still feels like playing. There's something innocent in it, something liberating."

But by no means all sweet and sunlit. Malla's imaginary city grows from "a palpable sense that things are headed in a wrong direction" in the real world, he says. Although careful not to contradict readers who might think otherwise, he adds that he included "a number of very quiet clues in the book that it's set in 1984."

Malla personally felt the anxiety that underlies the friendly exterior of People Park when he was overwhelmed by the intensely diverse yet ultimately dissatisfying experience of Toronto's Nuit Blanche cultural festival. "It felt like being inside the Internet," he says. The whole city rushing from one amusement to another, its interest exhausted a moment after being aroused, worried there is always somewhere better to be.

Such is the atmosphere of People Park. "I wanted to capture, in a kind of sideways fashion, the way that living makes me feel," Malla says. And to explore how "a mass cultural hysterical Internet culture" undermines the life of the individual.

Once again, punditry raises its ugly head. And once again, personable Pasha beats it down – volunteering that among the classics he plundered for the themes and settings of People Park were the works of Stephen King. The stuff he read as a thoughtless teenager embedded in the ordered reality of his home and native Middlemarch.

King left him cold the second time around, Malla admits. His tastes have evolved to embrace the most challenging forms of contemporary fiction. But there is nothing deceptive about the modest goals of his ambitious and sprawling first effort at the long-form game.

"Novels certainly can't save us," he says, characteristically lowering expectations. "But they can provide spaces where true introspection happens." And People Park is nothing if not ample in such spaces. 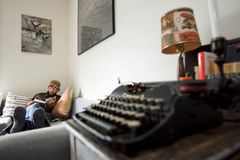