One day last July, the poet David O'Meara received an e-mail from his friend Elise Partridge. They'd known one another since 2002, when her first book of poems was published. Her note contained a request: She wanted him to edit her new collection, which she had just sold to a publisher, and which was scheduled to be released the following spring.

There was a catch. She had been diagnosed with colon cancer in February, and this, she knew, would be her last book.

"We had a small time frame of a few months, so it was intense, candid and very focused," Mr. O'Meara says. "Elise has always been a very meticulous poet, and her illness didn't change this. Through the chemo and late-stage treatments, she was writing to me fastidiously about punctuation and line breaks, wanting every word choice to be in its best place. Her dedication was always deeply moving, but so much amplified by the situation. She was brave and generous to the end."

The end came on Jan. 31, when Ms. Partridge died in the Palliative Care Unit at Vancouver General Hospital. She was 56 years old.

"It doesn't surprise me that the discussion on social media of Elise's death has centred as much on her as a person as on her as a poet," says the writer Stephanie Bolster. "The two were inseparable. The generosity of spirit, the deep humanity, the ability to see each person or thing clearly and for its own qualities, marked both Elise and her work. Just as her poems didn't simply look at, but saw, the bird or insect one might otherwise let pass unacknowledged, so her desire to reach out to writers whose work she admired made those of us fortunate enough to benefit from her attentions feel truly seen and understood, showered in a praise that was so sincere and effusive as to be, at times, close to overwhelming."

Elise Tompkins was born Nov. 19, 1958, in Philadelphia, Penn., and was raised in nearby Wynnewood. Her father ran a printing business, while her mother was a homemaker. In an interview conducted by her friend, the poet Susan Gillis, last fall, Ms. Partridge spoke of her early encounters with poetry, from "a book of nonsense poetry" she received for her birthday when she was in Grade 3, to listening to her minister give "a series of sermons based on W.H. Auden's [For the Time Being:] A Christmas Oratorio," to high school, where she had "a remarkable teacher who introduced us to Prufrock, Donne, Lear and many others.

"One day, she gave us an assignment to write a poem, and I turned in something awful about a dead seagull," Ms. Partridge recalled.

"This teacher was a very tough grader who didn't hesitate to flunk students, and when she handed my effort back, I saw she had written at the bottom in red ink, 'I recognize poetry here.' I thought she was being sardonic, but when we next met she said no, she thought I had a gift."

After high school, she studied English at Harvard, where her professors included Robert Pinsky, the eventual United States Poet Laureate. She was only 19 or 20 years old, but he remembers her as "a college student accomplished beyond her years and generously attentive to other people as few of us are at any age. I was poetry editor of The New Republic and published one of her poems – the only time for any undergraduate." She also attended Cambridge, Boston University (Dr. Pinsky, now teaching there, was her thesis adviser) and the University of British Columbia.

In 1983, on one of their first days as graduate students at Harvard, when she had returned from Cambridge to pursue a master's, she met Stephen Partridge – they were both in line waiting to see the graduate student adviser. They were friends for several years before dating, and dated for several years before marrying, in 1994. By this time they were living in Vancouver, where Stephen had accepted a position teaching medieval literature at UBC. The couple dove into the city's writing community, becoming members of the Poetry Dogs, a "reading group" consisting of novelists and poets, editors and translators, graduate students and professors, who would gather each month to discuss contemporary poems. She also became an active member of the Vancouver Character House Network, fighting to preserve the city's original homes from developers who'd purchase them only to tear them down.

"She was so fierce," says Caroline Adderson, a friend, neighbour and fellow activist. "She was always talking about chaining herself to the bulldozer."

But most of all she was a poet, and a very good one. In 2002 she published her first collection, Fielder's Choice. Robyn Sarah, writing in the National Post, called it "about as good a first book of poems as I've come across" while Ken Babstock, reviewing the collection in The Globe and Mail, praised Ms. Partridge as "a technical wizard" and "a hawk-like observer of the particular, and every poem is built on solid footing, the poured concrete of the deeply considered, many times ascending to pitch-perfect verse." It was a finalist for the Gerald Lampert Memorial Award, which recognizes the best first book of poetry published in Canada each year.

Ms. Partridge had been diagnosed with breast cancer in 2001; she underwent a year of intensive treatment, and then took hormone therapy daily for the next five years. During this time she served on the organizing committee for The Young and the Breastless, which was held in Vancouver in May, 2004, described by her husband as "the first-ever national conference for young women diagnosed with breast cancer."

"It's almost as if it's a poetics of leave-taking," says her friend and fellow poet, Miranda Pearson. "Her attentiveness to the world was acute because of her comprised mortality." The book was nominated for the BC Book Prize and won the Canadian Authors Association Poetry Award. Yet her friends say she was humble when it came to her own accolades. Ms. Adderson recalls flipping through an issue of The New Yorker one evening and coming across a poem by "Elise Partridge." When she saw her friend the next day, she asked if this was her work. "She just turned red and said, 'Oh, yes it is. That's sweet of you to notice.' It's unbelievable. That's who she was. She was so giving of other people's work and so self-effacing about her own."

Stories of Ms. Partridge reaching out to her peers to express admiration are countless. Her friend Barbara Nickel says Ms. Partridge "would take the time to respond at length to, say an essay you'd written that you were hoping for feedback from her on, even if it meant that she'd lose sleep and sacrifice a huge chunk of her own time to do it." And although they had never met, Suzanne Buffam recalls receiving a letter from Ms. Partridge not long after publishing her first book. It was "the most generous, articulate, and thoughtful letter about it I've ever received," she says. "It was the kind of reading a young poet could only dream of receiving – from anyone, let alone from a poet she admired as much as I admired Elise. I'll likely never get a reading as thoughtful and thorough again."

After her diagnosis, Ms. Partridge spent the last year of her life finishing her book and travelling with her husband. They spent New Year's Eve in Times Square watching the ball drop. "She had said for years, 'I want to go some day.' So we went," he says. "She was physically active as long as she could be."

She was admitted to the hospital on Jan. 30, and died the following day.

Ms. Partridge leaves her husband; her mother, Marjorie Tompkins; and three brothers, Tim, Fenton and Kirby. A memorial service will be held in Vancouver on Feb. 28 at the Cecil Green Park House on the UBC campus, and plans are under way to celebrate her life and work when her third collection, The Exiles' Gallery, is published by House of Anansi Press in April. She saw the cover – which features a painting by her former art teacher and friend Ruth K. Fackenthal – and approved final edits before she died. Only the acknowledgments went unfinished; her husband wrote them on her behalf.

"She was able to see exactly what the book would look like," he says. "The book is entirely hers." 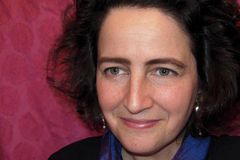