A cardboard box sits beside Ramon Perez's drafting table, apparently overlooked amid the acid colours of the posters covering the studio walls. But for the past seven months, that box of drawings has consumed his life.

This may be the Toronto comic artist's dream project, but with his illustrations, Perez is also realizing Jim Henson's dream, bringing to life an unproduced screenplay that had been sitting in an archive for almost 40 years.

Yes, it's the Jim Henson, of Muppets fame. But this isn't puppet fare. There are no frogs. No variety-show sketches. In fact, the project – Tale of Sand, a Henson film script re-envisioned as a graphic novel – reveals a different side of the iconic artist.

Henson began writing Tale of Sand – which launches in the U.S. this month and in Canada in January – back in 1967. A collaboration with Jerry Juhl, who later became head writer on The Muppet Show, the surrealist tale follows an Everyman character named Mac, who embarks on a journey across the desert, barely escaping a shark attack and a nitroglycerin explosion.

Perez, 38, was picked from a short list of five artists because of his cinematic storytelling skills and versatility, says Stephen Christy, editor-in-chief of Archaia Entertainment, a publishing company that produces a line of Henson Company comics and graphic novels. "He above and beyond blew away everyone else we were talking to," Christy says.

Writer Jim McCann recommended Perez after they worked together on McCann's Marvel Comics title Dazzler. Perez's eclectic CV also includes work for Owl Kids Magazine, and illustrations for Star Wars: The Clone Wars and a Degrassi graphic novel. He took a hiatus from his own webcomic, KuKuburi, to work on Tale of Sand.

Muppets aficionados unfamiliar with Henson's art-house origins may be surprised by Tale of Sand's adult themes (there's even brief nudity), but may recognize some imagery. For instance, Mac stumbles on a ghost town inhabited by a skeleton horse. In The Muppet Movie (1979), Kermit and the gang arrive in a similarly deserted town for a showdown against Doc Hopper, the evil owner of a French-fried frogs' legs restaurant chain.

Jim Henson Company CEO Lisa Henson – Jim's daughter, and one of his five children involved in the production company – was aware of the screenplay but hadn't read it. She remembers her father and Juhl working on it during a cross-country family trip to a Colorado dude ranch, and believes the drive across the desert and its "vast expanses of emptiness" helped form the idea for Mac's journey.

Henson was still creating puppets for commercials and corporate training films when he wrote Tale of Sand, struggling to get his television programs noticed by broadcast networks. Mainstream success was still years away when he began producing experimental films, including the 1965 Academy Award–nominated Time Piece, a nine-minute, live-action piece in which he also starred.

The energetic meditation on urban life is set to a percussive soundtrack Henson created from everyday sounds like chewing and car horns. In fact, both films employ little dialogue. "He was more interested in syncopation of sound and images," Lisa Henson says.

Henson abandoned the third draft of Tale of Sand in 1974, two years before the first episode of The Muppet Show aired. Lisa Henson speculates that he gave up because the film's non-linear structure would have made it impossible to secure production financing.

The script remained in the Jim Henson Company archives until Christy asked if there were any unpublished screenplays that could be adapted into books.

"This is the only thing left from Jim that is fully completed and never seen before," says Christy. "The book is not just about the story, it's a lost work of art."

Lisa Henson credits the new Muppets movie and Google's homepage celebration of Henson's 75th birthday on Sept. 24 for the public's revived interest in her father. But even now, she isn't sure Tale of Sand could be shot successfully as a film.

She says she's confident Perez's graphic novel will be the only version true to her father's vision.

Perez immersed himself in Henson's words, believing the screenplay offers insight into the personal challenges faced by the young puppeteer. "I could see the correlations with my own career and as a struggling artist," Perez says. "Jim Henson, the man of all men, went through the same things I did."

Without dialogue to rely on, Perez drew visual inspiration from 1960s advertising and films, and colour palettes from Time Piece. Pages from the physical script are scattered throughout the book – Henson's typewritten words merging with the landscape. Early on, there was talk of young Henson standing in as Mac, but the idea was abandoned for a more rugged protagonist.

"Ramon gave it a really muscular quality that I like," Lisa Henson says.

As Perez waits to hold a physical copy of the book, he now has time to let the intensity of the project sink in. "No pressure," he says, laughing. "My concern is whether people will get it."

He pulls an illustration from the box: It's Mac, leaping back as a lion emerges from the back of a limousine. "This experience is like Mac's," Perez says. "It came out of nowhere." 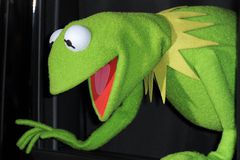 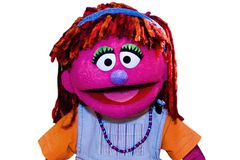