The winner of the RBC Taylor Prize will be announced on Monday, March 2. In the lead-up to this year's ceremony, we asked each of the five finalists to answer some questions about non-fiction writing. Today Barbara Taylor discusses Jean-Jacques Rousseau, the challenge of writing about mental illness, and the inspiration behind The Last Asylum: A Memoir of Madness in Our Times.

In 1988 I was admitted to a London mental hospital. The hospital was the old and famous Colney Hatch Lunatic Asylum, now scheduled for closure. A historian friend came to visit me. Agog with excitement, he hugged me and exclaimed: "Darling Barbara! What a privilege for you, as a historian, to be present at this demise of one of the last great Victorian institutions!" His words annoyed and amused me – and they lodged inside me. Twenty years later I decided to act on them by telling the story of my years as a mental patient. What kind of book would this be? I didn't want to write a standard "misery memoir." I did want to write about me, and to do this very honestly and intimately. But remembering my friend's excitement, I decided to set my experiences inside the story of Colney Hatch and all the rest of the mental hospitals which closed in the late twentieth century, replaced by so-called "community care." I began studying this history, and soon I became very angry. Talking to people, reading reports, I discovered that community care had failed; that mental health systems everywhere were into meltdown. People were being neglected and suffering badly. This discovery became the second inspiration for my book.

Who's your favourite non-fiction writer? Why?

I have spent many years studying the philosopher Jean-Jacques Rousseau and I never tire of reading him. His ideas about human nature are both deeply insightful and crammed with unresolved paradoxes, which seems right to me as people are very paradoxical.

Writing about serious mental illness is inherently challenging. How to find the words to express experiences that were inexpressible at the time? A second challenge arose from my decision to combine my story with a historical account of recent changes in mental health care. Could I link the personal to the historical without diminishing one or either? Would I lose readers along the way? But I was keen to stretch my literary wings and overall I enjoyed tackling these challenges.

What's your favourite work of non-fiction? Why?

I moved from Saskatoon to London in 1971. I miss Canada a lot, and return as often as I can, but I have come to love this huge rackety old city. In the early 1930s Virginia Woolf wrote a series of articles on London for Good Housekeeping Magazine which were later published as The London Scene. Like all of Woolf's works, these essays are wonderfully observed and exquisitely written: love letters to a great city from a great writer.

If you could write a book about any topic, with unlimited financial resources to research it, what would it be?

I would write the book I am working on now – on the history of solitude – but I would have much more time to devote to it!

An excerpt from The Last Asylum:

I am visiting with Mum and Dad, staying in the house where I grew up. Eve and the New Jerusalem has just been awarded the Isaac Deutscher Memorial Prize. Just before leaving London I had received a letter from an Oxford college, informing me that I was long-listed for a fellowship there. When I tell Mum about the fellowship, she responds by telling me how as a toddler I once spoke to her in rhyme. 'So I thought, why shouldn't I have given birth to a genius?' 'Just like you,' I reply, then – vengefully– 'that's why I'm so ill.' Later she repeats this conversation to Dad, leaving out the bit about illness.

Dad reads the poem, closes the book, and begins talking about all the wonderful novels I am going to write. 'How about one called Alice Back through the Looking Glass?'he proposes, then looksup at me, surprised by his choice of title. He says nothing about the poem. Mum reads it carefully several times. 'Such a strange poem, Barb, what is it about?' But I won't say any more. I am sitting at the kitchen table with her and she smiles at me. I know that smile well; my muscles tighten. She reaches out a hand and strokes my cheek. 'Dear, I know that you are mentally unwell. I know that, Barb,' she says, still smiling, 'because you won't explain your poem to me.'

My mother, I told V on our first meeting, is my best friend. She understands me better than anyone else, better probably than I under stand myself.

A woman is rushing down a city street, holding a little golden-haired girl by the hand. She pushes the child into my car and hurries on. I drive my car into a nearby street and park and walk away. But what about the little girl? I hurry back to the car but I can't see the child: where is she? I dig down into a pile of garbage beside the car and pull out a golden-haired doll. But no little girl – she has vanished. I walk through the city; searching for the child. The streets are concrete and granite, treeless, empty. I come upon a small amphitheatre where a group of people is standing around. They are members of a cult which kills little girls, cracks open their skulls and eats their brains. I walk among these people and at first they aren't perturbed by my presence. Then they begin to become suspicious. I look around frantically for the little girl but there's no sign of her. 'What are you doing here?' a man asks me. 'I'm looking for my mother,' I tell him. 'Your mother?' he laughs, and I see that my mother is standing next to him, holding a knife to her chest. 'Where's the car?' she shouts at me. I scream back at her, 'Where's the child? You have killed her!' 'There was no child,' she tells me. 'There was no child, there never was a child, there is no child,' the crowd chants at me – and I wake, heart pounding.

I write this dream in my journal, hiding away in my bedroom in Saskatoon. As I do so, I am suddenly overcome with fear that Mum and Dad will read it and discover just how insane and dangerous I am. They will have me locked up; they will refuse to allowme to return to London; they will keep me for ever in this daughter-hell they have created for me. Maybe I should kill them first? This fantasy scares me so much that I want to run away, and I hurry to reassure myself that these are just thoughts, and that Mum and Dad will never read what I've written. As I'm telling myself this, the door swings open and Mum walks in. I barely have time to hide my journal. 'Hi, Barb, what are you doing?'

When I was thirteen Mum found my diary and read it through. She told me about this a few years later. 'I was sure you wouldn't mind,' she said comfortably. 'It was very interesting.'

For the rest of the visit, I keep my journal in my shoulder bag.

RBC Taylor Prize nominee David O’Keefe on what inspired his book, One Day in August
May 12, 2018 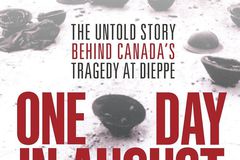 RBC Taylor Prize nominee Plum Johnson on the art of non-fiction
May 12, 2018 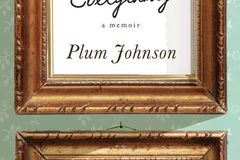