What is it with Anne Frank? From a school text to a Broadway play to a Hollywood film, critics, producers and directors just can't leave her alone. Philip Roth revived her in The Ghost Writer and David Mamet is soon to provide a new film life. YouTube even has an Anne Frank channel.

And now Francine Prose, novelist, essayist and critic, takes her on - or, more accurately, provides yet another account of the discovery, editing, publication and reception of the Diary.

In a swift but occasionally incomplete account of Anne and her family, from the Franks' false safety in Amsterdam to the writing of Anne's diary and the arrest and death of the family (with the exception of her father), Prose provides a survey of the life and afterlife of the Diary. Three points emerge: 1. Anne harboured thoughts of being a writer even before she began her diary at 13. 2. She actually revised the diary with an eye toward its possible publication after completing a first draft. 3. Controversy, lawsuits and betrayals define the afterlife of the book, which quickly became a money-spinning property.

The last point is perhaps the most intriguing, as we learn of edits by Anne's father, Otto; Carson McCullers's early interest in adapting it for the stage; Meyer Levin's battle over dramatic rights; and the alterations that occurred in preparing the work for the stage and screen. The purpose of Prose's book is really to clear the air, allowing us to see the Diary as an artful recounting of a traumatic and ultimately tragic experience at the same time it became a commercial property read and seen by millions.

The popularity of the Diary has never been questioned. From its first appearance in English in 1952, aided by Meyer Levin's counsel to Otto Frank, whom he befriended after reading a French edition of the work, it received immediate attention. Three weeks after its publication, Variety ran a list of possible Broadway producers. But a fight over who would dramatize the Diary ensued with names such as Lillian Hellman, Clifford Odets and Arthur Miller mentioned. Meyer Levin ought for the right to do the adaptation. But the producer, Kermit Bloomgarden, and the director, Garson Kanin, heeded Lillian Hellman's advice: The play would need a lighter touch to succeed, which Levin did not have.

The script for the Broadway production was by the screenwriting team of Frances Goodrich and Albert Hackett. An angered Meyer Levin took out a full-page advertisement in The New York Times castigating the producer's decision, but the ad alienated his ally, Otto Frank. Nonetheless, the play opened on Oct. 5, 1955. This new version ended optimistically, with Anne stating that people are good at heart despite the threatening footsteps and sirens from outside the attic.

The play, more sentimental and hopeful than the Diary, was a hit. Susan Strasberg starred as Anne and it ran for 717 performances and won a Pulitzer Prize.

A 1959 film version of The Diary of Anne Frank directed by George Stevens won three Academy Awards and was nominated for best picture; it was also adapted for television several times and was revived on Broadway in 1997 with a cast that featured Natalie Portman.

And from Otto Frank's bowdlerized edition to a Critical Edition and then a Revised Critical Edition, dispute over the text has continued. Prose discusses them all, as well as Otto Frank's belief that the Diary was not a war work, nor even a Jewish work. Its focus was persecution and survival.

While Prose's retelling is useful, there is little new, except perhaps the idea that Anne herself carefully revised the text with the hope of publication. But Prose's account relies too much on speculation. Throughout, she imagines what Anne thought or wanted to do or hoped to do with the text. When the family is uncovered and Otto Frank shows the courteous Gestapo sergeant the marks on the door frame registering Anne's growth to confirm the length of time they hid, Prose writes, "What could Anne have thought" during this action? She then unconvincingly imagines what Anne might have thought.

But Prose is effective in recounting the drama of the Franks in Auschwitz and then the transfer of Anne and her sister to Bergen-Belsen and her death from typhus and malnutrition. Prose has read the personal accounts of others who witnessed Anne's demise, including letters, autobiographies and essays. Yet there are claims that are not clear, especially in attributing to Anne a perceptiveness of humanity's darkness at odds with the romanticized endings of the Broadway play and film.

Nonetheless, Prose praises her "apparently irreconcilable ideas about mankind" and says the book is a "testament" to the ability of individuals to maintain compassion and humour under "intense stress." She then quotes the lengthy and well-known passage where Anne resists despair: "I simply can't build up my hopes on a foundation consisting of confusion, misery and death."

Cynthia Ozick's 1997 New Yorker essay, Who Owns Anne Frank?, railed against those who severed Anne's story from its tragic conclusion. Sentimentalizing and distorting Anne's account has done violence to her life, Ozick maintained. Prose partly agrees, although she suggests that without this divide, the Diary would likely not have been so widely accepted.

Primo Levi perhaps best expresses the importance of Anne. In a passage of his that appears on a wall of the Anne Frank House Museum in Amsterdam, he writes that "one single Anne Frank moves us more than the countless others who suffered just as she did, but whose faces have remained in the shadows." Why? Because if we were capable of taking in the suffering of all those others, we could not live. Through Anne, we can survive.

Ira Nadel is a professor of English at the University of British Columbia and the author of several books, including David Mamet: A Life in the Theatre.

Why Anne Frank will always be with us
February 3, 2012 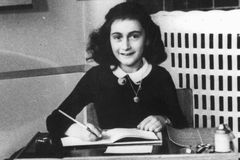