Given this species' fascination with the idea of talking animals - seen in everything from Eden's speaking serpent to Saturday-morning cartoons - it is strange that so little attention is paid to the fact that some apes can talk. Since the chimpanzee Washoe was first taught American Sign Language in the 1960s, many apes have also learned ASL (as well as a touch-screen lexigram computer program). One would think that finally being able to talk to the animals would have created a sea change both in our lives and theirs. Or to paraphrase John Thigpen, the journalist hero of Sara Gruen's new novel, Ape House, that it would change our comprehension of the world in a profound way.

The sad fact is, however, that interspecies communication between apes and humans has not really bettered the apes' lot. They have spoken to us on many subjects - everything from their food preferences to their empathy for other species - but we continue to treat them both cavalierly and cruelly. We vivisect them; we shoot them for food and then steal their orphaned children for "pets" and sideshows; we burn their homes above their heads. It doesn't matter what the apes have to say about it. We still treat them like … well, like animals.

The ongoing plight of the world's great apes informs the setting of Ape House. Isabel Duncan is a researcher at the fictional Great Ape Language Lab (roughly based on the language labs of the Great Ape Trust in Iowa, where Gruen herself has visited by invitation). Isabel is the companion and friend to a troop of talking bonobos (a great ape species often mistaken for the chimpanzee), who live with her in the "lab," expanding their vocabularies while ordering in lattes through the lab assistant, the tattooed and punky Celia.

The bonobos are confined inside (occasional outside excursions have resulted in their being mobbed by humans hooting,"Monkey, monkey!"), so now they live safely inside the large facility, making blanket "nests," learning language and watching movies like Greystoke: The Legend of Tarzan, Lord of the Apes on their TV.

But the Peaceable Kingdom comes to an end when the lab is bombed by an animal-rights group that believes the bonobos are being experimented on. The bombing badly injures Isabel, and the bonobos are kidnapped. Trapped in a hospital bed with her face smashed, she can only lie there helpless, knowing her "friends" are in danger. Meanwhile, her lover, an animal behavioural scientist named Peter, promises to keep looking for them, but quickly gives up, suggesting that Isabel "start over" with new bonobos. She soon drops Peter, and she and Celia - along with a crew of supporters whose identities prove surprising - continue the search.

Among the searchers is John Thigpen, the journalist. He had lost his job with the Philadelphia Enquirer shortly after having interviewed Isabel and the apes, just before the bombing. Thigpen is desperate to continue with the story, particularly when the bonobos turn up as stars of a reality TV show called Ape House, but he is in the middle of a marriage crisis with his beloved wife, Amanda. Their marriage problems form almost as much of the novel as does Isabel's search, which works fine, because their situation is worth the attention.

Despite the premise, this is not a story told by the bonobos or from the bonobos' point of view: It is not Watership Down. It is very much about the humans and their relationships, with each other and with animals.

So as a story about a group of humans impassioned by a quest to save their animal friends, this is a terrific book. It is peopled (so to speak) with characters who are meaty and real, with only the reality-TV villain Faulks and the hooker-with-a-heart-of-gold Ivanka occasionally straining credibility. Its style is less lyrical than Gruen's previous work, the bestselling Water For Elephants, almost reading like a thriller at times. It is a page-turner written with flair, imagination and a sharp sense of irony.

I do have some issues with the tidy ending. Throughout much of the book, I had been haunted by a scene in which Isabel is smuggled into an animal-research facility to see if six just-delivered apes are the missing bonobos. They are not, and although Isabel weeps for the suffering animals, the story never returns to them. So when the happy ending is reached, I for one am still thinking of those poor apes that were left behind, without any happy ending for them in sight.

Sara Gruen is clearly an ardent animal-lover herself, and no doubt she hasn't forgotten them, either. Perhaps she hopes that her book will change things for them and for all the apes, who despite having learned to talk to us, have not yet been able to teach us how to listen.

Diane Baker Mason is a Toronto lawyer with an interest in animal-welfare law. She is the author of Last Summer at Barebones and Men With Brooms. 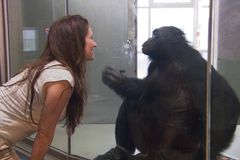