I won't lie to you. Right out of the chute, as you might say - ere I even cracked the covers - I was predisposed to like Eating Animals.

Now, having read Jonathan Safran Foer's book (twice), I am relieved to report I like it even better. Here's a young, hot-shot American novelist taking on a tough non-fiction topic like factory farming, devoting three years of his life to researching and interviewing slaughterhouse workers, small-scale ranchers (including a vegetarian) and various animal activists.

How terrific that he has emerged with an accessible, snappily written work destined for mainstream media focus and a wide readership, even among the thinking classes who have done their level darnedest - with some success - not to think about who's on the end of their fork and how he or she got there.

There's little new in the ugly picture Foer paints of the hideously cruel, environmentally destructive, medically unsound and frequently sadistic ways in which 99 per cent of livestock animals (not to mention equally appalling numbers of farmed and wild fish) live out their stunted lives and meet their premature deaths - all in the name of producing the highest amount of animal protein at the least cost per unit in the entire history of this supposedly "civilized" world.

As far back as 1975, Peter Singer's Animal Liberation offered detailed descriptions of cramped cages, un-anaesthetized castrations, inhumane transport and botched slaughter of pigs, poultry and cattle. In the decades since, countless exposés of industrial animal-rearing and mechanized slaughter have appeared in print and, increasingly, as gruesome, grainy footage on the Internet. Critiques of animal agriculture now routinely include attacks on the ecologically destructive effects of livestock waste, as well as the ravages wrought by the hormones and antibiotics fed to the creatures we feed on. Even in an ethical-carnivore-friendly book like Michael Pollan's The Omnivore's Dilemma (which Foer both appreciates and deplores), there is enough concern about the way most meat is produced to twit the blissful ignorance of the least animal-empathetic "foodie" on Earth.

What Foer contributes is his uniquely arresting ability to convey unspeakable descriptions and first-person accounts of how food animals live and die - some through the deliberate sadism and torment of slaughterhouse workers as desperate and degraded as the creatures they kill - in a way that captures his own naive horror. His impressive array of statistics manages to be hair-raising rather than mind-numbing, as he exhibits a marked talent for what I think of as "the size-of-five-football-fields" technique. Which means he can translate appalling abstract numbers into visceral equivalents - such as which 18 cities (including New York, Los Angeles and Chicago) the 31 million pigs who perish annually at the United States' leading pork producer could populate.

Does everything in Eating Animals work? Not for me. Foer writes about how, after 26 years of disliking animals in general and dogs in particular, he was unaccountably smitten by a puppy on the street. George, that dog, which he adopted, furnishes an entry into why we eat pigs in our culture, but not dogs. But Foer's pig-versus-dog comparison has been made before, and better. Far more pertinent would be the answer to a question he never raises: What does he feed George, and does that food come from factory farms?

Foer rightly pillories the egg industry - including the mythical "free range" - for its brutality. Yet he never extends his restrictions against meat to respect the equally (or perhaps more) poignant progeny of laying hens. And while he questions whether any farmer, however small-scale, can raise animals commercially without treating them as mere commodities, he doesn't once nod in the direction of other animals victimized by vast objectification, including "ranched" mink, or mice, dogs and rabbits sacrificed in their millions to test products from cosmetics to floor wax to pharmaceuticals.

True, eating animals is the realm to which Foer has limited himself. Even so, his account of the treatment of animals mass-produced and mass-slaughtered for human benefit feels incomplete when factory-farmed food alone is under consideration. Similarly, Foer waffles on whether it's eating non-humans from factory farms, or just eating non-humans, that worries him. "My decision not to eat animals," he declares at one point, "is a commitment made within the context of my life, not anyone else's. … For me, to conclude firmly I will not eat animals does not mean I oppose, or even have mixed feelings about, eating animals in general."

In another time and place, before industrialized farming, the author might - like his starving grandmother in war-torn Europe - have refused pork because it wasn't kosher. Yet, had that proffered meat been cow, or chicken or turkey, he presumably would have chowed right down.

But let's not quibble, Sybil. Jonathan Foer's book does more to afflict the comfortable than it does to hamper the struggle to bring non-humans within the purview of ethical consideration. Ultimately, the readership of The New Yorker, The New York Times and The New York Review of Books, along with the fans of Michael Pollan and humane slaughterer Temple Grandin, are going to have to reckon with the vast unease generated by Eating Animals.

Still, when Foer ends by declaring that "factory farms will come to an end some day," I worry that the overwhelming evidence of everyday practice challenges his wistful prediction. At the same time, I hope to hell this smart young New York writer knows something I don't. Yet.

Erika Ritter is the author of The Dog by the Cradle, the Serpent Beneath: Some Paradoxes of Human-Animal Relationships, which has been short-listed for the 2009 Writers' Trust Non-fiction Prize. 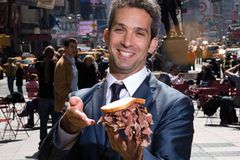 Review: The Book of Genesis Illustrated by R. Crumb
November 13, 2009
Follow us on Twitter @globebooks Opens in a new window
Report an error
Due to technical reasons, we have temporarily removed commenting from our articles. We hope to have this fixed soon. Thank you for your patience. If you are looking to give feedback on our new site, please send it along to feedback@globeandmail.com. If you want to write a letter to the editor, please forward to letters@globeandmail.com.
Comments