Consider the enormous baggage certain writers haul about. And I'm not talking about steamer trunks crammed with dead alcoholic fathers, both literal and literary, but the dead weight of expectation.

Most recently, there was Yann Martel, with his Booker Prize for Life of Pi, around seven million in world sales, a seven-figure advance and rumours of meddling by an international coven of publishers. Now, here's Jonathan Franzen, who infamously dissed the mighty Ms. O's Book Club, and went on to win the National Book Award for The Corrections, sell more than a million copies in hardcover in the U.S. alone and write defensive essays on the state of the literary enterprise. Just prior to this week's publication of his eagerly awaited fourth novel, he made the cover of Time magazine, accompanied by the headline Great American Novelist and a furrowed brow (as if wondering why they left off the question mark).

Unlike Martel, for whom the reception of Beatrice and Virgil was mixed, Franzen has been met by a Hallelujah Chorus in the U.S., along with sighs of relief that declarations about the death of the novel have been premature.

Like 2001's The Corrections, Freedom is rich in character and incident, with a nuclear family in meltdown at its core. But the psychic landscape has shifted in this post-9/11 narrative.

In The Corrections, the Lambert parents were conservative, with old-fashioned values and three grown children who appeared to be messing up their lives spectacularly. It was a portrait of America from mid-century to the freewheeling and over-dealing eighties and nineties, of big pharma, mental-health issues and greed.

In Freedom, the Berglund parents, the principled environmentalist and feminist Walter and his wife, Patty, a former jock turned perfect mother (or "mad housewife," as a neighbour comments), face off against the backdrop of the war on terror, a stricken environment and class warfare, while their daughter, Jessica, muddles through and son, Joey, moves in with Republicans next door, the only household on the street that has defied gentrification.

Walter Berglund is the moral centre of the novel - a truly good man, with the most compromised character. He beds down with big coal in order to create a Pan-American migratory bird sanctuary, he's a proponent of zero population growth who has sired two kids and is tempted to go for a third, he's killing his wife with kindness. So when the good man gets angry, when Walter finally blows his top and has his Network, I'm-mad-as-hell moment, it's glorious.

While The Corrections had a strong edge of satire, unsettling subcutaneous currents, and a kind of grandeur, Freedom, while rife with social commentary, is more straight-ahead; people generally say what they mean and we're told how they feel ("Joey smiled fiercely to keep himself from crying," and a few lines later, "He wasn't even angry, he just wanted to leave the hurt behind.")

The "freedom" theme could wallop the dopiest English 101 student on the head. There are more than a dozen overt references, including, "'The reason the system can't be overthrown in this country,' said Walter, 'is all about freedom,' " and, "[Walter's grandfather]… loved his freedoms (to drink, to smoke, to hole up with his buddies in an ice-fishing hut)" and, most succinctly, from a pro-Israel capitalist, "'Freedom is a pain in the ass.'" The novel could be retitled The Trouble with Freedom.

Despite all of its many ethical crises, both personal and political, and love souring to hate and back again, Freedom never achieves the sense of tragedy of that iconic novel of the middle-class suburban dream cracked asunder: Richard Yates's searing Revolutionary Road. Unlike that novel's April Wheeler, and Humpty Dumpty, Patty and the other Berglunds can be put back together again.

Franzen is more than capable of virtuoso writing. The Corrections went from one brilliant and indelible extended scene to another, and Freedom opens with a deliciously malicious set piece - an overview of the Berglunds from the point of view of their neighbours - so I get the sense that he has deliberately tamped down the prose stylings. To be literary and popular, that's the tasty pie in the sky many writers would love to have and eat, but some are unwilling to compromise while most others simply aren't talented enough.

Franzen's coup is that he has figured out how to be both entertaining, sharp-witted and accessible while maintaining a sense of higher purpose. I thoroughly enjoyed this intellectual soap opera of love, sex, liberal guilt and flawed parenting (viz. Philip Larkin), and got sucked into the travails of the Berglunds and their constellation, including: Joey's mentally unstable but delightful girlfriend, Connie, and his Veronica-Lodge-type temptress, Jenna, the apical Jewish-American Princess; Lalitha, Walter's whip-smart, lethally beautiful and politically committed Bengali-American assistant; and the bad boy indie rocker Richard Katz, Walter's best friend and nemesis, and the one genuinely tragic character due to his high degree of self-awareness and inner BS detector.

Franzen's literary progenitor here is not Roth, with his roaring voice, nor the postmodernists Pynchon and DeLillo. He's a populist, an old-style novelist casting a gimlet eye on contemporary mores, a 21st-century Midwestern Herman Wouk (another Time cover boy, in 1955 after the success of Marjorie Morningstar).

What's most interesting about the raves for Freedom out of the U.S. is the underlying, palpable hunger for a(nother) Great American Novel. But what are Rick Moody's The Diviners and new The Four Fingers of Death, Jonathan Lethem's The Fortress of Solitude, and Jeffrey Eugenides's The Virgin Suicides and Middlesex? And David Foster Wallace's Infinite Jest?

(Ah, these aren't strictly "realist" novels and are largely satirical, you say. And so? Most tellingly, these are not, for the most part, novels of the white, American, suburban, middle-class family.

Also interesting is that there are no American women of the generation of Franzen et al. or older who appear as interested in the fat social novel, that part-donkey, part-elephantine beast known as the Great American Novel, as the menfolk are. (I would go into detail here if not for space constraints and those cat o' nine tail-wielding Barbara Kingsolver fans at my heels.)

So by all means, Time, put Franzen on the cover, but alongside Moody, Lethem and Eugenides, the four of them photo-shopped as Mount Rushmore. And that cloud overhead with a penumbra flashing at its edges? That's the shadow of the inimitable and uncompromising DFW, who burned so very bright for too short a time. 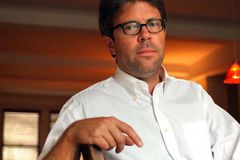 The backlash: Say hi to Franzenfreude
September 4, 2010
Follow us on Twitter @globebooks Opens in a new window
Report an error Editorial code of conduct
Due to technical reasons, we have temporarily removed commenting from our articles. We hope to have this fixed soon. Thank you for your patience. If you are looking to give feedback on our new site, please send it along to feedback@globeandmail.com. If you want to write a letter to the editor, please forward to letters@globeandmail.com.
Comments