In 2001, humorist John Hodgman posed a question to listeners of public radio show This American Life. Which superpower is better, the ability to fly or to be invisible? Those who answered found themselves channelling deep-seated yearnings that reveal much about the human condition. We crave both popularity and privacy, both freedom and security. And to have one we must trade the other.

It's interesting to imagine where such a discussion might lead if a third superpower were on offer: the ability to travel in time. For my money, I think it would win hands-down.

We are the species blessed with big brains which we can wield like supercomputers to simulate events and discern what is likely to happen next. We are gamblers at destiny's table, spinning scenarios and laying our bets. But our simulations are imperfect. Our calculations truncated. The best laid plans, etc.

What could be more alluring than having the power to load the dice in our favour by reliving past events in order to make sure we get them right? Or to move ahead and glimpse the future so that we can know precisely how to cash in on a golden opportunity or a avoid a disastrous end.

It stands to reason, then, that the dream of time travel is an ancient preoccupation. But in his exploration of the subject, James Gleick discovers to his amazement that it is not. The reasons are both subtle and fascinating.

Time travel is such a common trope in science fiction and fantasy – arguably now the dominant genre in popular storytelling – that it's hard to imagine the idea was ever new. Yet, from Michael J. Fox's chronology-bending DeLorean to Harry Potter's magical "time turner," Gleick argues that the core concept underlying time travel invariably traces back to one source: H.G. Wells's novel, The Time Machine, first published in 1895.

Equally astonishing is the way that Wells so presciently lays out the notion of time as nothing more than another dimension, like the three familiar dimensions of space.

In the novel, Wells's protagonists challenges his skeptics with the question, "Can an instantaneous cube exist?" His point is that length, breadth and thickness are not sufficient. To be real an object must also have extension in time. And if time is like a distance, then it can be traversed, both forward and back. Based on this premise an enthralling adventure (dosed with Victorian-era social commentary) ensues.

A dozen years later the same concept would become firmly enshrined in modern physics thanks to the Polish-German mathematician Hermann Minkowski. It was Minkowski who saw that a marriage of space and time was the most convenient way of dealing with the revolutionary new theory of special relativity developed by former student Albert Einstein. Physicists have not looked back since. Today, a search for the term "time travel" in the online archive most favoured by theorists yields more than 50 scientific papers from this year alone.

These days, scientists are not so much trying to build time machines as they are trying to sort out why such contraptions shouldn't exist. As Stephen Hawking observed, if time travel is possible why are we not inundated with tourists from the future? His answer is that the laws of physics must somehow rule out dangerous violations of causality. Yet, efforts to prove Hawking's "chronology protection conjecture" have so far come up empty.

Gleick has a different quest in mind: understanding the uncanny way that Wells anticipated the physicists. It's not a coincidence that time travel would pop up just over a century ago, he writes, "There was something in the air."

That "something" includes industrialization – note that the time traveller employs a machine, not an innate superpower. And at a deeper level lies a transformation in the history of human affairs. Not until the 19th century is technological innovation moving at a pace where the future no longer looks like the past. It's this change that makes time a dimension worth travelling.

Gleick is a bestselling author who first achieved fame with Chaos, his 1987 book that indelibly captured a revolution in the way scientists think about non-linear phenomena like weather or the stock market. In Time Travel, he demonstrates why his kind of science writing endures in an era when a decent explanation for everything from the human digestive system to the Higgs boson is now just a Wikipedia entry away.

A science book that demands to be read is one that expertly reveals the characters, perspectives and hidden connections that make our world. That's the essence of Gleick's craftsmanship, and it's what makes great science writing timeless. 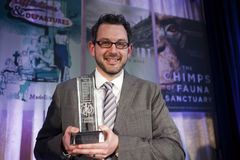 Review
Review: Tim Falconer’s Bad Singer is a treatise on understanding our bodies and their true limitations
July 15, 2016
Follow Ivan Semeniuk on Twitter @ivansemeniuk
Report an error Editorial code of conduct
Due to technical reasons, we have temporarily removed commenting from our articles. We hope to have this fixed soon. Thank you for your patience. If you are looking to give feedback on our new site, please send it along to feedback@globeandmail.com. If you want to write a letter to the editor, please forward to letters@globeandmail.com.
Comments